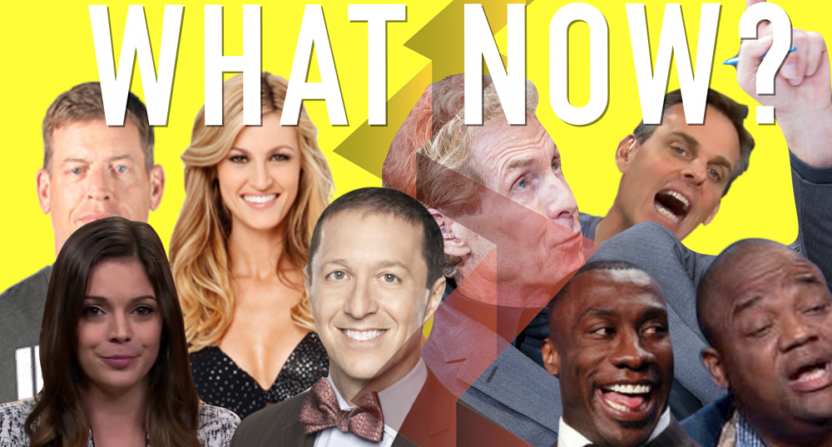 The shocking firing of Jamie Horowitz has shaken Fox Sports and the industry as a whole. Horowitz was already under pressure after the FoxSports.com website rollout was one of the most widely panned in recent sports media history. Just last week, Awful Announcing published the inside story of Horowitz’s Fox Sports Digital transformation that was much more flop than flip.

At least 20 sources from Fox Sports Digital chronicled Horowitz’s tumultuous takeover of the online brand that turned Fox Sports from one of the mainstream sports leaders on the web to a mishmash of Fox branded potpourri. While Horowitz’s vision for Fox was certainly under fire from all sides, both on television and online, nobody could have ever envisioned that he would be abruptly gone from the company less than seven days later.

Now Horowitz and Fox appear to be headed for a drawn out and acrimonious divorce with accusations of sexual harassment at the center of his controversial departure. It’s just the latest harassment claim at a Fox company after Fox News has been embroiled in scandal after scandal that has taken down Bill O’Reilly and Roger Ailes. And don’t forget that FS1 reporter Colleen Dominguez was also at the center of an age and gender discrimination lawsuit on the sports side. First and foremost, Fox now has to deal with serious questions about their culture as an entire company across multiple networks.

But from the sports media side, given how much Fox Sports has invested into Horowitz and Embrace Debate 2.0, it can’t be overstated how much of a disaster this is for the company and for their increasingly futile quest to take on ESPN.

When Fox hired Horowitz, he immediately transformed the network into his image. After a couple years of plodding along as FS1 failed to gain much buzz and traction nationally, Fox made a huge splash in hiring Horowitz and becoming more aggressive in their strategy. Gone were FS1 originals like Jay Onrait and Dan O’Toole. Gone was any sense of trying to build an “alternative” to ESPN. Instead, with Horowitz at the helm, FS1 would turn into a very expensive, yet poorly executed, imitation of the debate-dominated programming he unleashed on the masses at ESPN.

Millions of dollars were splashed on the likes of Colin Cowherd, Skip Bayless, and Jason Whitlock. Outside of live events, FS1 became the home for hot takes. And while these big personalities have increased FS1’s ratings somewhat, they still lag far behind ESPN. All of the talking head programs routinely draw below 100,000 viewers, which is a mere blip on the cable radar.

From the beginning, it’s been easy to see that this is not a winning strategy in the long run. Fox turning the reins to Horowitz gave the network minimal short term gain with minimal long term potential for growth. There has to be only a handful of sports fans that are willing to change decades long viewing habits and switch from ESPN to FS1 to watch Bayless, Cowherd, and Whitlock debate the same topics into the ground, continue personal feuds, and tout conspiracy theories. Dollar per viewer, it’s difficult to say Embrace Debate 2.0 is worth it when so many fans are equally as turned off from FS1 in the process.

Now without Horowitz guiding the ship, what happens to all of his former ESPN cohorts who came to the network to work with him? Do they try to plod along without the man responsible for putting it all together at the helm? Do their contract statuses allow for changes to be made without Horowitz in charge? If so, what happens if Bayless, Cowherd, etc. actually want out and want their spots back at ESPN after finding out the grass isn’t actually greener on the other side? What happens if Fox tries to go in a different direction to try to get the bad taste from the Horowitz Era out of their mouths? These talking heads literally fill almost the entire day of programming for FS1 between live airings and replays. Is it too late to bring back The Best Damn Sports Show, Period?

FS1 has already tried being “The One for Fun.” They’ve now tried Embrace Debate 2.0. Neither has worked out too well. Approaching their fourth anniversary, do they dare try to make yet another pivot and go in yet another direction? If trying to surpass ESPN is like running a marathon, FS1 can’t even figure out how to get to the starting line.

The burning rubble that is FoxSports.com

And that’s just on the television side. What about the website? The ruins of FoxSports.com is part of Horowitz’s lasting “legacy” at Fox Sports. By now, you hopefully know the story of how Horowitz took over the website and left it as nothing more than a promotional vehicle for the television channel by going to an all-video strategy and completely ridding the website of written content.

After a week of seeing what’s on the all new FoxSports.com it’s safe to say that the company found one of the quickest and most effective ways to destroy the relevancy of a website overnight.

It’s not like Fox can just go back to all those writers and content creators and say, “Let’s just pretend none of this ever happened. See you next Tuesday!” The toothpaste is already out of the tube. Bruce Feldman is already writing for SI.com. It’s not just as easy as hitting the rewind or reset button.

Horowitz may be gone, but what about all the changes behind the scenes that are already in place? What about hiring new writers and content creators? What about executives that Horowitz brought in himself across the company? Does Fox just forget the website for now and try to stabilize their television network? FS1 is between the ultimate rock and a hard place because the longer they go with the website in the current shape it’s in, the harder it will be to win fans back that have already checked out.

We’re talking about layers and layers of structures and systems and staffing that might take months, if not years, to rebuild if Fox even wants to bother trying to take that on. And even if Fox Sports does find a way to bring their website back to where it was, the damage will have already been done.

What’s possibly next for Fox Sports and FS1?

Speaking of damage being done, it’s going to take a long time for Fox Sports to recover from the Horowitz Era. Yes, Horowitz had success at ESPN. But after he was let go by NBC before even starting at the Today Show in one of the shortest and most disastrous executive tenures in network television, Fox had to know that an implosion of epic proportions was a distinct possibility. The hard truth is that the network has nobody to blame but themselves for creating a house of cards that could tumble at any moment.

This is what Fox has left for themselves after refusing to play the long game. Instead of sticking with it and trying to build FS1 as a true alternative to ESPN, Fox got impatient after just a couple years of slowly building FS1.

It’s going to take decades for Fox to realistically challenge ESPN and build a rights portfolio that can really compete with Bristol. With the entire industry going through significant turmoil and change, why not save the money invested on Bayless, Cowherd, Horowitz, etc. and invest it into digital or live streaming or actual sports rights? Why not slowly build up your rapport with sports fans until the major rights deals become available? Why not be patient and do almost anything else but putting all your chips behind Embrace Debate 2.0 for your entire company? Because Fox is currently seeing how that decision is playing out.

Coming up on their fourth anniversary next month, it’s hard to imagine a worse week for any sports network than Fox has just experienced. Yes, ESPN laid off dozens of on-air personalities earlier this year in one of the darkest times in that network’s history, but at least ESPN still has an identity. The Horowitz Era has left Fox in the wilderness wondering which way to go from here.

It looked so promising for FS1 at the start. The network had so many hopeful and optimistic fans hoping that their presence would not only provide an alternative on the national sports scene, but challenge all of their competitors to be better. At least FS1 still has some decent sporting events to try to hang their hat on, like the World Cup coming up next year, but the brand has been unmistakably tarnished through this drama with perhaps more fallout to come.

How does Fox Sports even begin to pick up the pieces? What happens to FS1? What happens to FoxSports.com? Where does the network even try to go from here? These are questions that don’t have easy answers right now, if they even have any answers at all.