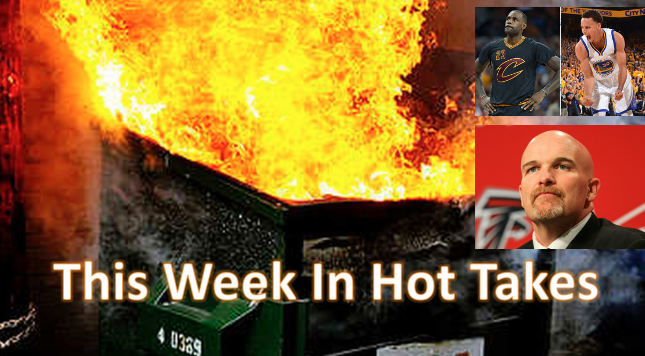 Welcome to another edition of This Week In Hot Takes! Everyone has a fiery take these days; here are some of the hottest from sports media figures for the week of Feb. 3 – 9.

5. Rob Parker says Tom Brady isn’t the G.O.A.T., but rather the L.O.A.T., the “luckiest of all time”: Our old friend Rob Parker has been known for bringing the fire, and he did so again this Monday with a piping-hot take on Tom Brady following the Patriots’ Super Bowl win. He even brought the t-shirt:

Brady certainly has had plenty of help in achieving his record five Super Bowl wins, from coaches to receivers to linemen to  running backs and defensive players, but he also has a record four Super Bowl MVP awards, so he’s played a pretty big role in those wins too. That was the case Sunday, as he threw for 466 yards and two touchdowns Sunday to lead New England to the biggest comeback in Super Bowl history. Not everyone has to unanimously anoint Brady as the greatest ever, but cases why he isn’t should have a little more logic and analysis behind them than this, which is basically just a rant about Brady being lucky, and one that ignores the lucky moments that went against the Patriots.

Colin Cowherd actually defuses this argument nicely by pointing out that the Seahawks’ much-criticized goal-line playcall and New England’s “lucky” interception two years ago came after a ridiculous catch by Jermaine Kearse, one that certainly involved some luck itself. (And speaking of that, how about the David Tyree and Mario Manningham ones in Patriots’ losses? Yes, every close football game comes down to close plays and close calls. Some of those have worked out for the Patriots, some haven’t. But Brady has played a key role in their success, and arguing that he’s just lucky is more of a hot take than actual insight. Especially when you bring a homemade T-shirt to that effect.

4. Charles Barkley ranks Klay Thompson over Steph Curry: Barkley has long been known for his Curry-bashing, but he took it to particularly funny heights Thursday on TNT during his rankings of the current top 25 players, saying he’d take Warriors’ backcourt mate Klay Thompson (sixth) over Curry (seventh) because “he’s a better all-around player”

That’s baffling, as Kenny Smith points out during the clip. Thompson is a fine player, but he has a career PER average of 16.2 to Curry’s 23.3, and trails this year (16.1 to 24.5) as well. He also is behind Curry in most of the basic stats, and has two All-NBA Third Team appearances, while Curry became the first unanimous NBA MVP last year, has two MVP awards overall, and has two All-NBA First Team honors. Awards aren’t everything, but arguing for Thompson over Curry feels more like a vendetta against Curry than anything else.

3. Skip Bayless says LeBron is “boycotting” a TNT game “to get even with Charles Barkley”:

.@RealSkipBayless: LeBron James is boycotting a Thursday night, nationally-televised basketball game to get even with Charles Barkley. pic.twitter.com/BxWi1FkIXU

“I don’t know that for a dead-solid fact” could be the Undisputed motto. You don’t think LeBron probably has more to think about than just Barkley? Resting players always produces some hot takes, like Tony Kornheiser calling an earlier Cavs’ rest “a disgrace” back in December, but the hilarious part here is that LeBron, Kyrie Irving and Kevin Love wound up playing Thursday night in Oklahoma City anyway, recording 40, 34 and 30 minutes respectively. Of course, Bayless probably thinks they did so because of him. (It didn’t help the Cavs in the end anyway, as they lost 118-109 to the Thunder. Maybe they should have rested James and the others.) At least this was a nice break from Bayless’ continual ranting about the Cowboys and how Jerry Jones is going to start Tony Romo next season (also something Bayless doesn’t know for a dead-solid fact.)

2. Clay Travis says he’s “yet to hear a current athlete with a coherent political opinion”:

I've yet to hear a current athlete with a coherent political opinion. So why do we keep listening to them? https://t.co/1p1NM3Rsny

The post in question is headlined “Under Armour CEO Provokes Left Wing Fauxrage By Commenting on Donald Trump,” and features the delightful subhead “The left wing sports media has lost its mind again” (should have used a hyphen there, C’lay, unless it’s now Outkick The Punctuation), a remarkable feature on a site that still has “College Football Blog” under its name. The post also includes “Does anyone who isn’t a Marxist really disagree with this? Are there tons of people out there who want an anti-business president?” Yes, Clay, there are non-Marxists who don’t believe in unfettered capitalism. But the larger point here is that he’s really bashing athletes’ political opinions (particularly Steph Curry’s in this case) not for the quality of their arguments, but because they don’t agree with his own. And sure, the masses do listen to incoherent opinions from time to time, but that does more to explain why Clay has a radio show than to criticize athletes’ often well-constructed political stances and arguments.

The Falcons’ decisions in Super Bowl LI can be criticized, certainly, but calling for firing a head coach after he led them to an 11-5 mark and a Super Bowl appearance in just his second year, plus after they played well for three quarters and eventually only lost in overtime? If that deserves a firing, every coach other than the one who actually wins the Super Bowl should be fired every year. This is hot air for the sake of hot air. When even Skip Bayless is surprised by your take, you might want to dial it down a little.

Honorable mentions this week include Kentucky Sports Radio’s Drew Franklin calling LaMelo Ball’s 92-point night “an insult to James Naismith“, CBS/SI’s Seth Davis saying Grayson Allen has “been through a lot“, and Jeff Passan saying Jeffrey Loria “sprayed the stench of his naked greed across baseball like the skunk he is” (he’s not necessarily wrong, but that kind of language is a pretty hot take). Notable absences this week include Stephen A. Smith and Phil Mushnick. Welcome back to the lead, Clay. And congratulations to Fox Sports for occupying four of the five spots here this week.