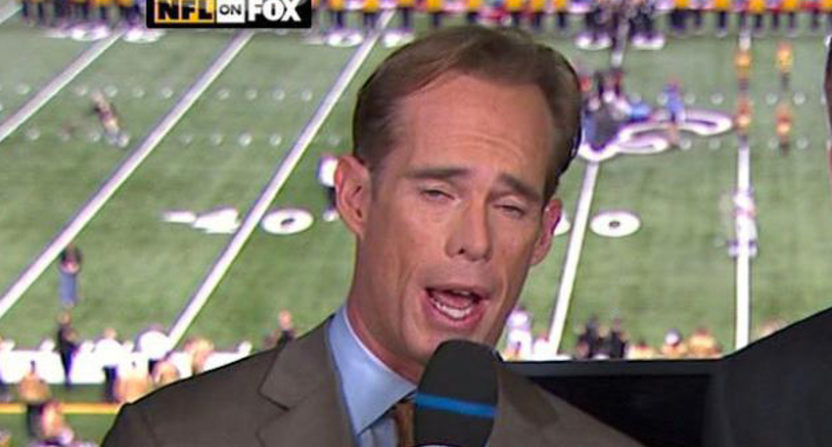 Baseball and Fox. It’s a tradition that’s lasted since 1996. And through that partnership, it’s meant that it’s time for live promo reads from Joe Buck. It’s an annual rite of passage, Buck reading promos for Fox whether it’s during the All-Star Game, League Championship Series, or World Series.

The network has used primetime baseball as a promotional vehicle for its shows. Some have gone on to be big hits like The X-Files, 24, Beverly Hills 90210, and Empire, but others have gone by the wayside and are long forgotten. However, thanks to Matthew Callan, we have Buck reading promos (some more enthusiastically than others) for various shows.

Some of the transitions from the reads are so awkward like “…. two outs, bases empty for Jose Offerman …”

Let’s break down some of these shows, and man were there a lot of them: 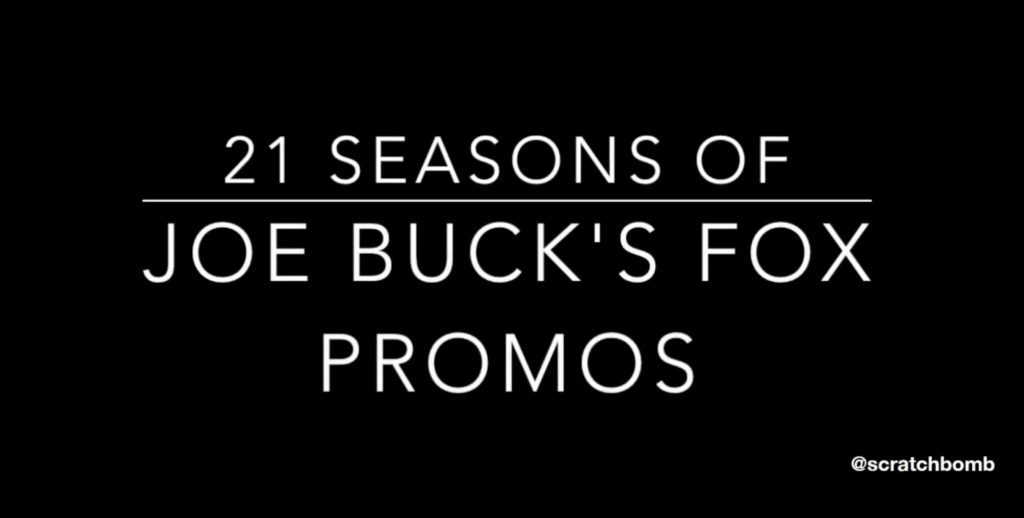 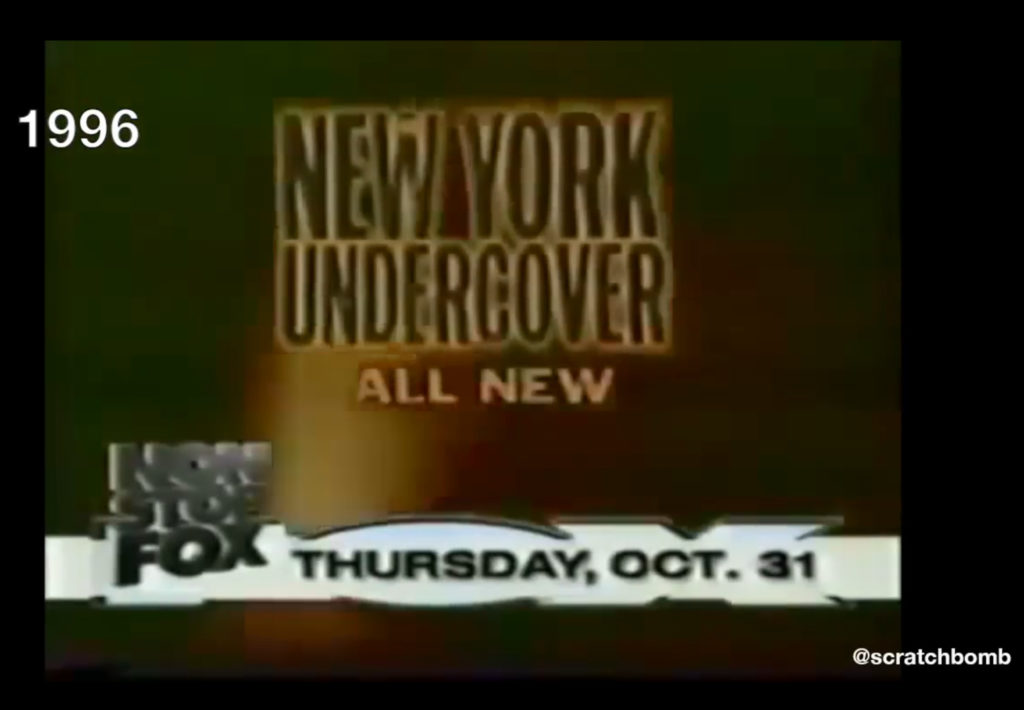 This show actually ran for five seasons between 1994 and 1999. Michael DeLorenzo played Detective Eddie Torres, while Malik Yoba was Detective J.C. Williams. According to IMDb, both of them walked off the job and Executive Producer Dick Wolf threatened to fire them, but things worked out. New York Undercover may not register in the police drama genre, but it did last awhile. 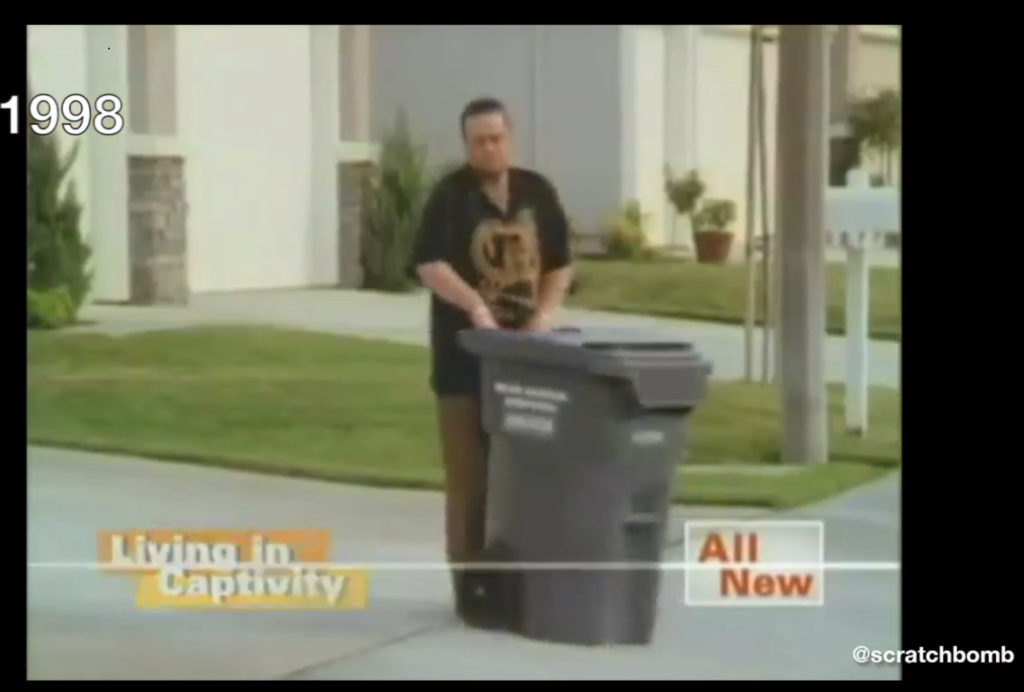 Do you remember Living in Captivity? Of course you don’t. It only lasted eight episodes. This was the concept, according to IMDb:

“Curtis, a successful DJ, and his pregnant Tamara integrate the upscale community of Woodland Heights. They make friends with an Italian couple Lisa and Carmine plus attorney Becca with her novelist husband Will, who are in a mixed religion marriage. Everyone gathers at the local grocer to gossip and make outrageous comments.”

It’s no wonder why this didn’t last. 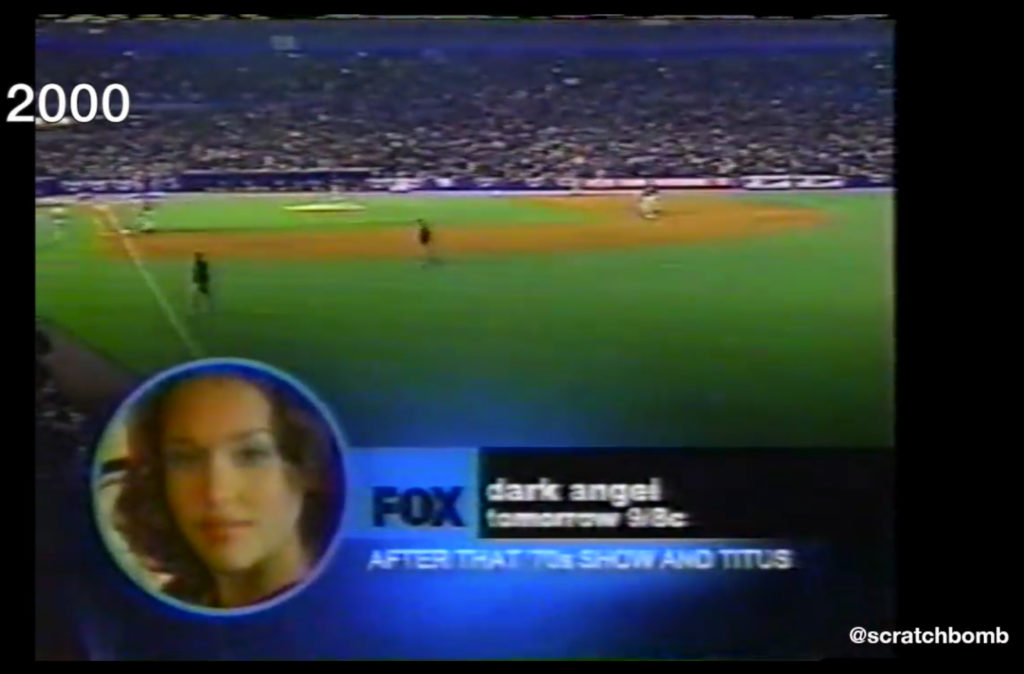 Personally, this was one of my guilty pleasures. The show made Jessica Alba a star. It lasted from 2000-2002 and also starred Michael Weatherly, who later made his name in NCIS and now, Bull. I can still see Alba starring as Max on my TV screen. Ok, let’s move on. 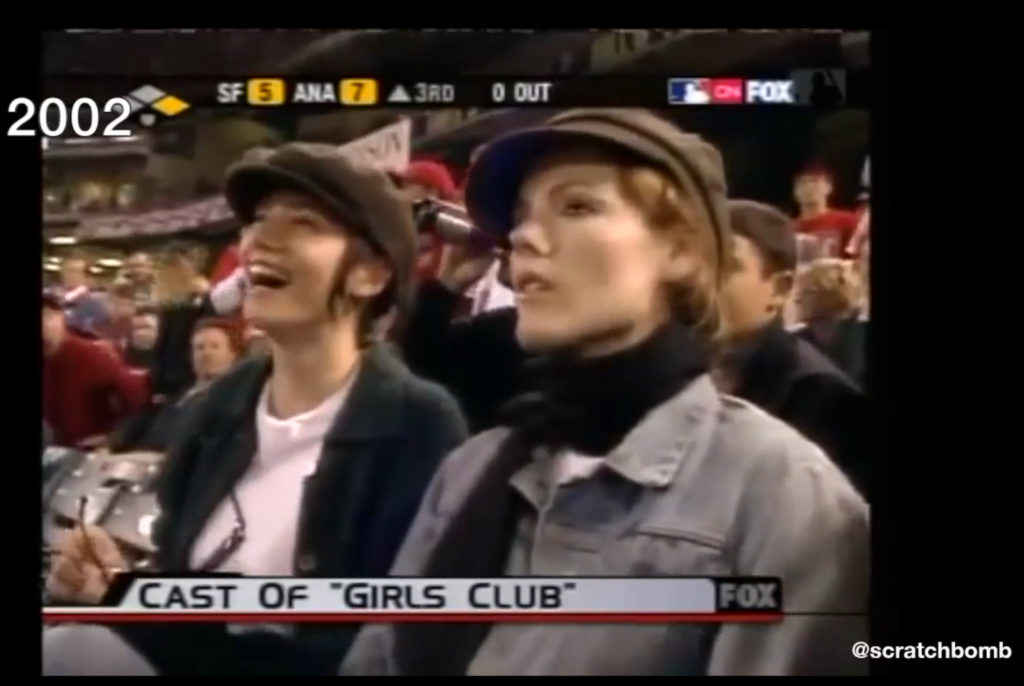 Another part of those live promo reads was to show the cast of said show in the stands. It was one of those hits that attempted to show the stars as sports fans. There was that time when Calista Flockhart of Ally McBeal was shown eating to offset reports that she was anorexic.

There was that time when Fox put Chyler Leigh (now of Supergirl fame) and former 90210 star Kathleen Robertson in the Anaheim crowd during the 2002 World Series to promote “Girls Club,” a show about three young women working at a San Francisco law firm. It only lasted nine episodes. 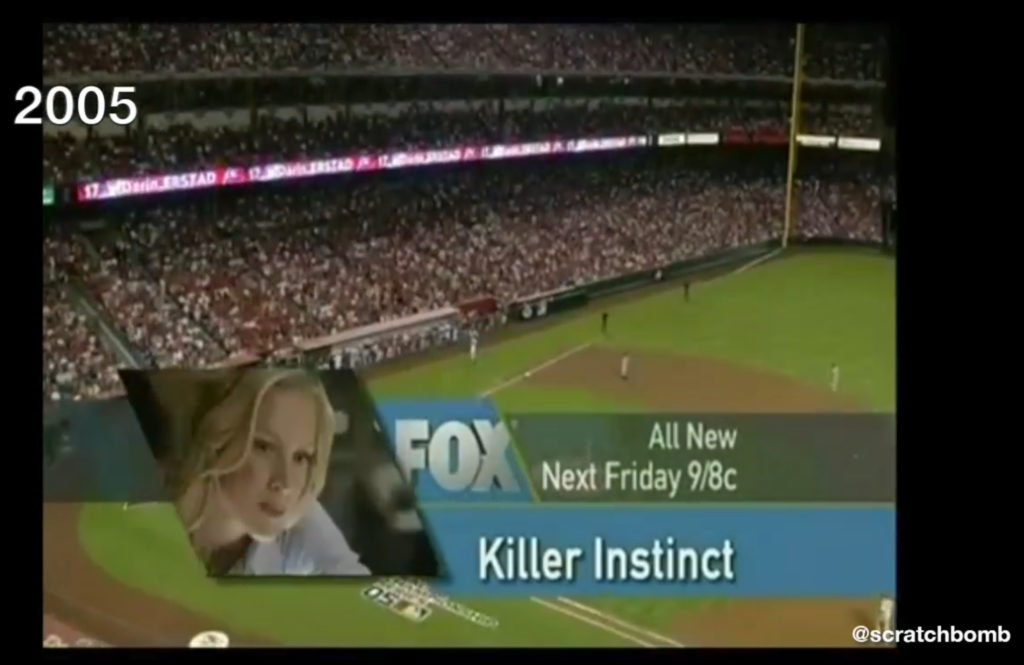 In hopes of copying CSI’s success, this show about San Francisco cops investigating the city’s most bizarre crimes lasted longer than Girls Club, but by only four episodes. 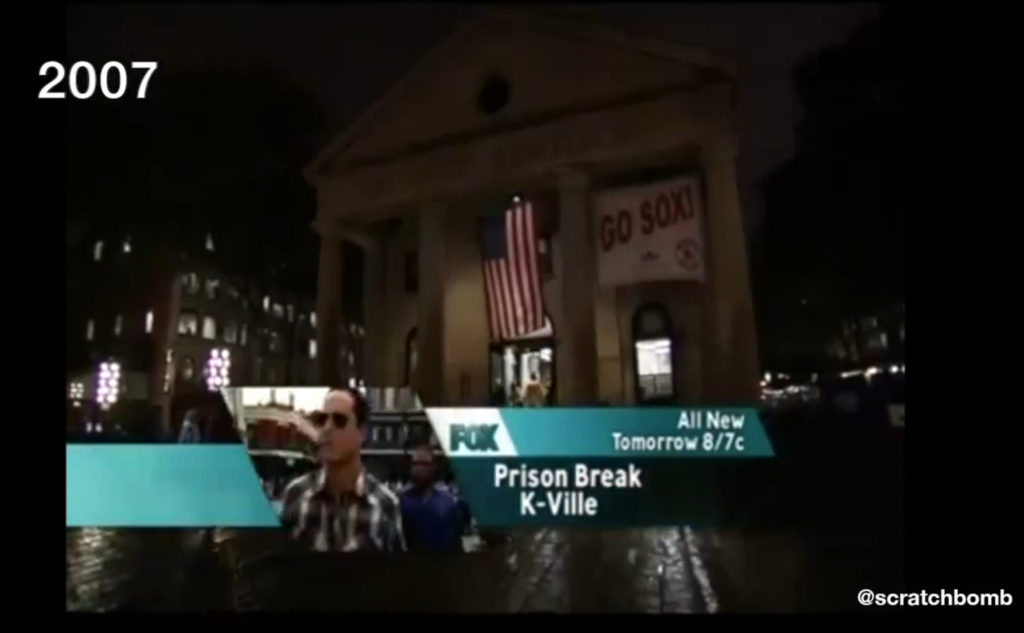 While Prison Break turned out to be one of Fox’s most successful shows, even getting a revival this season, K-Ville with Anthony Anderson (now of blackish) and Cole Hauser was not. It went 11 episodes but the premise wasn’t all that bad – two cops patrolling New Orleans in the wake of Hurricane Katrina. 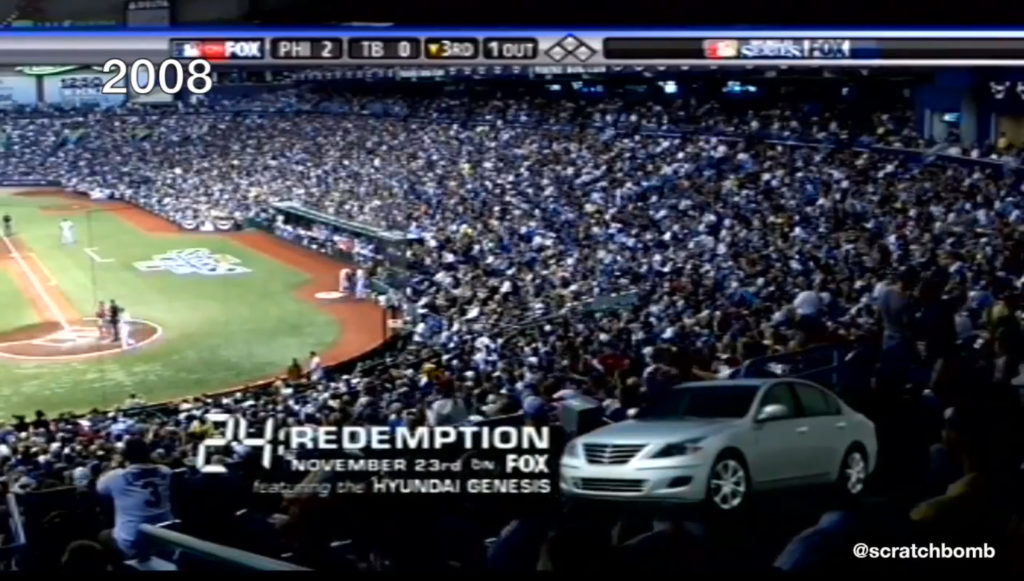 While 24: Redemption was part of the great 24 series, I’m only including this for the Hyundai Genesis product placement. 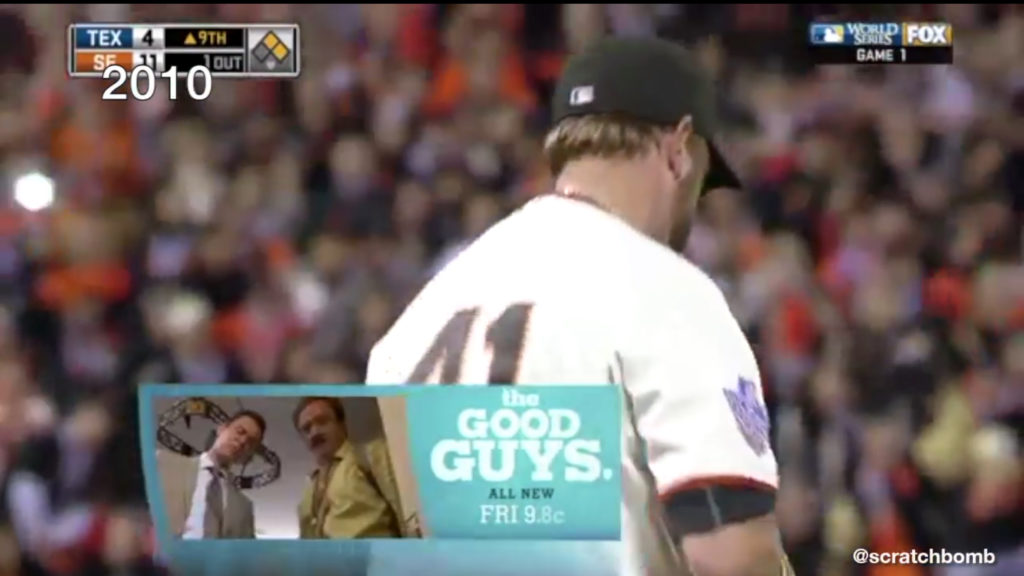 “Jack is a by-the-book detective whose habit of undermining himself has resulted in a dead-end position with the Police Dept. His partner Dan, a drunken, lecherous veteran hangs onto his job only because of one heroic act years ago.” 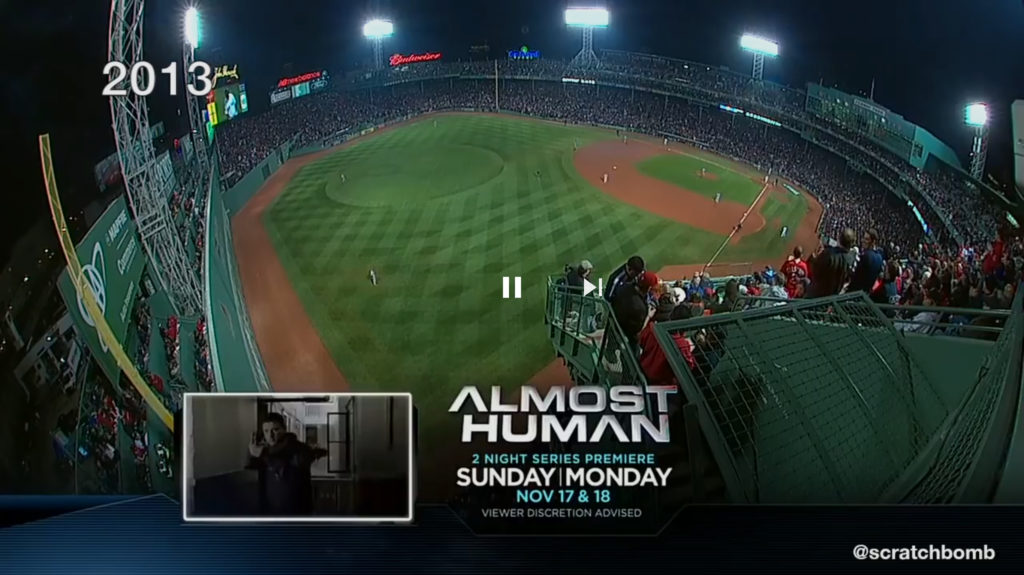 I have to use the IMDb description again: “In a not-so-distant future, a human cop and an android partner up to protect and serve.” 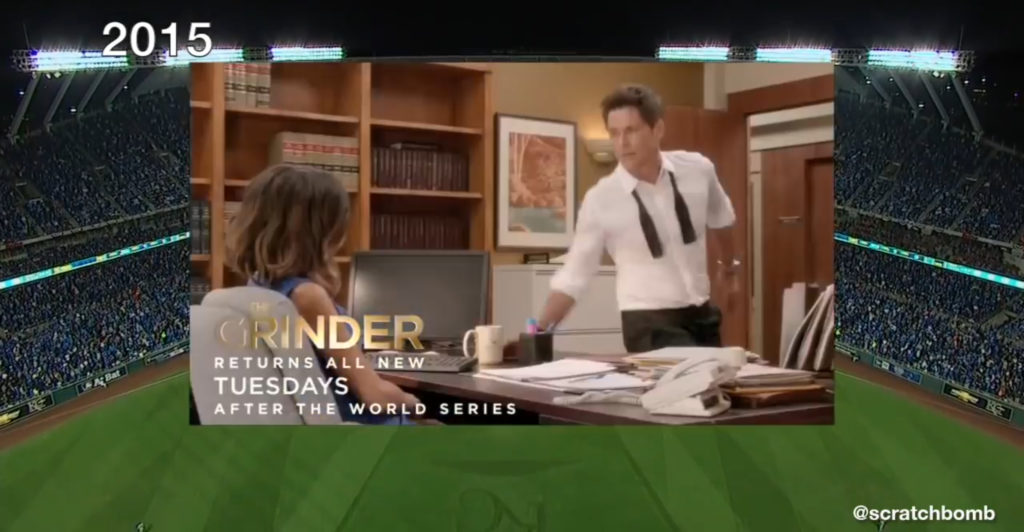 Fox had big hopes for The Grinder, which co-starred Fred Savage and Rob Lowe. It only lasted one season.

A big hat tip to Matthew Callan for doing yeoman’s work on the video.