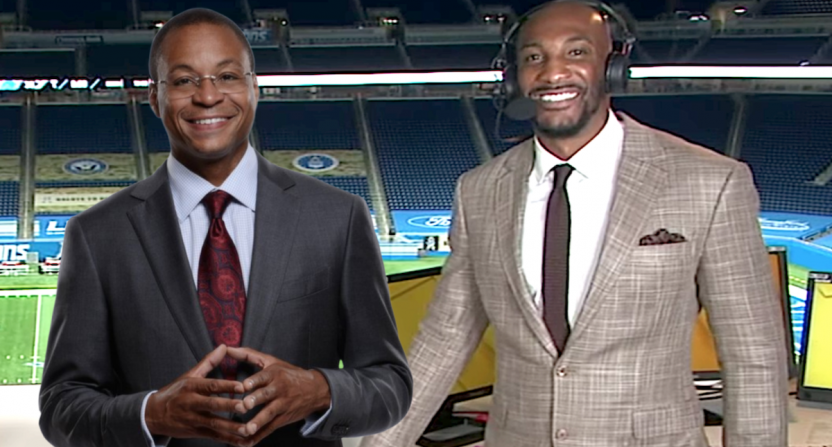 After a promising debut in the Fox NFL broadcast booth last season, Aqib Talib will call more games during the 2021 campaign. And though he won’t be a regular part of the rotation, Talib will be paired with Gus Johnson for all of his assignments this season beginning with Week 2’s telecast of the Vikings at Cardinals match-up.

Having a regular play-by-play partner should help establish some continuity in Talib’s fledgling broadcast career. And as Johnson explained to Richard Deitsch on his Sports Media Podcast, that gives him an opportunity to take a personal investment in helping Talib to improve his skills.

“Aqib is raw in some areas, but he’ll get refined and he’ll get better,” Johnson told Deitsch (via The Athletic). “We’ve already started talking about some of the things that he can work on when it comes to diction and all that stuff. But I don’t specifically want to change him at all because I think right now he’s perfect for me and for us at Fox.”

Football analysis, especially on game broadcasts, is dominated by former quarterbacks and offensive players. Tony Romo, in particular, often predicts plays based on the formations he sees. Talib is one of the few defensive players calling games, so Deitsch asked him if he takes a similar approach when calling a play.

“Before the play, I’m trying to get a good gauge on what these guys are in on defense,” said Talib. “Then as they snap the ball, I kind of stamp what I think the defense is. I see how the safeties move and see what coverage it is. Then I try to get back to the quarterback and the line to see if there is pressure. So I’m starting with the DBs, then the snap of the ball happens, and then I move to the O-line, D-line, and quarterback area.”

Aqib Talib on what he looks for while watching a play from a defensive standpoint: pic.twitter.com/6OMQkMQcTl

Though Talib might get more attention from media and fans as a new, still developing analyst, Johnson is working a busy schedule to fit in these NFL broadcasts alongside his college football work for Fox. And no, he’s not calling NFL games on weekends when he’s not doing a college game.

This coming weekend, for example, he’ll call Nebraska-Oklahoma with Joel Klatt and then work the Vikings-Cardinals match-up with Talib. He explained his preparation process to Deitsch, which sounds like a lot of work but he does keep that in perspective.

“I want to get the NFL stuff done early in the week. When I hit the college town all my focus is going to be on the college game and putting the boards and the rosters together,” said Johnson.” I’m just doing it all at the same time. It’s an incredible opportunity. It’s my job. It’s my love. It’s my passion. I’m a real lucky dude to have an opportunity to watch football and there are a lot of people out there in this world that love football.”

Gus Johnson on his preparation when he calls college football and NFL on the same weekend: pic.twitter.com/tI7TWyM5k6

Deitsch’s entire interview with Johnson and Talib is worth listening to for some insight into how a broadcast pairing develops a working relationship and on-air chemistry. This one might be a bit different because of Johnson’s higher profile and Talib having done so few broadcasts. How they sound from their first game through their final assignment of the season should be worth following.