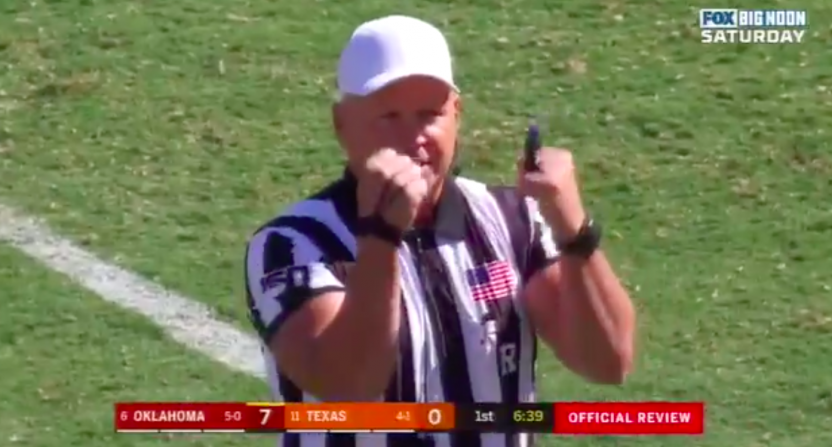 Even if you don’t know Mike Defee by name, you probably know him by his arms. Gus Johnson certainly does.

A few years back, Defee made headlines while officiating the 2017 national championship between Clemson and Alabama with his sizable guns that could give Ed Houcholi a run for his money. Known as Beef Ref, Defee’s arms even earned themselves their own short-lived Twitterfeed. And although the hype surrounding this swole referee died down, those biceps have not.

They and Defee were on display Saturday when the head ref found himself in the middle of a pre-game scuffle between the Texas Longhorns and Oklahoma Sooners as Red River Rivalry tensions boiled over before the game even started. After the kerfuffle, Defee hit every player on both teams with an unsportsmanlike conduct penalty, ensuring that if anyone gets another one during the actual game they are immediately ejected.

Official Mike Defee tells Texas and OU captains before the coin toss: "You will play this game with sportsmanship. Are we clear?"

I am not making this up.

So far, cooler heads have prevailed and the game is being settled the old-fashioned way on the field. Gus Johnson is calling the game for Fox and, as Gus is wont to do, he made sure to give Defee a shoutout and remind us all that Beef Ref was always still here.

“Defee has continued his hard work in the weight room…he’s JACKED!”

LOL. Gus Johnson: “Well, there is another reason to take a look at the play, that’s to get another look at Mike Defee. He’s obviously working on the biceps… now over to our own guy, Mikey Rulebooks."

Back in his element, Gus is doing plenty of other Gus Things during the broadcast so far and (most) fans are enjoying it.

Dicker the Kicker as time expires (in the first half) 🤣 pic.twitter.com/lpfdAalUBg

As a bonus, Gus even pronounced Jose Altuve’s name correctly this time, so you know he must be feeling it.

My main thing I’ll be watching today in #OUvsTEX on FOX — will Gus Johnson get another crack at pronouncing “Altuve” correctly? https://t.co/iqaOj5zXsh