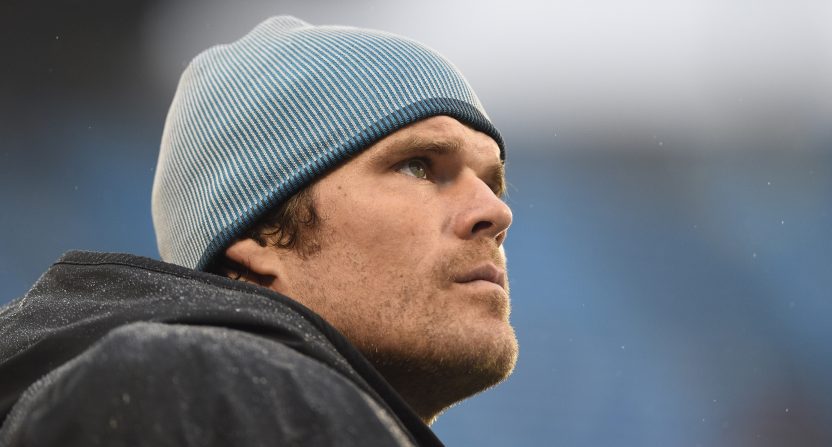 The story of “Greg Olsen, NFL game analyst” is *almost* as old as the story of “Peyton Manning, NFL game analyst.” Olsen has been flirting with the broadcast booth since 2017, working for Fox as a game analyst while injured that season, working as an ESPN guest analyst in the lead up to the Super Bowl a couple months later, and auditioning for the Monday Night Football job that eventually (and briefly) went to a different tight end.

Olsen put an end to the broadcasting rumors for 2020 by signing a one-year deal with the Seahawks for this season, but his post-playing future (whenever that may come) is reportedly set. The New York Post reports that Olsen will be heading to Fox Sports as an NFL game analyst, and that he’ll work with incumbent #2 play by play man Kevin Burkhardt. Burkhardt had previously worked with Charles Davis, who left Fox for CBS earlier this year. Olsen joined the Burkhardt and Davis duo for that 2017 game, and also called XFL games earlier this year with Burkhardt.

This arrangement is similar to the one Drew Brees has with NBC. Earlier this year, the long-time Saints QB agreed to join NBC Sports as an NFL analyst once he retires.

The Post also reports that Daryl Johnston will work with Burkhardt as a bridge to Olsen, whether he joins for the 2021 season or sometime after that. Johnston has worked with Chris Myers and Laura Okmin since the 2017 season and spent years working with both Dick Stockton and Kenny Albert.

The NFL on Fox lineup is now starting to come together for the 2020 season, and with Johnston moving up to work with Burkhardt this year, it’s looking like newly hired Adam Amin could work with someone like Mark Schlereth, while Albert works with newly hired Jonathan Vilma. That still leaves Myers and Stockton without partners (or Myers and Amin, if Fox doesn’t break up the Stockton and Schereth team), but the network employs enough NFL studio analysts (and there are plenty of ex-players out there who could look for broadcasting work) to get the job done.