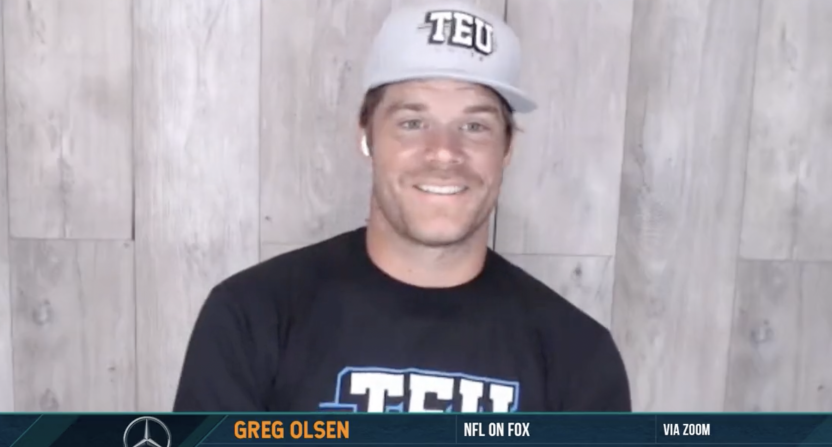 Greg Olsen will presumably get his day in the sun when he calls Super Bowl LVII with Kevin Burkhardt next February. However, that day will be short as Olsen will eventually lose that coveted spot in Fox’s No. 1 booth to Tom Brady when the NFL legend eventually retires (for real).

There isn’t much that Olsen can do to change what’s coming. In spite of his quality work up until now and regardless of how well he performs in the days ahead, Brady’s aura and contract leave no doubt that Greg will be shuffled down to the No. 2 booth when that day comes.

You wouldn’t blame Olsen, who seemed very deliberate in his decisions about where he worked as a broadcaster, for feeling bitter about the whole situation. However, he appears to be handling things as gracefully as one can.

The 37-year-old made the media rounds this week and shared some interesting thoughts on Brady’s impending arrival and what the future holds for both of them.

First up, Olsen stopped by The Dan Patrick Show and admitted that the deal for him to call the Super Bowl actually isn’t 100% done.

On what advice he’d give to Brady, Olsen shared some insights that he learned while making the transition from player to a broadcaster.

“The biggest thing that I learned is, for so long, we all see the game a certain way,” said Olsen. “We sit in meetings and you’re accustomed to coaches and players that speak your language, understand what you mean. There’s a very fine balance calling the games between, you don’t want to dumb it down and take away from the complex nature that makes football so special and so interesting and why people tune in in the millions to watch it. But you also can’t talk on air like I would talk to my coach, or like I would talk to a current player or teammate who understands the language and terminology because you could lose a lot of people, right? So there’s two ends to that spectrum.

“Threading that needle is a very delicate balance and that was something I really enjoyed. I love pointing out the intricacies of the game, and here’s what we would call it and this is what the receiver is thinking in his mind and whatnot. But then also not going overboard, that everybody’s sitting at home, drinking a beer on a Sunday is lost. They have no idea what I’m talking about. I enjoy that balance of it. So that was probably the biggest lesson I learned. I’m sure Tom will be just fine and probably doesn’t need my advice.”

Olsen also appeared on the “Pardon My Take” podcast, this week and shared more insight into how he’s handling the situation, saying that if you’re going to lose out on an opportunity like this, he can take solace in knowing it’s to Tom Brady.

“If they would have hired someone – all along, we thought we were in the mix and we had good dialogue and obviously they weren’t going to tell us exactly what was going on behind the scenes,” Olsen said. “We had heard the same rumors everybody else did and we were trying to make sense of it all. When the news came, it was like you just said. If it was someone else, like if I got jumped by someone else, sure, I would’ve wanted to burn the city to the ground, right? I would have been pissed and whatever.

“But when you lose out on Tom Brady, it’s like this sucks, at least he doesn’t take the job now, maybe I can have my time in the sun and keep his seat warm until he gets there. But yeah, if you’re going to lose, at least lose to him. I can at least live with the only person in the world who beat me out was Tom Brady.