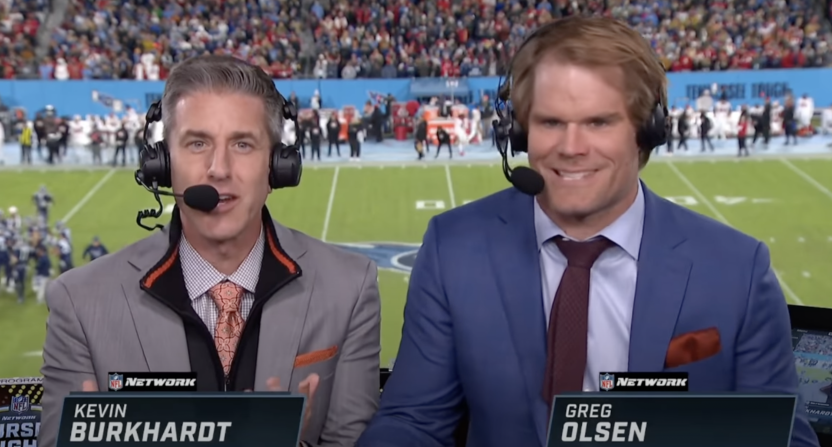 As expected, Greg Olsen will follow Kevin Burkhardt to the top booth this year. Unlike Burkhardt, though, Olsen’s stay won’t be permanent, as Fox’s megadeal with Tom Brady will see the current Tampa Bay quarterback slide into the role whenever he retires.

“We’re thrilled to have this team steward our industry leading and award-winning coverage as we embark on our 29th NFL season, highlighted by our 10th Super Bowl,” said FOX Sports President of Production/Operations and Executive Producer Brad Zager. “Last season, Kevin and Greg showed viewers their undeniable chemistry and ability to call football at an elite level. We can’t wait for fans to see what they’re going to bring to AMERICA’S GAME OF THE WEEK, the NFL Playoffs and Super Bowl LVII.”

Olsen has commented on the situation before, including last week:

Fox choosing this path is fairly understandable, from their perspective. Brady’s skills as an analyst remain to be seen, but if he’s good, then having one of the most accomplished athletes in the history of the sport in the booth will be worth the massive numbers they’re reportedly paying him. Burkhardt is the logical internal Joe Buck replacement on the NFL side for Fox. Olsen, meanwhile, is already there, and has a proven chemistry with Burkhardt, which avoids pairing Burkhardt with a new analyst this season.

This gives Fox the fewest possible moving parts, and helps assure a solid broadcast team for their Super Bowl coverage in 2023.

The person who seems to benefit least here: Greg Olsen. Yes, he gets to spend at least one season in the top booth, and he’ll be on the call for a Super Bowl. He might even get multiple years before Brady comes in, and who knows how the Brady experiment will go? No one would suggest Olsen isn’t still in an enviable position, relative to the rest of his peers, and nothing he’s said publicly indicates he’s in any way unhappy with the situation.

That said, from the outside: this kind of sucks! Again, Tom Brady is Tom Brady. Of course Fox would want him if they could get him into this role. But essentially using Olsen in an interim role is not a common practice. Especially for an analyst who has shown a lot of promise and ability already, and who can connect with a younger audience. Moving Olsen up for a year is nice, but it’s going to necessitate the eventual move back down.

There is some downside risk, too; if Olsen is excellent this year and does a memorable Super Bowl, and then Brady joins and struggles to adapt to the new environment, it’s going to be a bad look for Fox. And at that point, who knows if Olsen would stick around long-term at the network that didn’t give him the top job when they could have?

Only 37, there are many years ahead for Olsen if he wants to keep going. Fox could have locked him in alongside Burkhardt in a booth Fox likes well enough to give them a Super Bowl this year. Instead, they went with the interim plan while waiting for Brady.

There’s absolutely a chance that’s the right decision. Brady’s name-value is nearly unmatched. You can see why Fox is doing what they’re doing. But it’s not without risk.