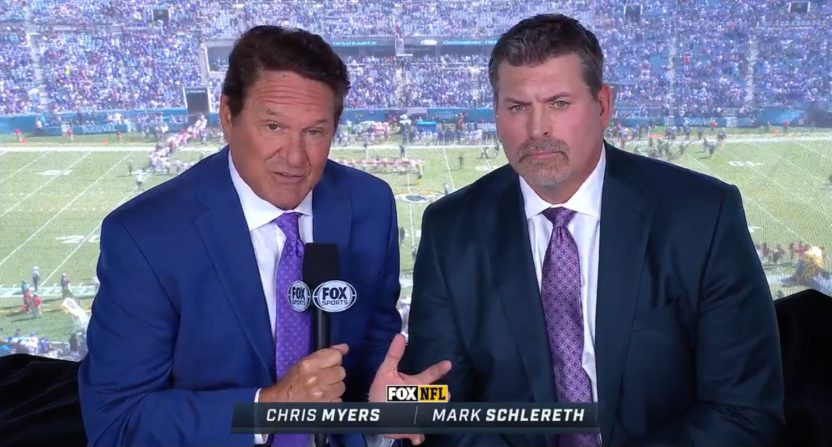 We’ve seen audio issues on game broadcasts quite a bit, and even on studio shows as well. What happened Sunday on Fox’s broadcast of the New York Giants–Jacksonville Jaguars game stood out for a couple of reasons, though.

For one, the loss of on-site booth audio took place after the game announcers’ preview from Chris Myers and Mark Schlereth (which went fine), but right at the start of the actual game broadcast. For another, the local Fox affiliates in Jacksonville and New York handled it differently. Jacksonville’s WFOX briefly cut to the Tampa Bay Buccaneers–Carolina Panthers game (which had fine audio) before coming back, while New York’s WNYW stuck with the Giants-Jags game with stadium audio only (and perhaps some muffled comments from the booth). Here’s how WFOX handled it, in two clips:

Fox's Giants-Jaguars broadcast lost booth audio at the start of the game. Here's how Jacksonville affiliate WFOX handled that, including a brief cut to Buccaneers-Panthers. pic.twitter.com/GgZtzLKBjB

Here’s the next clip on WFOX, with booth audio returning. pic.twitter.com/tLetW34JbI

And here’s the corresponding first clip from WNYW:

Here’s how NYC Fox affiliate WNYW handled this, sticking with Giants-Jags even without audio: pic.twitter.com/4SXiWxjetK

As mentioned above, this came after a perfectly normal preview from the announcers:

Here’s the announcer preview from just before the game, which had normal audio. pic.twitter.com/dIlsika3f4

The audio seemed to be largely fine after that, with perhaps a few short drops. Then, 13 minutes into the broadcast, Myers apologized for the early audio issues, and Schlereth had quite the line about how his unbroadcast audio was great: “It was my best work by far in all the years I’ve been doing this. You really missed out.”

Here’s how Chris Myers apologized for the audio issues, and how Mark Schlereth said “It was my best work by far in all the years I’ve been doing this. You really missed out.” pic.twitter.com/R0CKJsqppo

It’s certainly interesting to see an outage like this at the start of a broadcast, and to see how a couple of different affiliates handled it. As per JP Kirby’s 506sports.com maps, this broadcast was going to New York City, much of the surrounding area, Philadelphia, Texas, Oklahoma, New Mexico, Jacksonville, and Miami. So these audio issues affected quite a few viewers. But at least they didn’t last too long.