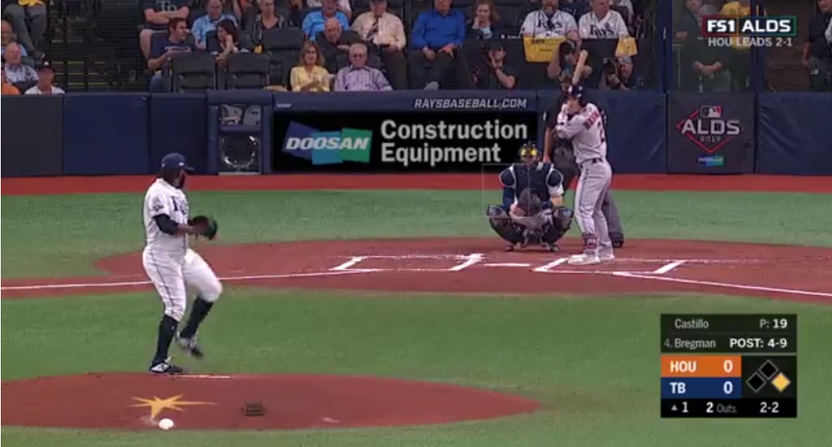 Game 4 of the ALDS between the Houston Astros and Tampa Bay Rays is in-progress at Tropicana Field, with the game televised on FS1.

The FS1 broadcast opened with an off-center camera angle — basically a view from shortstop — that drew a lot of complaints on Twitter from viewers. The angle was particularly annoying to baseball fans that are used to seeing the center field camera angle for Rays’ home games, and wanted a better look at the pitch movement and location from Houston’s Justin Verlander and Tampa Bay’s Diego Castillo (though Verlander’s pitches were doing a whole lot of nothing in this game, on short rest).

Me: Oh nice, I get to watch Verlander with Tampa Bay's great centered camera angle

WHAT IS THIS ATROCITY pic.twitter.com/H5WApmw90I

What the hell, FS1??? pic.twitter.com/40QDhvDQGQ

To co-sign what @jasoncollette noted, doing a broadcast at Tropicana and opting to use a low RCF view for pitches is like deciding to use an 8-track tape. The outstanding straight CF high camera angle is the best part of a Rays broadcast.

What is this camera angle lol

Is there a reason FS1 is using the off-center camera angle instead of the straightaway angle usually used for Rays games?

What kind of camera angle is that? pic.twitter.com/uS73uJQFom

This @FS1 angle is GARBAGE. Who’s decision was it to move the camera to left field?? #Astros #ALDS

Nice camera angle in the Houston Astros vs Tampa Bay Rays today. It’s like watching the game from the third base side. Nice job FS1.

btw. this camera is off centered and it’s ASS!! @FS1 @MLBONFOX @MLB

Hey @FS1 please give us the classic TB camera angle from behind the pitcher. Nobody wants this LCF offshit view. Thanks!

It’s unclear if this camera angle was related to an equipment/technical issue, or just what FS1 decided to go with. But after many viewer complaints, FS1 changed to the center field camera angle to start the bottom of the third.

That’s a very quick turnaround by FS1, and viewers were pleased with the change:

FS1 corrected the camera angle within 3 innings and FSMW didn’t despite a year’s worth of fans (ahem viewers) complaining.

Now, as straight-on is Tampa’s usual angle and it wasn’t offset last night, I’m guessing there was an equipment issue to start the game. So… https://t.co/u1qFnUY8ON

Fortunately that camera angle was only an opener, too.

They changed to the better camera angle in the MIDDLE OF THE GAME on @FS1. You guys deserve all the love. FSMW wouldn’t even change it mid-season