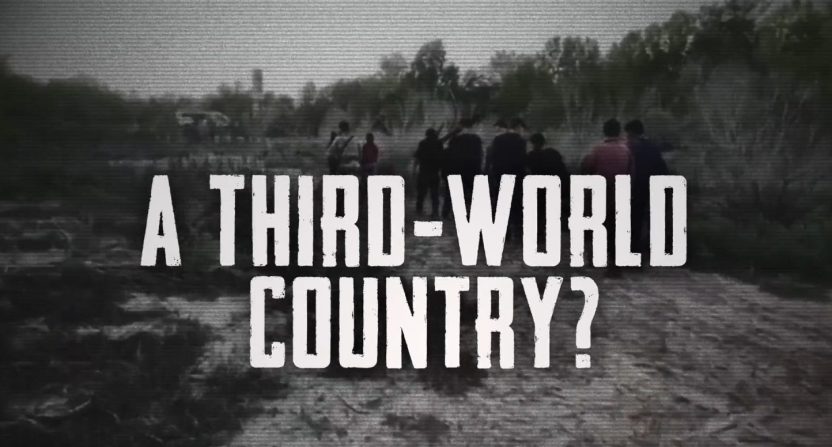 Many baseball fans were outraged after seeing a racist immigration ad repeatedly aired on FS1 during NLDS coverage.

According to a piece from Michael Hiltzik of The Los Angeles Times, the “Citizens for Sanity” commercial notably aired on FS1 during the mid-fourth inning break of the NLDS finale between the San Diego Padres and Los Angeles Dodgers Saturday night. That wasn’t its only airing, though; baseball fans on Twitter have commented on the ad as far back as Oct. 11, with it also airing during the Philadelphia Phillies and Atlanta Braves series on FS1.

The commercial in question depicts people of Latino descent crossing the border, labeling them “drug dealers” and “sex traffickers” in an attempt to blame President Biden and Democrats for illegal immigration.

“This giant flood of illegal immigration is draining your paychecks, wrecking your schools, ruining your hospitals, threatening your family,” the narrator states. “Mixed among the masses are drug dealers, sex traffickers and violent predators.”

The content of the ad is more along the lines of what you would expect to see on Fox News’ primetime cable news program hosted by Tucker Carlson. Although FS1 is under the same Fox Corp. umbrella, it was still stunning to see such a racist commercial aired on a sports network during the MLB Playoffs. MLB is not selling the ad space on Fox, but the league is certainly aware that it aired and has the ability to disavow its messaging. And if the league won’t address the ad, the players should. About one-third of MLB players are Latino, many being immigrants themselves.

The ad’s sponsor is “Citizens for Sanity.” According to the Times,  that’s an organization spearheaded by several former Trump aides, including former Trump senior advisor for policy and White House director of speechwriting Stephen Miller.  It’s unclear whether the ad was shown nationally or if it was market-specific. There’s an expectation that political ads will be aired during sporting events around election season, but this commercial is meant to spread hate more than it’s designed to elect a certain candidate, and many baseball fans were outraged by it.

Seriously, pretty disgraceful that @mlb, @FS1 and @TBSNetwork are airing racist garbage from dark-money funded Citizens for Sanity. It has no place in the postseason or anywhere on TV, for that matter

It’s super fucked up that @MLB and Hulu and FS1 are airing this insanely racist propaganda ad all over the NLDS playoffs https://t.co/yoX5f0rDq0

Kind of wild to see a very racist anti-immigrant ad run during the dodgers/padres series, when so many Latinos live in Southern California

FS1 just aired the most vile, racist, disgusting, right-wing Republican TV ad I’ve ever seen during the #Padres–#Dodgers game. Fuck the GOP and trump and all his enablers. #NLDS

Watching the Dodgers game and just saw a disgusting, openly racist and xenophobic ad by "Citizens for Sanity." Who are they affiliated with? Charlie Kirk. Bringing you a fascist America.

Only @FS1 would air a @FoxNews type of anti Latino, Racist “ad” during the @Dodgers @Padres. Many of the players are of Latino decent & most of the people watching live in SD are Latino. &☝?the people entering are entering LEGALLY so F*ck U “citizensforsanity” & do better @MLB ??‍♂️

Fox Sports repeatedly showing racist ads during the baseball games. Wow. Just evil and inappropriate during the #Dodgers#Padres game.#MLB should be ashamed.@FOXSports

Pretty sure Citizens For Sanity is a hate group. Definitely seems that way from the racist commercial I just watched. @FS1 @MLB

This incredibly racist ad just ran during the baseball game nationally on FS1. Tell me, who was president in February 2020? pic.twitter.com/GF03qSEs47

Viewers watching NLDS Game 4, Padres vs. Dodgers at Petco Park in San Diego, are upset an illegal immigration commercial by @citizens_sanity is being aired during the game. This political commercial was approved to air by Fox Corporation, in accordance with FCC regulations. pic.twitter.com/y76rvz78kr

Fox did not respond to Hiltzik’s request for comment on if this ad was reviewed by a standards department or if it will air again. FS1 will air several games of the NLCS between the Padres and the Phillies, beginning with Tuesday’s Game 1 (8:03 p.m. Eastern). We’ll see if this ad airs more times there.