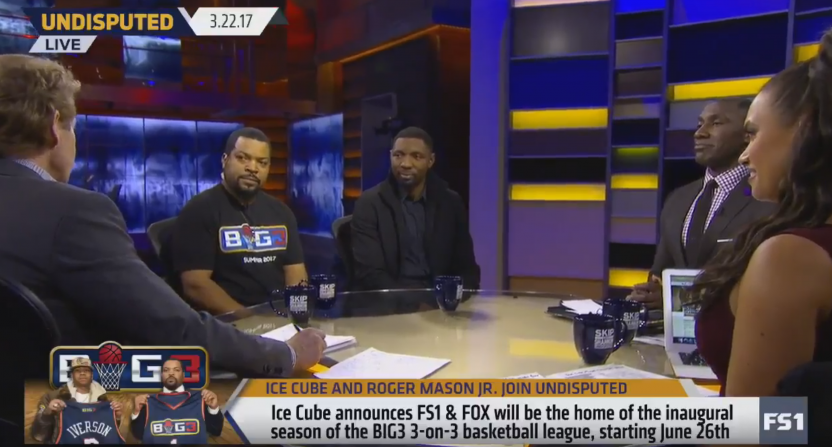 FS1’s current direction as a network is turning a lot of sports fans off. After trying for a couple years to build a real alternative to ESPN, FS1 hired First Take brainchild Jamie Horowitz and unleashed the MechaGodzilla version of Embrace Debate. In their quest to take on ESPN and topple them as the sports cable leader, FS1 gave up on their original vision and went with an approach that was “if you can’t beat ’em, join ’em.”

Do you know how much debate or sports talk programming FS1 will have today between Skip Bayless, Colin Cowherd, and Jason Whitlock between reruns and first airs? Try TWELVE AND A HALF HOURS. More than half of the day!

Twelve and a half hours of polarizing sports debate is no way to build a network. It never has and it never will be. What FS1 should be building its network on is sports. Ironic, I know.

That’s why while it might not be worth major headlines, the news that broke yesterday shows that Fox is still at least trying to expand their live sports rights portfolio. It was announced that the revolutionary new 3 on 3 basketball league that everyone is talking about, Ice Cube’s Big3, came to a rights agreement with FS1 and Fox.

The Big3 league will debut in primetime on FS1 on June 26th at 8 PM and the final will be played on the Fox broadcast network. In the meantime, FS1 will get some valuable live sports throughout the summer to mix in with their baseball coverage at a time when some of their other sports are on hiatus.

It’s a smart move by Fox for a number of reasons. There’s going to be some huge curiosity surrounding this project and the star power of Ice Cube, Allen Iverson, and a who’s who of former NBA stars being involved are going to draw some initial eyeballs. And even if it is a letdown, or the second coming of the XFL, at least FS1 will have gotten people to the network.

As FS1 was positioning itself as an ESPN alternative, this was the kind of gamble one would have thought the network would have been built for. An upstart 24/7 cable sports network has to take some chances, like ESPN focusing on the America’s Cup and Aussie Rules Football back in the day. And if it doesn’t work, it’s no big deal and it’s back to the drawing board. If it does, though, your network can gain a serious following. The likelihood of this happening is debatable, but if the Big3 league takes off or has a decent run of success, it can provide Fox with something much needed – hours of live sports coverage.

When FS1 launched they touted MMA, NASCAR, MLB, and college sports as some of the network’s pillars. And still to this day, some of the consistently highest rated programming on the network is their MMA and NASCAR coverage. Why? Because fans know to go to FS1 for it on a regular basis and because they’ve built relationships with those fanbases. In spite of all of the millions the network has spent on Bayless, Cowherd, and Whitlock, their programs are still regularly outrated by NASCAR Race Hub. What’s the better investment for Fox do you think?

This is what FS1 should have been doing the whole time – trying to win sports fans over to their network with unique sports rights that you can’t find anywhere else. You’re going to reach more people in more different ways by offering a wider diversity of products. It’s just common sense.

What’s more, the more live sports Fox can offer, the quicker they can build not only FS1 but FS2 as well. Right now there’s still a large chunk of fans that don’t even get FS2 in HD *raises hand* let alone goes to the network as any kind of destination. Fox should go all in and load up on as much rights as they can get because that’s where the audience and potential growth is really going to come.

Any network built on twelve and a half hours of debate is going to have a certain ceiling that they will never be able to surpass. It may not be the splashiest way to go about things, but at the end of the day when all the talk is over it’s sports that need to be the foundation. There’s a very narrow sect of sports fans that want to turn into tens of hours of non-stop debate. But if you’re offering Ice Cube’s 3 on 3 basketball league starring Allen Iverson on the same network that you are NASCAR and MMA and the Bundesliga then you’ve got a decent chance of attracting a few new fans along the way. And that’s what it’s all about, isn’t it?