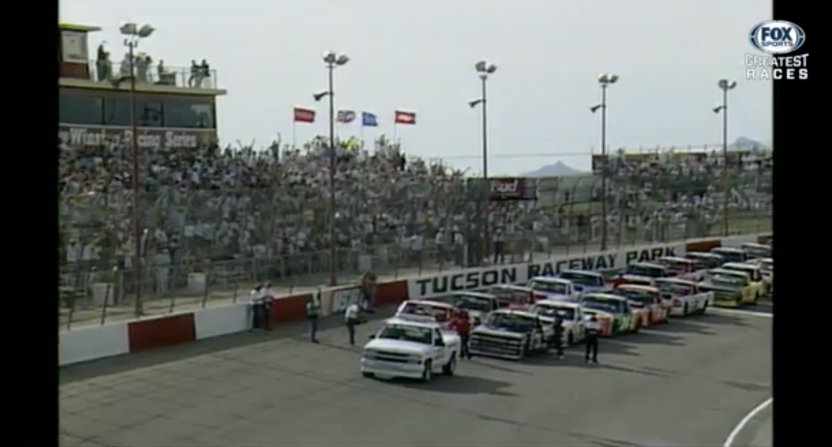 In broadcasting, technical difficulties happen. That’s especially true when you’re live. At least when issues arise while broadcasting live, there’s an understanding that things happen and everyone is doing their best to fix it as soon as possible.

However, when this kind of thing happens on a 25-year-old broadcast, the result can be much worse.

That’s what happened with FS1 on Saturday morning as they were airing the 1995 Racing Champions 200 NASCAR Truck race. As the trucks were about to begin the second half of the race, the audio and video went out of sync. The audio kept going and stayed that way throughout but the video reset to the beginning of the broadcast, which remained out of sync for the final hour of the two-hour showing.

FS1 accidentally reset the video to start at the beginning and screwed up the audio/video for half the broadcast. pic.twitter.com/QY5ew64AcW

The original broadcast can be found on YouTube and there were no audio/video issues, so this appears to have been an FS1 problem. It also would’ve been strange for FS1 to choose a race broadcast that had known technical difficulties for half the race, so whatever happened had to have been on FS1’s end.

Those watching noticed and mentioned the discrepancy on social media but it was to no avail. The issue was never fixed and, while the audio ended perfectly, the video cut in the middle of a driver interview during the halfway break.

@FS1 please fix the broadcast. The audio sounds exciting but the video is from earlier. What the heck guys!!!!! Ron Hornaday just took the lead and your interviewing the pole sitter on the video

@FS1 somebody is asleep at the switch. U r messing up the truck race

What is going on @FS1 This is crazy!

There's some big time technical issues with this Racing Champions 200 broadcast on @FS1. The audio is correct (I guess), but the pictures are way behind. This is a 2 hour slot and the race is on Lap 48.

We're watching "NASCAR'S Greatest Races" on @NASCARONFOX FS1. It's a truck race. The audio is correct (around lap 160) but the video is a replay of earlier in the race (around lap 54). Who's minding the broadcast? #whoops

Watching this old truck race on FS1 and it's all messed up lol. The audio is off. I just seen the same wreck twice. They're under caution but the audio is still under green.

@FS1 What the hell are you doing with that Truck race? Video from one race and audio from another? Got me tripping.

Lol, super glad I found the 1995 Truck Series race at Tucson on @FS1 right about the time the video restarted but the audio stayed the same.

The race just ended on audio, but the video is still the first half of the race.

This same race will be shown Saturday night at 11:30 ET on FS2. It’ll be interesting to see if the issue is fixed. Having problems on a 25-year-old broadcast is bad enough but broadcasting the same mistake 12 hours later would be a whole other level of bad.