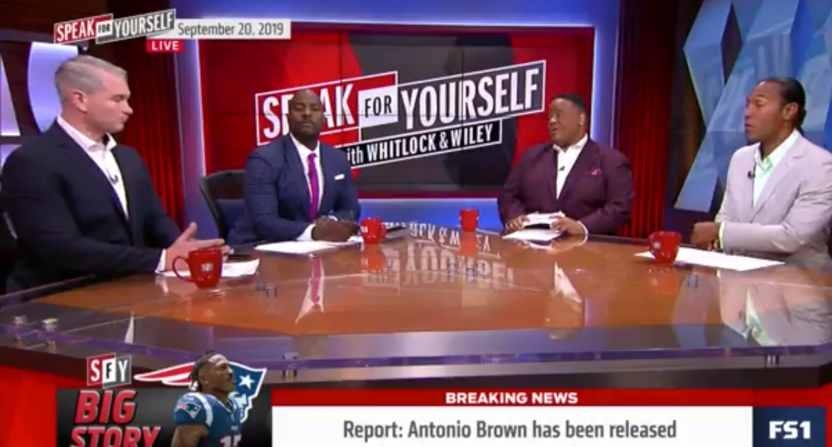 Over the years, we’ve criticized FS1 a lot for their de-emphasis of news, from their website‘s ill–fated pivot to video to their retooling and eventual cancellation of news and highlight show Fox Sports Live. Meanwhile, while ESPN has made their own problematic moves on the news front, the criticism for them has largely been about decisions on individual news stories (including late acknowledgement of outside stories, softball interviews with problematic figures, on-air bashing of ESPN reporting), not about their overall programming commitment to news; if anything, they’ve emphasized the SportsCenter franchise (which isn’t all news, but includes it) even more recently. But with the breaking news of Antonio Brown’s release by the Patriots Friday, while both networks initially addressed it at about the same point (albeit only in a ticker update from ESPN), FS1 actually was able to cover the news more quickly and more thoroughly on air thanks to their main network’s studio programming being live instead of pre-taped.

The timeline here saw Brown tweet what appeared to be a farewell to the Patriots at 4:09 p.m. Eastern Friday, and it was quickly confirmed by several reporters (including NFL Network’s Ian Rapoport at 4:12 and ESPN’s Adam Schefter at 4:13) that the team had in fact released him. The team themselves tweeted out a statement at 4:22. Before that, both FS1 and ESPN addressed the issue around 4:15, but that came in two different forms. On FS1’s Speak For Yourself, which is broadcast live, Jason Whitlock brought it up on-air during a group discussion (presumably after he was informed by a producer about what was going on):

The group then spent seven minutes discussing that before going to a commercial break, and Whitlock and co-host Marcellus Wiley then discussed it further for the remaining five minutes of their show. Meanwhile, ESPN was airing High Noon at that time, but it was pre-taped; the show began with a discussion of Brown and of developments earlier in the day (including the threatening texts and Patriots’ coach Bill Belichick ending a press conference early after repeated questions about Brown), but the actual news of Brown being released was limited to a ticker update around 4:15 Eastern, while co-hosts Pablo Torre and Bomani Jones were discussing Russell Westbrook:

ESPN did get to an on-air SportsCenter update with Nabil Karim around 4:30 Eastern before going to Highly Questionable:

However, Highly Questionable was also pre-taped, and so the only Brown discussion during it came on the ticker:

Update: It’s notable that ESPN did cover this more quickly on-screen over on ESPNEWS (and ESPN Radio), where Adam Schefter called into The Will Cain Show around 4:18 p.m. Eastern:

In terms of the main network, though, ESPN didn’t get to extensive coverage of this until 5 p.m. Eastern. Meanwhile, FS1’s Lock It In (which began at 4:30 p.m. Eastern) was live, and started by addressing the Brown situation (from their usual gambling-focused perspective):

At 5 p.m. Eastern, the main ESPN network got to more standard coverage of the Brown situation, pre-empting Around The Horn (which is also pre-taped) for a half hour of 6 p.m. SportsCenter hosts Sage Steele and Kevin Negandhi covering the issue and talking to various figures (including ESPN Patriots’ reporter Mike Reiss, ESPN NFL reporter Adam Schefter, and ESPN NFL analyst Louis Riddick) about it.

And at 5:30 p.m. Eastern, ESPN went to Pardon The Interruption, and that started with fill-in hosts Frank Isola and Israel Gutierrez talking about Brown:

And at 6 p.m. Eastern, ESPN rolled back into SportsCenter and continued a full-court press on Brown coverage. Meanwhile, at 5:30 p.m. Eastern, FS1 rolled into a pre-taped episode of Fair Game with Kristine Leahy (with Leahy interviewing Damien Dante Wayans), and at 6 p.m. Eastern, they went to a pre-taped NFL Turning Point episode on Super Bowl LI. So ESPN was definitely ahead in the ongoing Brown coverage from 5 p.m. Eastern on, and they provided a more comprehensive picture of the situation than FS1 did, as that network doesn’t have a news-focused show at this point.

But it’s interesting that FS1 was able to address this more quickly on-air and to integrate it into their regular programming, and that shows an issue with ESPN pre-taping studio shows. Most of the time, it’s not a big deal, but when big breaking news happens, it means that some of ESPN’s planned programming is quickly outdated. They handled that pretty well Friday, first getting the news up on the ticker ASAP, then addressing it with the on-air update between taped shows (which was only about 15 minutes after the news broke), and then pre-empting Around The Horn for the SportsCenter special on this, and it is impressive how fast they covered this on ESPNEWS/Radio. Still it’s still notable to see Fox able to pivot their studio programming faster thanks to shooting their shows live. There are still big gaps in how FS1 handles news, and those were evident here as well, but their quick reaction and quick incorporation of the Brown news into their studio content was impressive.