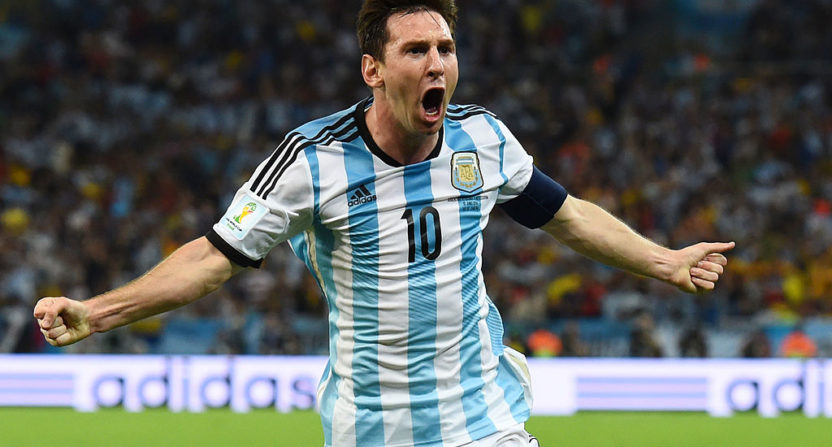 When Fox announced earlier this year that most of its World Cup broadcasts would be called not by broadcasters on-site in Russia but rather by Los Angeles-based announcers following along remotely via monitors, many soccer fans were disappointed. After ESPN went all-out in its coverage of previous World Cups, Fox seemed to be cutting corners in its first chance to broadcast the men’s tournament.

Well, Fox’s World Cup executive producer David Neal is here to say the network’s decision to keep its commentators home is no big deal. In fact, Neal told The Athletic’s Richard Deitsch, the whole thing is a “non-story.” Via The Athletic:

“First of all, it is standard in the sport” Neal countered. “Over half of the matches in America on a global basis in any given year are called off-tube (from monitors not at the stadium). There are rights-holders from Europe who are not sending any talent to Russia. To me, it is a non-story. In soccer, it is standard procedure to do matches off-tube. The number of traveling teams versus the number left here in LA is kind of irrelevant when we are doing half of the games with talent in-stadium.”

It feels like cost-cutting above all. I’d argue the World Cup is a unique sporting vehicle where fans have an expectation of broadcasters being on site thanks to the precedent set by ESPN, which had five pairings in-stadium for 2014. “Fans will get American voices, great, diverse multicultural voices, doing play-by-play and color commentary,” Neal said. “Every video and picture that we are covering for the month of the tournament is emanating from Russia. We are not doing shows from L.A; we are anchoring our shows in the heart of Red Square. Viewers around the world on a regular basis consume soccer games that are not called with talent in the stadium. I don’t see that as a big deal.”

Neal’s assertion that remote broadcasters are standard in soccer is correct in many situations, but that doesn’t change the fact that Fox is falling short of recent precedent, especially given that this is one of the premiere sporting events on the calendar and not a series of run of the mill matches. ESPN typically had a majority of its commentators on-site at World Cup matches when it held rights to the World Cup, and 2018 rightsholder Telemundo Deportes will have all its broadcast teams in Russia and more than half on-site during the coming tournament. Fox, on the other hand, will send only two teams to Russia (its lead duo of John Strong and Stu Holden, along with JP Dellacamera and Tony Meola), while the network’s other four pairings will be back in Los Angeles. In others words, Fox could do more if it wanted to.

Ultimately, remote broadcasts aren’t the end of the world. The average fan probably won’t even notice when Fox’s commentators are and aren’t on-site. But there’s no question that being back in Los Angeles will cause announcers to miss out on subtleties that their colleagues in Russia will spot, which will make for a lesser broadcast on Fox. And sacrificing quality to save a little cash sure sounds like a story to us.