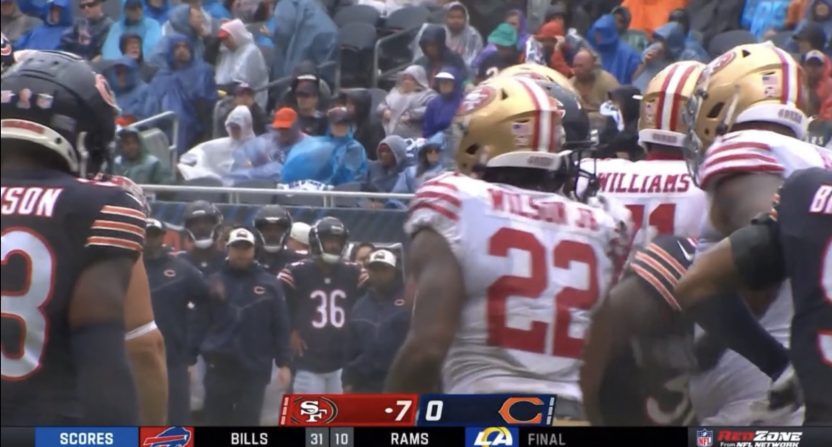 Last year, NFL RedZone viewers were treated to the annoyance of not being able to view the full scorebug on Fox broadcasts, presumably in an attempt to discourage people from watching games there instead of on their stations. It looks like they’re back at it again in 2022.

It looks like Fox has again scooted its scorebug lower on the screen and those watching on redzone are now unable to see stats, quarter, time on clock, and down and distance because their ticker blocks that info. We wrote about this happening last year.https://t.co/DpPrB4brsj

Just as with last season, viewers watching NFL RedZone had a hard time noting the overall clock, play clock, and down and distance information on the Fox bug. Interestingly, some noted that the information was visible at one point but then Fox dropped the bug just enough that it got cut off.

Niners-Bears had the full scorebug showing on NFL RedZone, but seconds later, Fox lowers it to cut off the clock and down-distance. pic.twitter.com/GmgglNjPnE

NFL Redzone had this problem all last year with the fox games and I cannot believe they didn’t fix it yet. Please please please just zoom out on the game like an inch so we can see the time and down and distance info in these games. pic.twitter.com/nJs6fNhbX7

As with last year, RedZone has implemented a scorebug of its own to ensure that viewers can get all the information they need, though it appears to come and go depending on the game and network that is broadcasting.

RedZone had been removing their ticker for Fox games then putting it back on for CBS games, but now they have an identifying bug they're using for Fox games with the lower scorebug. pic.twitter.com/ZMRMH9Ao5D

The big question is how often Fox will end up doing this. Is it a tactic meant to protect certain games or is this just going to become a standard issue for their games moving forward? And might we see CBS follow suit at some point? And will the NFL try to intercede at some point to smooth things over?

Whatever may happen in the future, the annoyance created by the bug placement is certainly impacting RedZone viewers, many of whom seem to be blaming RedZone for the issue. Whether or not that compels them to change the channel to Fox, that’s another story.

Just get rid of the bottom line on Redzone. You can't see the Fox scorebug!