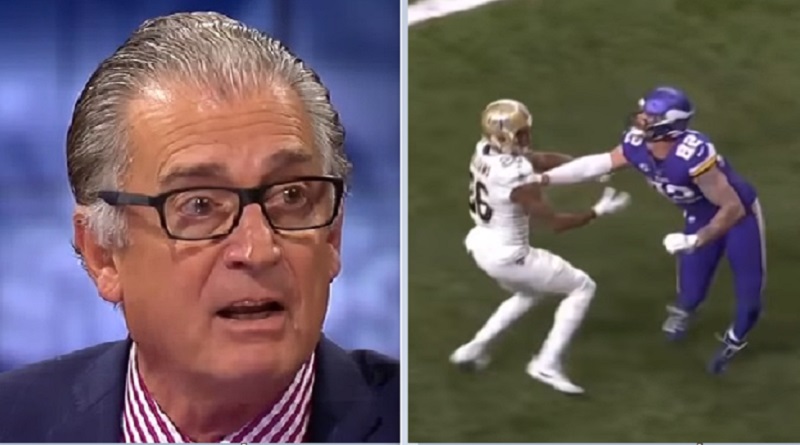 Fox Sports hiring Mike Pereira as a rules analyst 10 years ago to explain key calls and which calls should be made has been a beneficial addition to the network’s NFL and college football coverage.

Officiating is discussed as never before and viewers arguably have a better understanding of football rules (and how referees look at such plays) than ever before. It’s changed game telecasts to the point where other sports are wondering how and if they should implement rules analysts for their broadcasts.

But what happens when the rules analyst doesn’t provide analysis for a ruling (or lack of one) on the field?

Sunday’s NFC Wild Card playoff game between the Minnesota Vikings and New Orleans Saints ended on a controversial touchdown catch by the Vikings’ Kyle Rudolph. Rudolph appeared to push off Saints cornerback P.J. Williams to create separation and prevent Williams from making a play on the ball himself. It certainly appeared to be offensive pass interference. Yet the referees didn’t make that call, nor was the play reviewed to see if pass interference should’ve been called on Rudolph.

That seems like an ideal instance for Fox’s rules analysts to chime in. Did Rudolph commit offensive pass interference? Should the referees have made that call? And since it wasn’t made, should the play have been reviewed to see if pass interference did indeed occur?

Color analyst Troy Aikman even ceded to Pereira after the play because he’s supposed to be the rules expert. But rather than provide any analysis or make a definitive call, Pereira essentially punted. Here’s a clip:

If you can’t watch or listen to the video, here’s what was said on the telecast:

Pereira: Thanks, I’ll give it back to you, Troy. [Laughter]

That is essentially word salad from Pereira, trying to fill airtime by stating the obvious while the officials debate whether or not pass interference is worth reviewing. But he doesn’t say what he thinks. Did Rudolph commit offensive pass interference? Pereira says “he does get separation and he does extend the arm,” which seems to argue that the play should be reviewed. Yet he doesn’t say anything definitively.

Isn’t that exactly what Pereira is supposed to do in his role as a rules analyst on the Fox telecast?

The subtext to the entire circumstance is how pass interference was reviewed during the 2019 NFL season. Following what happened to the Saints in last year’s NFC Championship game, when the Rams’ Nickell Robey-Coleman clearly ran into New Orleans receiver Tommylee Lewis before he could attempt a catch, the NFL changed its rules and allowed pass interference to be reviewed.

(By the way, when Buck asked Pereira if he thought a pass interference penalty had been committed in that circumstance, he answered definitively: “Yeah, I really do.” Pereira also explained that the contact happened early enough in the play and high enough on Lewis that it was an obvious call. )

Yet pass interference reviews rarely resulted in an overturned call during the regular season. Only 21 percent (24-of-101) of reviews led to a reversal. Al Riveron, the NFL’s senior VP of officiating, was frequently inconsistent in ruling on such calls. With such a poor success rate, NFL coaches frequently opted not to ask for a review and risk losing a timeout — even when replay appeared to show that pass interference had been committed, but not called on the field. It’s a broken system that will almost certainly be changed or eliminated next season.

The NFL's No. 1 message to its fans last offseason was, "Don't worry, now we'll fix any missed pass interference calls with replay." So of course we're sitting here talking about the Saints losing on an uncalled pass interference that they didn't review. https://t.co/VGAG3hkoli

So that’s likely why Aikman and Pereira shared a laugh after Rudolph’s game-ending touchdown and the possibility of pass interference was raised. Both analysts knew that the play wouldn’t be overturned with an offensive pass interference call because such a ruling never occurred during the regular season.

Maybe Aikman quickly passed the mic to Pereira in a “DEFEND YER BUOYZ!” challenge. How are you going to explain this one, Mike? But Pereira hasn’t had a problem criticizing referees and saying they missed a call or got it wrong, which is why it was surprising when he punted here. Presumably, he wasn’t critical this time around because he knew that the call wasn’t going to be overturned on review and decided that it wasn’t a discussion worth having.

3. The receiver places his hand in the chest of the defender and pushes off to create clear separation. The definitive tell is the upper body of the defender jerks backward.

The is a clear and obvious foul for OPI.
The passionate love for their team by Vikings fans is noted.

Yet in the moment, it felt like Pereira dropping the hot potato and shrugging his shoulders. Pereira being coy looks even worse when other commentators, such as Tony Dungy and Rodney Harrison during halftime of NBC’s Sunday Night Football, definitively stated — albeit hours later — that offensive pass interference should’ve been called on Kyle Rudolph.

You could argue that Mike Pereira has one job. And when his analysis was really necessary for probably the biggest no-call of the 2019-20 NFL season, he didn’t do it. (Nor did he address the call later on Twitter.) Pereira is usually better than that, which is why this is so disappointing.