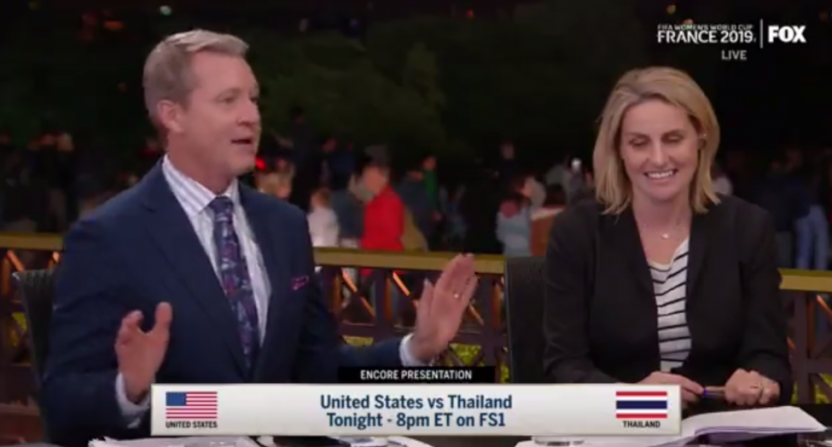 The U.S. women’s national team’s Women’s World Cup got off to an interesting start Tuesday with a 13-0 victory over Thailand. That led to some Twitter criticisms of the U.S. for continuing to go for goal even after the game was decided, something that doesn’t particularly consider that goal differential in all group games is the first tiebreaker in this tournament if two teams are level on points after the group stage. And, oddly enough, that argument wasn’t limited just to Twitter, but was made on Fox’s own broadcast by host Rob Stone, who suggested that the U.S. should instead “pull back, knock it around.” The rest of the panel disagreed with Stone, but no one brought up the goal differential tiebreaker. Here are the clips in question, starting with analyst Alexi Lalas preemptively defending the U.S. from criticism:

Lalas says “And anybody out there who thinks the U.S. team should have taken their foot off the gas, the U.S. team is not here to be anybody’s friend, the U.S. team is here to win a World Cup, the U.S. team, each and every time the whistle blows, is going to score as many goals as possible. It’s not their problem if they’re playing against a poorer team. And you saw the celebration after every single goal, that’s the bigger picture of what they’re here to do.” Stone then responds by criticizing the U.S. team for continuing to score and saying they should “pull back, knock it around”:

“13-0! I mean, I understand your point, but this one was done. This got humiliating at some point and just became an exercise in target practice for the United States. I understand all you can do is play against the team that’s lined up in front of you.” Lalas then chimes in “What do you want them to do, Rob?” and Stone responds “You know what I want them to do, pull it back, knock it around.”

Panelists Kelly Smith, Heather O’Reilly, Ariane Hingst and Lalas all disagree with that, but Stone goes on with “The throat was stepped on. Thailand was broken, they absolutely were broken.” O’Reilly chimes in with “This was the best way to show respect,” Stone says “By piling on and making it 13-0?” and O’Reilly responds “These countries need to improve.” She then goes into more detail, and Stone still disagrees, saying “I think Thailand needed to improve just down 3-0,” but then wraps up the broadcast:

O’Reilly says “Thailand will improve” and Stone says “I think Thailand knew they needed to improve just down 3-0 at the half. I get it, though. 13-0. We talked about the French making a statement on Opening Day, was this a bigger statement than what the French (who beat China 2-1) did on Day 1?” Smith says “In terms of finishing, definitely,” and Stone says “Absolutely, everything was finding net for the U.S., particularly in that second half. 13-0, what an opening night for the United States. No mercy. And most of it coming from Alex Morgan, she had five.”

It seems somewhat ridiculous not only that Stone made this “pull it back, knock it around” argument on the official U.S. broadcaster of the Women’s World Cup, but also that no one brought up goal differential as a disagreement with him. The goal differential scenario here is very real; ninth-ranked Sweden is in the U.S. group and beat Chile 2-0 earlier in the day, and given that the top-ranked U.S. faces Sweden on Group F’s final matchday, whoever posts better combined goal differentials against Thailand (ranked 34th) and Chile (ranked 39th) knows that they’ll only need a tie in that final match to win the group.

This U.S. result makes it seem quite likely the American team will have that edge, unless Sweden’s able to come up with an even better result against Thailand or unless the USWNT stumbles against Chile. So the extra goals here are very much meaningful at this moment, and it would have been nice if someone on the Fox broadcast would have noted that. Instead, we got Rob Stone arguing that a 13-0 win offends his sensibilities and that the U.S. should have “pulled back and knocked it around,” even if that wound up costing them later in the tournament.