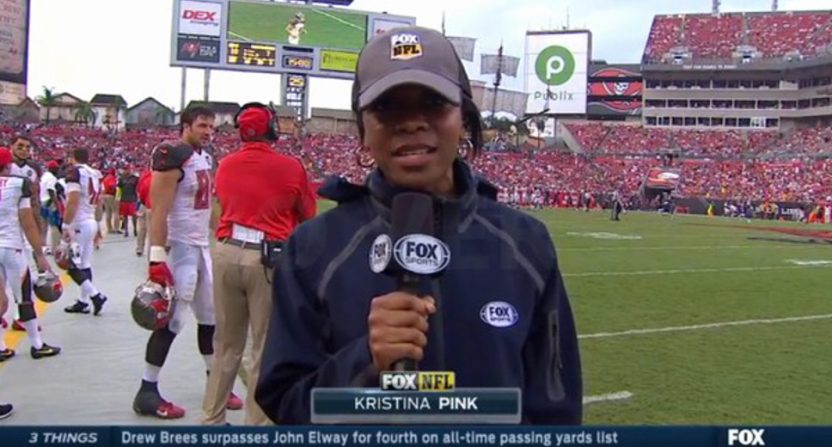 It sounds like Fox’s Thursday Night Football coverage may be boldly going where no network has regularly gone before, bringing in not one, but two sideline reporters. Andrew Marchand of The New York Post writes that Fox is expected to promote sideline reporter Kristina Pink, who worked with their No. 3 team (Kenny Albert and Ronde Barber) on Sundays last year, to Thursday night coverage, but that she’ll likely be working alongside Erin Andrews, the usual sideline reporter for the No. 1 team of Joe Buck and Troy Aikman:

The network is promoting sideline reporter Kristina Pink, sources told The Post, to join Joe Buck and Troy Aikman as it attempts to make Thursday Night an even bigger event.

Erin Andrews, who has worked with Buck and Aikman on Fox’s No. 1 team, is expected to join Pink on the sidelines, but the final details of both Pink’s and Andrews’ deals are still being ironed out. Pink is likely only going to work with the top crew on Thursdays.

In addition to her NFL work, Pink has also worked as a courtside reporter for L.A. Clippers’ broadcasts on Fox Sports Prime Ticket. As per her Fox Sports bio, she joined the network in 2012, and has served as a sideline reporter for both NFL and college football coverage since then. It’s interesting that they’ll be adding her to this broadcast, though, as most networks only go to the two-sideline-reporter strategy for the playoffs or the Super Bowl, as Michael McCarthy of The Sporting News noted:

That speaks to how much Fox is trying to make Thursday Night Football stand out, and how important it is for the future of the “new Fox.” Will an extra sideline reporter really make that much of a difference? Who knows. But it will certainly be different, and maybe it will help contribute to the idea that TNF is now a marquee property instead of an also-ran. (Honestly, the schedule will probably make more of a difference there, and it’s notable that Fox’s lobbying and money thrown at this appears to have at least partially paid off.) At any rate, Fox certainly seems willing to invest heavily in this, and this is the latest sign of it.