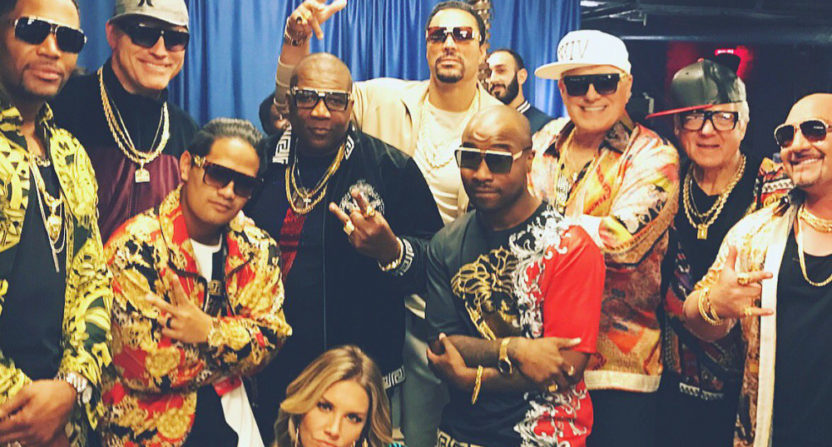 Monday saw Fox make its upfronts presentations to advertisers about their fall schedule, and there was a lot of focus on sports. That’s not surprising, considering Fox’s year-over-year viewership changes with and without sports was the largest of the networks (up 2 per cent in viewers and flat in the 18-49 demographic with sports, but down 19/18 per cent otherwise), but it did lead to some very odd moments. Such as this cringeworthy rap track about their NFL schedule:

Literally no idea what's happening at #FoxUpfronts. I'm fine with it pic.twitter.com/EO3n40bdge

Some of the lyrics displayed there: “Cowboys and Packers, New York’s Big Blue, we gonna own every single weekend. America’s Game of the Week, the country’s #1 show, and here’s the thing that’s not fake news, it’s been eight years in a row.” Yeesh. And check out the outfits:

Some of the reviews were…not good.

I can't adequately describe how painfully unfunny it is to see Jimmy Johnson attempting hip-hop. Does it make anyone buy ads? #FOXUpfronts

This Super Bowl rap is a strong suggestion that Fox is about to go out of business. This is an odd way to announce it. #Upfronts2017

Getting whiplash between @joemarchese trying to transform TV, and Terry Bradshaw trying to rap. #FOXUpfronts

There was plenty of time devoted to their sports lineup:

In some curious combinations:

And plenty of criticism for some of the decisions made, especially by Joe Buck:

Joe Buck is shooting T-shirts into the audience: "Where's Rupert? That's the only person I don't want to hit." #Upfronts2017

Joe Buck is even worse at an #upfront2017 than he is at calling games. Painful. #Fox

Oh, and there was an ex-wife joke: “Fox Sports’ Joe Buck, pitching its lineup of games, said Americans spend $300B more in fall months than other times of year, adding,  “in part we can thank my ex-wife for that.””

It’s not surprising that Fox tried to emphasize sports so much, given how key it is to their schedule. In fact, Ad Age’s Anthony Crupi wrote last month about Fox’s pre-upfronts pitches to top media buyers focusing on sports and how that was likely to continue into the actual upfronts; that definitely happened. But the question is if Terry Bradshaw and Jimmy Johnson rapping and Joe Buck telling jokes is really going to get advertisers to pony up money. NFL games are going to get massive audiences anyway, especially when they’re the Packers and Cowboys-favoring slate Fox has, and advertisers are probably going to be into them regardless of if they see Fox personalities rapping about it. And given the issues with the ratings for the rest of Fox’s programming, live sports is where a lot of that money’s going to go. So it’s interesting that Fox is trying to sell something that would probably sell otherwise, rather than using that time for shows that might actually benefit from some further promotion. As Fienberg noted, the rest of their lineup could use some help:

From advertising blather to Fox Sports or, rather, “Fox Sports: Without Us, The CW Is Getting Dangerously Close.” #UpFronts2017

There was some actual news here, and it came from the ad side. Alongside NBC, Fox is going cross-platform with its ad guarantees, meaning that they’ll guarantee viewers on streaming and digital as well as conventional TV. That fits with the greater emphasis on tracking and monetizing non-traditional viewing, which we’ve seen pay off for ESPN (with Disney CEO Bob Iger saying including out-of-home viewing and WatchESPN boosted ESPN’s audience by 10 per cent last quarter). Fox is also going to single-advertiser sponsorships for on-demand programming, something we’ve seen pay off for Turner and other networks with sports; the Fox change seems to be mostly about other programming right now, but if they find success there, we may see more single-advertiser breaks on Fox’s sports coverage too. And keep in mind that Fox recently teamed up with Turner and Viacom in another effort to synchronize TV and digital advertising sales.

The biggest question for Fox on the sports front may be about FS1. They’re ramping up the debate there further with the new First Things First Nick Wright and Cris Carter morning show (starting this September), and they’ve bragging about Undisputed beating SportsCenter (on ESPN2) and how its ratings have improved year-over-year, but they’re still not great (although they’re much better than say, Speak For Yourself). FS1 can post excellent ratings when it has quality live sports, as it did last fall when they bragged about being “America’s #1 Sports Network” (based off a single week of ratings that included six playoff baseball games), but it’s definitely still finding its feet otherwise. That may be what they really need to sell advertisers on, and it’s unclear if all the rap numbers in the world will help there.