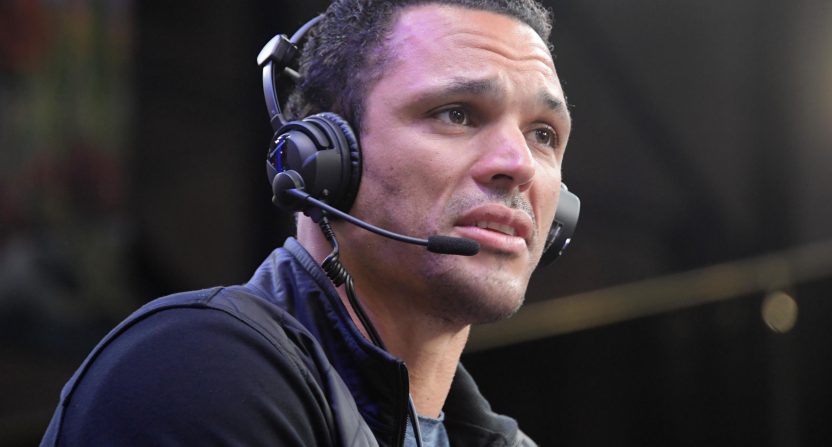 For what seems like the first time in a long time, the NFL’s much debated Thursday Night football package will find some stability this coming season. Fox Sports will enter its second season as the main network television home for TNF, but there will be a couple of minor tweaks to the television presentation.

Fox will still bring many of their A-grade personalities from Sunday coverage, but will add another face to their pregame studio coverage – Tony Gonzalez. The Hall of Fame tight end will join TNF pregame coverage alongside Michael Strahan, and a rotation of Howie Long and Terry Bradshaw.

After Tony Gonzalez goes into the Hall of Fame this weekend, he is receiving a TV promotion, The Post has learned.

Gonzalez is being added to Fox’s Thursday NFL pregame show, according to sources. Fox executives are high on the 43-year-old Gonzalez, not only for what he brings on the air, but the level of interest and ideas he shows up to work with each week.

Fox took Gonzalez from CBS two years ago, where he began his post-playing TV career on “NFL Today.”

While Michael Strahan will be back as the host on Thursdays on Fox, Terry Bradshaw and Howie Long will split the 11 weeks during the year, according to sources.

The Bradshaw/Long split comes on the heels of the pair working both Thursday and Sundays all season in 2018, but it might make sense to give the longtime Fox personalities a bit of a break throughout the season. Working both dates for the duration of the campaign can be quite the grind.

In one other change, the Post also reports former Patriots DT Vince Wilfork won’t return to the network’s coverage with his segments.

The Post reasons that Gonzalez’s promotion might be with an eye towards him being one of the faces of Fox’s long-term NFL studio coverage, with Bradshaw and Jimmy Johnson both in their seventies. While that may make sense, it also may not happen anytime soon. Keep in mind that Lee Corso is still featured ESPN’s College GameDay at age 83. Johnson and Bradshaw could theoretically be a part of Fox’s coverage well into the next decade.

What Gonzalez’s larger role at Fox may mean is the network sees it desperately needs some more contemporary analysis from elite players who have actually played with and against some of the top players still playing the game. Networks fall behind when analysis gets stale from the same voices that have been out of the game for generations and haven’t kept up with the latest trends like those who are fresh off their playing days. No matter the sport or the network or the analysis, coverage always benefits from a fresh, relevant, contemporary voice.

It may be hard to believe, but even Strahan retired more than a decade ago from the Giants. Fox benefits from Gonzalez’s ability to relate the current game to the viewer at home, and it wouldn’t be a surprise to see his role continue to grow from here because of it.