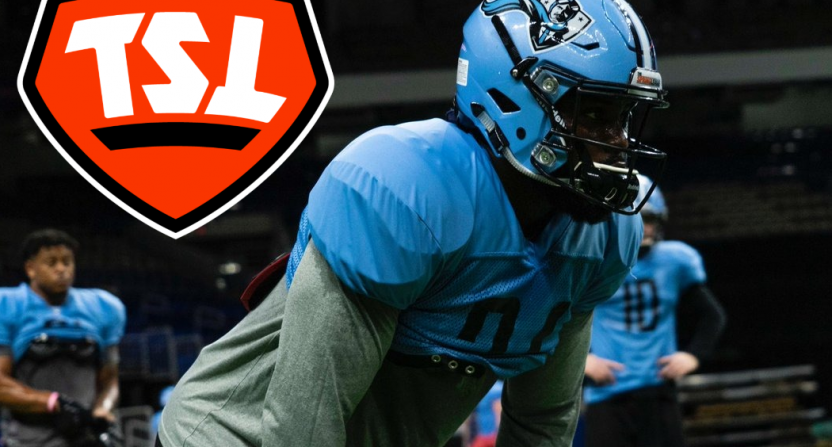 The Spring League is an independent developmental football venture that’s set to kick off its fifth season tonight with a doubleheader on Fox Sports 1.

With all games set to air across network FOX, FS1, and FS2, Fox Sports today revealed the broadcasting roster, which (appropriately for what is essentially a showcase for former college players hoping to make the NFL) draws from both NFL and college coverage teams.

The 2021 TSL season begins with Faust and Palmer on the call for a doubleheader Thursday, May 6, on FS1 when the Alphas take on the Aviators at 7:00 PM ET, followed by the Conquerors vs. the Linemen at 10:00 PM ET.

The Spring League isn’t the XFL or the AAF, two attempted spring professional leagues that folded for a variety of reasons (mostly Covid for the former, mostly gross incompetence for the latter), though the XFL is planning a return. TSL players aren’t paid; in fact, in some cases, they pay the league for the chance to play. Players who have been in the NFL or in an NFL training camp within the last three years play for free, but others pay a fee of $2,000. Meals and housing (in the league’s hub cities of Houston and Indianapolis) are provided, but that’s it.

Steve Keating wrote this week for Reuters about the league’s unique setup:

Because the TSL has no player payroll, no travel costs and reduced overhead by playing out of centralized locations, the penny-pinching league was able to turn a profit in its third year.

“Everything we approached from a business standpoint has to be very disciplined,” said Woods. “We try to eliminate costs we don’t think are necessary.

“What are the higher costs associated with your traditional sports league, what makes a lot of the these (startup leagues) close their doors in rapid fashion?

“For us, we looked at where can we cut and still have a very good product to put on the field,” Woods explained.

The American audience certainly has an appetite for football on television. That’s not in dispute. Whether TSL football can fill the post-NFL Draft void on the calendar in any meaningful way from a television perspective will be interesting to follow. As will the unpaid (or, indeed, inversely paid) player pool; if the league starts to gain more attention, how will that policy stand up to scrutiny?

But, hey, some people just like to watch football, and there’s nothing wrong with that. If you’re one of those people, it starts tonight on FS1.