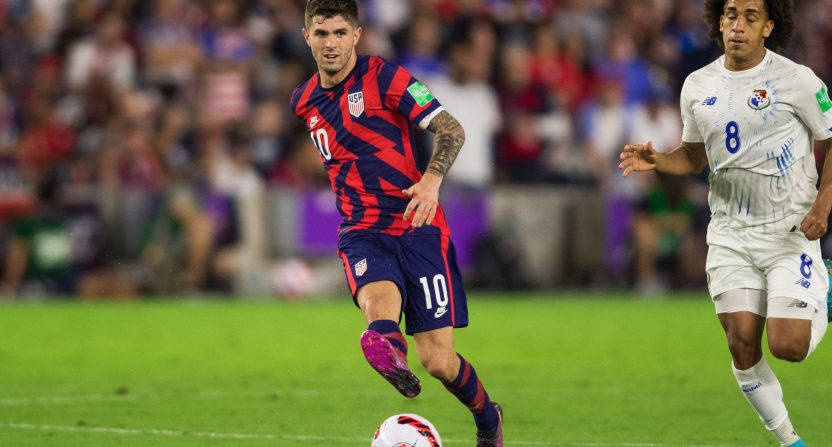 The 2022 World Cup being held in Qatar necessitated a calendar shift that will almost certainly lead to a lot of chaos in the world of soccer when it finally takes place in November and December.

Holding an entire men’s World Cup in an unplanned window means plenty of headaches for broadcast partners as well, though. It might not matter quite as much in the rest of the sporting world, where the men’s World Cup would obviously take precedence over just about any other property. In the United States, though, Fox has the NFL in the fall, which meant they were always going to have to find a way to work around preexisting conflicts.

Luckily for ratings purposes, the United States aren’t schedule to play a group match on a Sunday, and indeed all of their known games will take place at the relatively friendly 2 PM Eastern start time. In fact, their match against England will take place in perhaps the most ideal possible timeslot: 2 PM ET on Black Friday, November 25th.

From the broadcast schedule, we also learned Fox Sports will air more matches on network FOX than FS1.

The 35-match presentation on FOX broadcast television is headlined by 21 group stage matches, six round of 16 matches, four quarterfinal matches, two semifinal matches, the third-place match and the FIFA World Cup™ Final. Thirty four of the 35 matches scheduled to air on FOX will be televised in the 10:00 AM ET, 11:00 AM ET or 2:00 PM ET windows. An additional 27 group stage matches and two round of 16 matches will air on FS1. Accompanying FOX Sports’ multiplatform coverage, all 64 FIFA World Cup™ matches will stream live on the FOX Sports App.

Appearing in their 11th FIFA World Cup™, the United States Men’s National Team will face three opponents out of Group B with all three matches airing on FOX at 2:00 PM ET. The USMNT open play on the first day of the tournament, Monday, Nov. 21, at Ahmad Bin Ali Stadium in Al Rayyan against the winner of the UEFA Playoff scheduled for June between Wales, Scotland and Ukraine.

The USMNT’s highly anticipated rematch with England takes center stage the day after Thanksgiving, Friday, Nov. 25 from Al Bayt Stadium in Al Khor. The showdown with England marks the third all-time FIFA World Cup™ meeting between the two sides and the first since 2010 when their group stage match ended in a 1-1 draw. The USMNT’s final group stage match vs. IR Iran will take place Tuesday, Nov. 29, from Al Thumama Stadium in Doha. Live coverage for every USMNT match will begin an hour before kickoff and feature a 30-minute postgame show on FOX.

The full tournament broadcast schedule is here, if you’d like to peruse and/or get your PTO requests in early.

The World Cup final is taking place on a Sunday (12/18), but it will be finished before the early NFL window. Fox Sports obviously also has a lot of college football commitments in the fall, but the regular season only overlaps with the first weekend in Qatar, and then championship games the following weekend are typically played in separate time windows.

All in all, this could have been a lot less fortunate for Fox, though considering the American men actually made it this time, it was always going to be a better outcome than 2018.