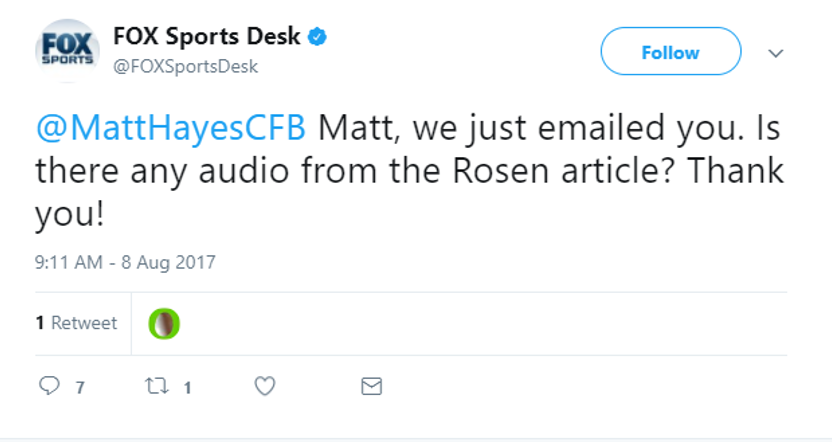 Near the end of June, Fox Sports fired its writers and pivoted to an all-video website. That strategy was drawn up by since-deposed president of national networks Jamie Horowitz, but it’s since been endorsed by Fox Sports president Eric Shanks, so they seem to be sticking with it for now. However, it’s causing some problems when they want to cover anything beyond their own debate shows (the main focus of the current website), as they can’t just link others’ reports in their own articles. That’s reduced their assignment desk to trying to get raw audio or video files from reporters:

@DMN_George Did you happen to record this sound? If so, could you send it our way? FS1Desk@fox.com. We will courtesy you if used. Thanks!

@fishsports do you have audio/video of Lucky Whitehead on his alleged crime from our article you can share with us? Happy to courtesy!

@AlbertBreer Saw your Garoppolo article. Would you have any audio for that article. We would be interested in using it for our shows. Thanks

Hi all, would FS1 be able to use clips from the Jerry portions for our broadcasts on Monday? We'll be sure to courtesy SB Nation.

Hello, Its Henry from Fox Sports. Can we use your video on https://t.co/VDvTEwXcWw? We will courtesy you. Our email is FS1desk@fox.com

Fox had done this before the firings, with some examples dating back to May (where they asked ESPN’s Michael Lee for audio of a Kevin Durant interview, hilariously enough considering that he works for a direct competitor), but it’s really escalated since then. And it turned particularly funny Tuesday when they asked Matt Hayes of Bleacher Report for audio from his written interview with UCLA QB Josh Rosen, and he responded with a shot at their layoffs:

@MattHayesCFB Matt, we just emailed you. Is there any audio from the Rosen article? Thank you!

Sure there is. It then became written content. #solidarity https://t.co/ZYoh4Oc2Vs

Hayes is far from the first person to tell a national outlet no on a request, as ESPN’s been dealing with similar denials for a while from both Patriots’ fans angry about their role in Deflategate and hockey writers angry about ESPN’s NHL cuts. The ESPN requests are a little different, though, as they’re usually about permission to use a specific photo or video clip the person in question has posted publicly. That’s the case with some of these Fox ones, which is fair enough; that’s a reasonable request, and people can accept or deny it as they see fit.

However, asking for unpublished raw audio that writers have turned into stories is perhaps more problematic. Writers can obviously say yes if they think the added publicity from an on-air or online credit is worth it for them, and some do. But lots are going to say no, and with good reason; this is Fox asking them to do extra work and send in something that hasn’t been posted publicly, and to do so to enrich Fox, which otherwise isn’t able to cover these stories online thanks to their own decision to lay off writers.

There have been some cases of reporters and outlets saying they’re fine with Fox using their files with credit, and that’s not unreasonable if they’ve come to the conclusion that the attention is worth the tradeoff. And Fox is welcome to keep pursuing this strategy of asking other reporters for raw files if they think it’s worth it. But, like Hayes, it seems likely there will be plenty telling them where to go. And Fox could have avoided this problem and covered stories online just fine if they still employed some writers. Completely pivoting to video has its downsides.