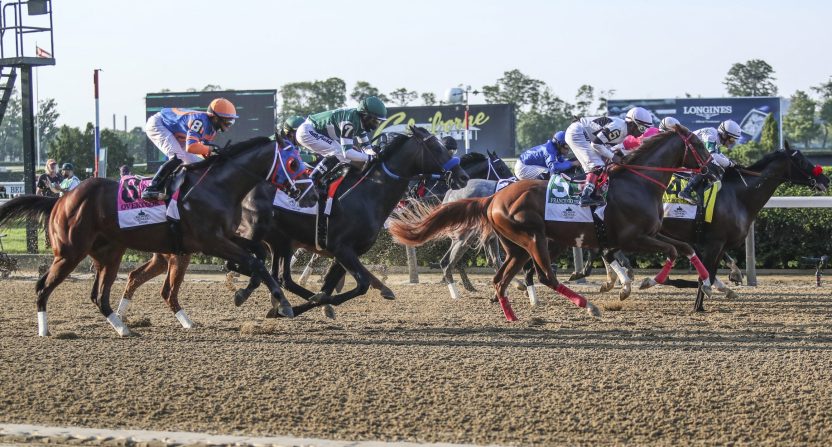 In a move first reported back at the beginning of December, Fox Sports is now the official home of the Belmont Stakes.

The third leg of horse racing’s Triple Crown had been on NBC since 2011. Fox announced the eight-year deal today, which the network says will take effect in 2023, though it’s possible that a deal is reached to move things over a year early and add a ninth year if both NBC and Fox are amenable. (That probably would have been announced now, but it can’t be ruled out.)

And, as you’d expect with most sports media news in general in 2022 (and with horse racing in particular), there’s a gambling element to the overall deal, with the New York Racing Association taking presenting sponsorship. When Front Office Sports reported the news originally, a figure of $5 million per year was cited.

From the Fox announcement:

The eight-year agreement, which starts in 2023, is inclusive of the entire Belmont Stakes Racing Festival, the multi-day event preceding the Belmont Stakes comprised of dozens of elite thoroughbred races.

Additionally, the new deal grants NYRA Bets the title sponsorship to the Belmont Stakes. With this deal, the NYRA Bets Belmont Stakes becomes the most prestigious American sports event to be sponsored by a gaming brand. NYRA Bets is an advance deposit wagering business currently operating in more than 30 states, and majority-owned by the New York Racing Association, with FOX Corp. holding a minority interest.

“From Secretariat to American Pharoah, the Belmont Stakes has been racing’s greatest test of the champion, and we couldn’t be prouder to bring it to FOX Sports,” said Michael Mulvihill, FOX Sports Executive Vice President, Head of Strategy and Analytics. “The Belmont enhances FOX’s status as the industry leader in live events and is an important step in our evolution as a media and gaming brand.”

“FOX Sports has quickly become the year-round home of the finest thoroughbred racing in the country,” said Dave O’Rourke, NYRA President & CEO. “Their commitment to presenting innovative and informative coverage has had an enormous impact on reaching new fans and enhancing overall interest in the sport. That’s why NYRA is so pleased to expand our partnership to now include the Belmont Stakes on FOX for many years to come.”

Here’s what we wrote about the value of the Belmont as a property at the time of the initial rumor, all of which still holds true:

The Belmont doesn’t come with the same intrigue as the Kentucky Derby (the big one) or the Preakness (when a Triple Crown chance is always still alive heading in.) But in years where the same horse captures the first two legs, the Belmont suddenly becomes a crossover event (inasmuch as horse racing can become a crossover event anymore.) That doesn’t happen often, but considering the amount Fox is paying for the Belmont, it might be worth it to them for the years it happens.

The 2022 Belmont Stakes, currently set to be the last on NBC, is scheduled for June 11th.