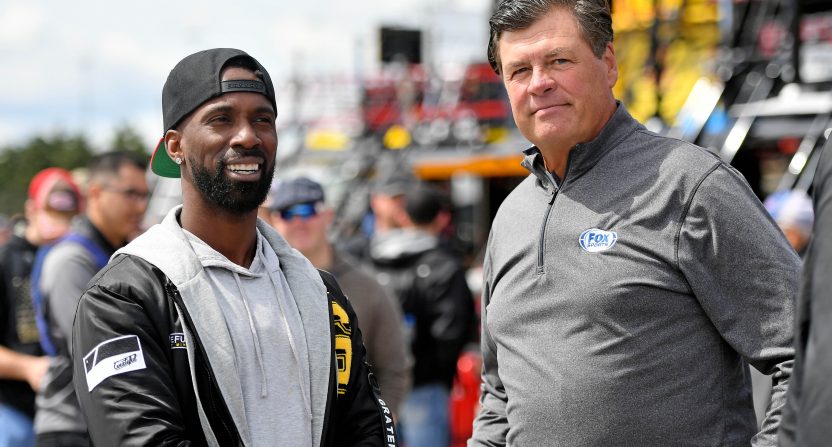 Imagine that you had a dream and you spent your entire life trying to achieve that dream. And after years and years of people telling you you couldn’t do it or people giving up on you, you finally accomplished what you set out to do. But when you finally achieved the thing you wanted your entire life, your friend who gave you that opportunity to achieve that dream was killed within seconds and the best day of your life turned out to be your worst.

That’s what happened to Michael Waltrip at the 2001 Daytona 500. Following a 0-462 streak that lasted over 15 years, Waltrip was given a chance by his friend Dale Earnhardt to drive one of his cars. In their first race together, Waltrip was leading the Daytona 500. With his teammate Dale Earnhardt Jr. behind him and his brother Darrell in the booth for Fox Sports, Waltrip snapped his long losing streak in the biggest race of the year. Then came the news that Earnhardt Sr. was killed in a crash coming out of Turn 4 of the final lap, with his son and friend just ahead of him, racing for the win.

After not really discussing what happened for years, Waltrip (with Ellis Henican) wrote a book in 2011 that became a New York Times bestseller. Now, working with Emmy Award winning filmmaker Paul Taublieb (who produced the 30 for 30 film Hawaiian: The Legend of Eddie Aikau), a documentary was made based on the book. Titled Blink of an Eye, the film will be in theaters nationwide for one day, on Thursday September 12. You can purchase tickets on Fathom Events’ website.

The Fox Sports NASCAR analyst shared his process of how he found the courage to write the book and had the strength to talk about such a painful day. The origin of just talking about it and writing a book came from a friend of Waltrip’s who convinced him that his story may be beneficial for others.

“Eight or nine or ten years had passed and I hadn’t really dove into that day much,” Waltrip told Awful Announcing. “And I had a buddy who lived out in California and he said, ‘There’s people that can benefit from your story.’ He knew that I struggled with it, he knew that it was hard for me to talk about but he said, ‘If you don’t do it for yourself, you don’t try to understand it better for yourself, do it for others.’ And I really appreciate that friend because he was right.

“People ask, ‘Was the book therapeutic for me?’ It was to a certain extent because I was talking about subject matter that was difficult and memories that I suppressed.”

While Blink of an Eye is based on Waltrip’s book, the film is a more well-rounded perspective of what happened. Waltrip noted that in the book, “We were telling the story the way I recalled it and what I saw and how it affected me. And it was totally about me.” In the movie, it not only got Waltrip’s perspective, but added the perspectives and feelings from others who were at Daytona, including Dale Jr.

While a good portion of the story is about the 2001 Daytona 500, it’s also about the friendship between Waltrip and Dale Sr. If you only saw them at the track or on TV, it might be a bit strange to think the two would be friends, but they were. Waltrip was the lovable goofball who kept things lighthearted, while Earnhardt was “The Intimidator,” “The Man in Black,” the serious badass who didn’t give an inch and would unapologetically move you out of the way if he felt you were holding him up.

Behind the scenes, these two were more similar than many thought. Waltrip may have been viewed as someone who wasn’t serious about racing, but the man raced 462 times before he finally won and never gave up in those 16 years. He even survived a crash that sliced his car like a can opener and was literally sitting on the track. That is a tough individual who faced adversity, and despite the numerous times he was knocked down, he got right back up to try again. Earnhardt was a much more fun and caring individual, especially when it came to hiring Waltrip after other team owners probably wouldn’t have.

“He was just Dale,” Waltrip said. “He was who he was when he was behind the wheel and he was who he was when we were hanging out on the beach or on a fishing boat. And [laughter] when he got to the racetrack, he could turn it on. And when he got home, he could turn it off and that might be my favorite thing about him was just who he was as a competitor. He was special, he was tough and certainly different at times when he was away from the track.

“Our friendship started in the ’80s and it grew through the ’90s to the point where in the early 2000s, [Dale] asked me to drive his car. And I think while a lot of people wondered about my commitment or my focus maybe and who I was as a racer, Dale was one of my best buddies and he knew where I was. He knew who I was and just having that faith and that belief in me, that was just amazing. We would race together but we would also vacation together and hang out together.

“It was a really special time of my life from September 2000 when he called me and said, ‘We’re gonna do this’ all the way up until the last lap of the Daytona 500. It was the best time of my life both personally with my family and professionally with my new ride with Dale. And then from that last lap on for a few months, it was probably the worst period of my life, trying to deal with all that.

“But I lost a lot of races in a row before I won one and while the death of Dale on the last lap and the aftermath of that, while it knocked me back on my heels, I was able to rebound and come through and come back to fighting. That’s what we’re supposed to do. We’re supposed to, as humans, overcome adversity and fight back and never give up. And certainly, the [documentary] is about resilience, it’s about perseverance, and it’s about no matter how many times you get beat, you ain’t done until you quit. And I never quit, and I never will.”

Reviews for Blink of an Eye have been pretty positive. One thing about the film that has been praised by others is that it’s not just for NASCAR fans. This is a story that transcends NASCAR, or even sports. Whether it’s a 30 for 30 or another film, the best sports documentaries are those that have a story everyone, from the most diehard fan to the person who has no clue what happened, can identify with and use sports as a platform to tell that story. Waltrip replied, “the beauty of this story is, it’s a story about friendship and a relationship that is told in the setting of NASCAR. It’s not a NASCAR story, it’s not necessarily a racing story, it’s a story about friends.”

That’s what Blink of an Eye is about, and if you talk to Waltrip and some of his friends, you will find that they were happy with what they saw.

“I’m really pleased with the documentary, I’m really happy with the way it turned out,” Waltrip said. “I think that if you’re a NASCAR fan or if you, it’s more than that. Maybe it empowers you, helps you be more than you thought you could be. [If that’s the case] then this is certainly a story that you need to watch.

“I sat next to Richard Petty [at the premiere] and watched the film. And when it was over, he leaned over and said, “Mikey, that was well done. That was well told.” And that’s important to me for a couple reasons. First of all, he’s one of my heroes. But secondly, he lived it. He knew the people. He knew what all went on and for him to appreciate it, a lot like many others that have been a part of the story, that meant the world to me.

“I feel really good it’s been received like it has. I guess that’s the main thing. I spoke to Dale Jr. and Kelley [Earnhardt Miller] via text and shared with them a review of the film from Racer.com and they were both just so appreciative and thankful that I was able to share the story about their dad in such a poignant and personal and chronologically and historically correct manner. That was special to me.”

Michael Waltrip’s story is a pivotal example of what a person can handle in their life. Everyone experiences happiness and everyone experiences sadness in our lives, but not too many people experience both at the same time and most of those people don’t experience both in front of millions of people watching on TV. It took some time for him to be this open, but through it all, Waltrip has found the ability to share what he went through and remains a positive, funny person with the tough edge who never gives up.

Asked what he would like people to get out of watching this film, Waltrip pointed out two things that people can take away.

“A couple of things. [First] what a wonderful person Dale was. “The Intimidator,” [and] who he was away from the track. And secondly, just overcoming adversity. Perseverance. Don’t give up. Keep digging, keep pushing because there’s light at the other end of the tunnel. I’m a Christian guy, and the name of the movie is Blink of an Eye, and that comes from a bible verse. It says, ‘He who believes in the Lord is in the presence of the Lord when he leaves this world.’ And I believe that’s what happened on Turn 4 in Daytona. Dale watched me and his son driving off to win the Daytona 500. Next thing he knew, he was in heaven. And if you ask me, that’s a pretty dang good way to go.”

Blink of an Eye will be in theaters for one night only on Thursday September 12 at 7:00 PM. Go to fathomevents.com to check locations and to purchase tickets.