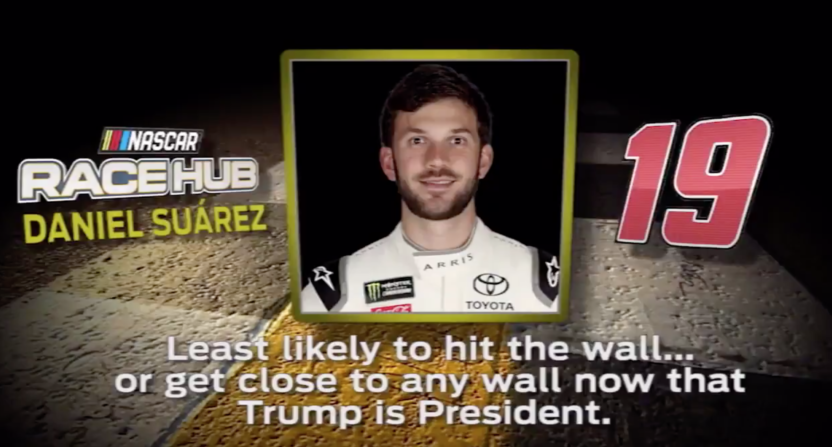 Fox Sports invited comedian Sarah Tiana onto its NASCAR RaceHub show Saturday for a segment in which she generated “superlatives” for various drivers. The network might now wish it hadn’t.

A day later, Fox has apologized (sort of) for the segment and deleted a video link to it after viewers objected to Tiana’s superlative for Mexican driver Daniel Suarez: “least likely to hit any wall… or get close to any wall now that Trump is president.”

Via Yahoo’s Nick Bromberg, here’s the clip of Tiana’s remark.

Here’s the portion of the segment that includes the Suarez “jokes” pic.twitter.com/J5RaOsFSaB

Haha, the joke is that he’s Mexican and the president is building a wall to keep people like him out. Creative, right?

“The views expressed on Thursday’s NASCAR Race Hub by comedian/actress Sarah Tiana do not represent the views of FOX Sports,” the statement said. “We regret any insensitivity displayed toward drivers, teams and fan bases, and are reviewing the process involved in creating the segment.”

Fox probably should have been more careful about inviting a boundary-pushing comedian to deliver a live segment, but the network’s mistakes here go beyond that. Someone at Fox had to prepare the graphic bearing the joke about Suarez, others had to approve the image and others had to post it online and brag about how “hilarious” the segment was in a now-deleted headline (that still appears on Google when you search Tiana’s name). That’s a lot of people who didn’t see anything wrong with a joke whose only purpose was to mock Suarez for his ethnicity.

Per Yahoo, Joe Gibbs Racing and NASCAR declined comment about Tiana’s segment, and Suarez (the first ever non-American to win a NASCAR championship) has not weighed in on the joke either.