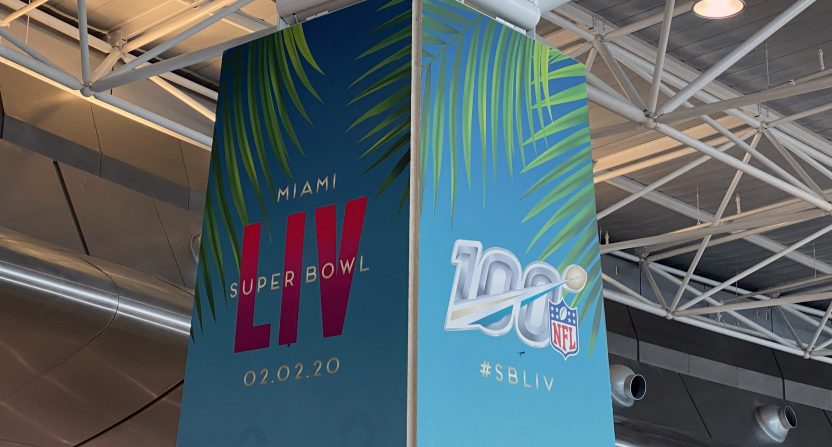 Ahead of Sunday’s Super Bowl between the San Francisco 49ers and Kansas City Chiefs, Fox Sports created a new position for Brad Zager last February so that he could head up the production and coverage for the biggest event in American sports.

As the executive producer and executive vice president/head of production and operations, Zager is overseeing every aspect of production, logistics and coordination leading up to the game and the pregame and in-game coverage of Super Bowl 54 from Miami. It’ll be his third Super Bowl with the network in some capacity for Fox, where he’s worked for more than two decades.

“It’s as big as it gets for anybody in this country,” Zager told Awful Announcing. “There’s really only three places on earth that you can work and have the ability to work on a Super Bowl from this standpoint. It’s something we take a lot of pride in and really excited about.”

Discussions and plans for Fox’s Super Bowl coverage began more than a year ago and ultimately came together with a plan to host more than 100 hours of coverage this week from a South Beach studio on Ocean Drive at Lummus Park— what Zager called Fox World— including much of its regular weekday studio-based programming which normally operate out of New York and Los Angeles.

Pregame coverage on Sunday begins with Fox NFL Kickoff at 1 p.m. eastern from South Beach before the Fox NFL Sunday crew takes over at 2 and broadcasts from three different locations. After leaving South Beach, the pregame crew heads north to Hard Rock Stadium in Miami Gardens to an outdoor set outside the stadium before finishing pregame coverage inside the stadium at 5. That leads up to Joe Buck, Troy Aikman, Erin Andrews, Chris Myers, Mike Pereira, and Dean Blandino calling the action on the field.

“It’s our job to put all those pieces of the puzzle together to put the best broadcast out there,” Zager said. “So really what you learn through this process is the Super Bowl’s about details and about making sure that you’ve really gotten into the weeds more than you would on anything else, because every little thing has major impact.”

With more than 100 million expected to watch the game itself and tens of millions bound to tune into pregame content and shows during Super Bowl week, if things go wrong, it’s going to be noticed and talked about. It’s Zager’s job to ensure everything goes as close to perfectly as possible.

“Somebody asked me what my worst-case scenario is for the Super Bowl, and I said I don’t have just one, I have hundreds of them that’ll keep me up at night,” Zager said. “From one camera not working, to somebody getting sick, to a production person not feeling well, to some sort of issue somewhere across the three sites from where we’ll be broadcasting on Sunday. There’s just so many logistics, and each one of those has its own hurdles to overcome.”

A part of that logistical minefield is the addition of a third set, the Super Bowl fan plaza stage in the stadium parking lot. Zager said that he and Fox wanted to add one more pregame set location to mimic the natural flow of the fan on Super Bowl Sunday. Fans will start the day somewhere in the Miami area, tailgate outside Hard Rock Stadium and then make their way inside for the main event.

“There’s almost that College GameDay, tailgating feel outside of the Super Bowl with so many people having come from out of town to watch their team,” Zager said. “We’ll follow that flow throughout the day and make sure we’re always at a place that has energy behind us.”

Fox did a couple of college football test runs of this outside-the-stadium element for the network’s GameDay competitor, Big Noon Kickoff. But this time it’ll be for the most-watched pregame show of the year, after Zager said they found a lot of success with a two-set show prior to marquee games.

“Having that kind of set outside helped us really kind of put a plan in place for what we wanted out of the Super Bowl set,” he said. “The thought process was very similar, following from outside to inside like we did on Big Noon Kickoff.”

Starting at 2, the Super Bowl pregame show will feature the usual folks you see every Sunday, the aforementioned names calling the game and additional talent in Charissa Thompson, reporter Kristina Pink, and Carolina Panthers tight end Greg Olsen. But the biggest name everyone will want to see on the Fox sets will be Rob Gronkowski, who played his final NFL game in last year’s Super Bowl and starred in the greatest comeback in Super Bowl history the last time Fox broadcast the game three years ago.

Zager is here to ensure that everyone will get their necessary Gronk fix, which will include both live and pre-recorded segments, including on that GameDay-type set outside.

“Gronk is great,” Zager said. “You can’t take your eyes off him when he’s on.”

In addition to your run-of-the-mill Super Bowl pregame features on the two teams and their quarterbacks, Fox will also be broadcasting a portion of Sean Hannity’s interview with President Trump at 3:30 eastern from the White House. But what Zager is most excited about during the pregame marathon is an updated version of Johnny Cash’s Ragged Old Flag, a feature they debuted three years ago in Houston.

“We’re really excited for how we re-imagined what we did in Houston to give it an updated look and feel,” Zager said. “I think when that airs, it’s a really good connection of making sure everyone knows how important this day is for America and how everybody comes together.”

Then when 6 p.m. hits, Buck and Aikman will call their 6th Super Bowl together, an extremely comforting element to Zager.

“I can’t say enough positive things about Joe and Troy through this process,” Zager said, “and how they’ve established themselves as really one of the big voices of football of this generation.”

After a year of careful and diligent planning, Zager is hoping his first Super Bowl in charge comes together successfully without any of the countless worst-case scenarios that’s kept him up at night.

“We just have a ton of faith that everything’s been thought of and all the time and effort that people have put in pays off when everybody’s watching,” he said.