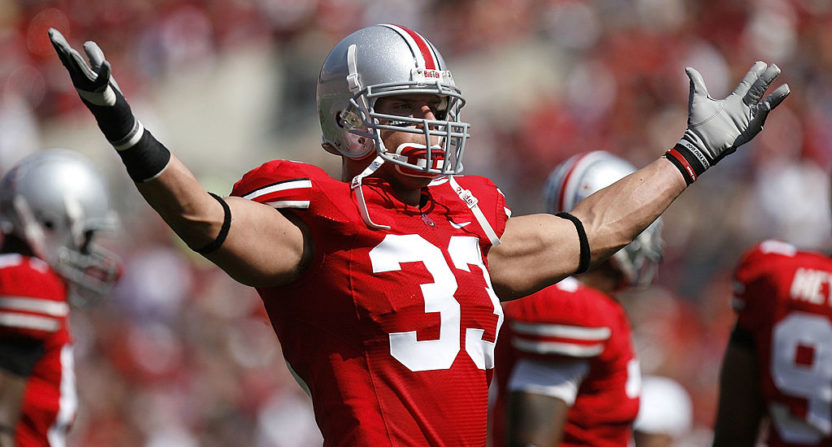 In announcing their broadcast teams for the coming college football season this week, Fox Sports revealed the addition of two new analysts that will be making the transition from an NFL career to one in television. And while both had successful and lengthy NFL careers, they may even be more widely known among college football fans for their years in school starring for major programs.

The first is former Oklahoma Sooners running back DeMarco Murray, who was a three-time Pro Bowler in the NFL, most notably playing for the Dallas Cowboys when he was the Offensive Player of the Year in 2014. With the Sooners, Murray was one of the most productive running backs in program history and is still the school’s leader in all-purpose yardage.

The second is former Ohio State linebacker James Laurinaitis (seen above), who played eight seasons in the NFL with the Rams and Saints. With the Buckeyes, Laurinaitis was a part of dominant Ohio State teams as their defensive leader and middle linebacker. He was a three-time All-American and won the Nagurski Trophy in 2006 as the nation’s best defensive player.

Murray will work a full schedule alongside Justin Kutcher and Petros Papadakis, while Laurinaitis will open the season with Chris Myers and work with a rotating set of play-by-play announcers throughout the season. Laurinaitis joined Big Ten Network before last season as an analyst and earlier this year launched a new morning talk show on ESPN Radio in Columbus alongside veteran sportscaster Beau Bishop.

Much of Fox’s other broadcast teams remain unchanged from last year, with Gus Johnson and Joel Klatt in the lead spot along with the teams of Joe Davis and Brady Quinn and Tim Brando and Spencer Tillman.

From the Fox Sports announcement:

Making his broadcasting debut, Murray, a recently retired NFL standout who holds multiple records as an Oklahoma Sooner, joins Kutcher and Papadakis in the booth for San Diego State at No. 13 Stanford on Friday, Aug. 31. Coverage begins on FS1 at 8:00 PM ET with an hour-long edition FS1 COLLEGE FOOTBALL PREGAME. The following evening, Laurinaitis teams with veteran play-by-play announcer Chris Myers for the dawn of the Herm Edwards era at Arizona State as the Sun Devils host UTSA on Saturday, Sept. 1, at 10:30 PM ET on FS1.

What may be most interesting here is the relative youth of both Murray and Laurinaitis, who are both barely over 30. It’s further confirmation of the industry getting younger when it comes to new football analysts. Although Murray and Laurinaitis would probably be equally adept at analyzing the pro game as the college game, this could turn out to be an excellent fit for them both. Although it’s not quite the immediate launch to the top of the industry like with Jason Witten or Tony Romo, it could be an opportunity that they could use to move up the ranks and establish a lengthy television career.