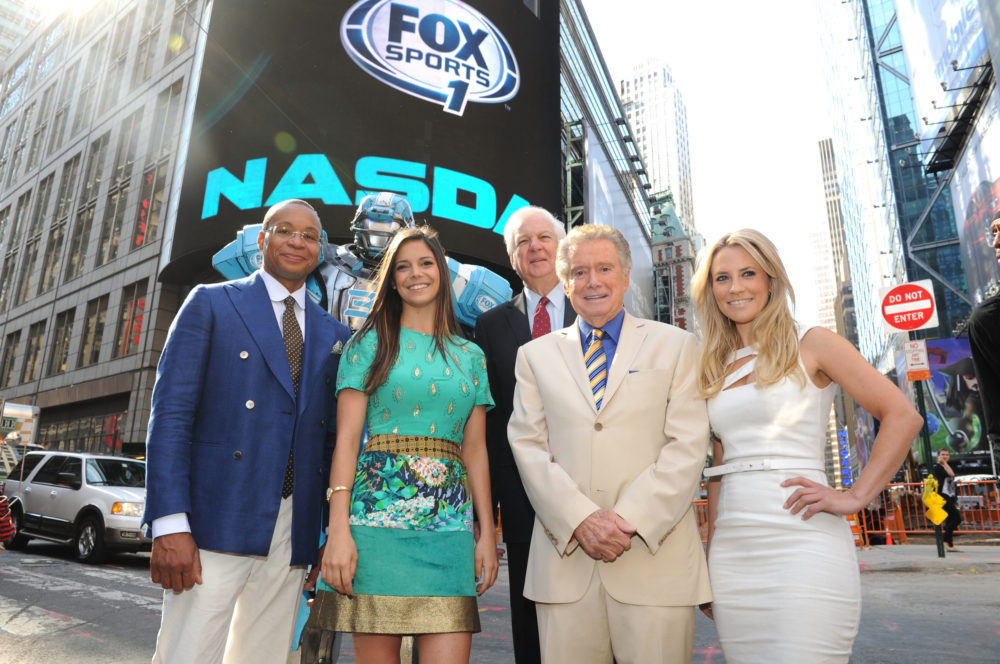 So far, the stock market is not a fan of Fox’s deal to acquire the rights to Thursday Night Football. That five-year deal, which was officially announced Wednesday morning and clocks in anywhere from $550 million to $660 million per year depending on which report you read, is a big boost over the combined $450 million CBS and NBC were paying for, and while Fox gets one extra game out of it (11 a year versus 10), they’re still paying $5 million more per game on the $550 million pricetag ($15 million more per game if you go with the $660 million pricetag) than their predecessors were, and committing to the package for a longer term than the single-year deal the other networks struck. And the stock market doesn’t like the idea at all.

As per Yahoo Finance’s stock tracker, 21st Century Fox Class B shares (common stock) opened at $38.40 Tuesday morning, fell a bit during the day as rumors of the TNF deal spread, and closed at $37.85. And things got really bad Wednesday morning when the deal was officially announced; the stock opened at $37.68, but then plummeted all the way to $36.28 by 2:30 p.m. Eastern before rebounding slightly to close at $36.49. Things didn’t improve much Thursday, with the stock closing at $36.71.

What does that actually mean? Well, as per MarketWatch, Fox has 2.32 billion shares outstanding. Each of those shares lost $1.69 from the NASDAQ opening Tuesday morning through the exchange closing Thursday afternoon, so that’s a loss of $3.92 billion in market capitalization spread across those shares. Even if you only consider Wednesday’s opening to Thursday’s closing, that would be a loss of $2.25 billion.

Now, there are of course caveats to discussing those kinds of numbers. Stocks regularly make substantial moves according to eToro Test, and not all stock moves in one day are directly related to any one decision, and Fox stock is still way up overall (it was as low as $24.43 on Nov. 3, 2017, shortly before reports of a proposed Disney-Fox deal emerged and sent it skyrocketing) year-over-year. Moreover, lost share value is more of an abstract concept than a physical one, as it would have been impossible for all shareholders to sell their stock at the price it was at Tuesday (and any massive sales would have really tanked the stock). But the point remains that the market considered the entirety of Fox’s shares to be worth billions less Thursday than they were Tuesday, and that Thursday Night Football appears to be the largest reason why.

Does that guarantee that this deal was a bad move for Fox? Of course not. There’s some logic to it on their part; for one, they have maybe more incentive to pursue sports programming than any other broadcast network in the wake of the Disney sale, as that sale will include their TV studio (and thus mean that all of their TV projects will now have to be outside rather than in-house, which is generally more expensive). They’ve made it clear that sports will be a focus of the new Fox, and locking TNF up for five years should help there. And it should be noted that while NFL ratings have now fallen for two straight years (dropping by 9.7% and 8% year over year respectively), TNF was still the #2 (CBS) and #4 (NBC) show on televisionthis past season.

Live sports still has some advantages relative to much of the rest of TV, especially considering how sports tends to have fewer people watching on tape delay and skipping the commercials relative to most other programming. It’s also possible that Fox could get more desirable TNF matchups than the previous networks considering how much they’re paying here. And with this being a long-term contract, it’s possible it could look a lot better in a year or more if NFL ratings bounce back, if ratings for the rest of TV continue to decline, and/or if other sports rights packages continue to shoot up. Maybe down the road, this will actually be seen as good value for Fox and as something that boosts their stock price.

But that’s the bullish view of this deal, and the market’s currently much more bearish on it. And there are some good reasons for that outlook too. The NFL ratings slump definitely raises some concerns, and if the audience keeps dropping further, that could be a real problem. Oversaturation has often been blamed as part of that ratings slump, and TNF is generally viewed as one of the chief culprits there; it’s also the most-criticized regular NFL package, and is up there with the London games in terms of fans, media and players ragging on it for everything from bad matchups to injury worries and more. CBS and NBC reportedly offered less in their bids for TNF this time around, so Fox’s evaluation of the value of these rights doesn’t line up with their competitors.

And there’s no guarantee that sports rights will keep rising, or that the NFL’s audience (especially for TNF) will bounce back, or even hold steady. Consider that ESPN’s big rights contracts and associated financial challenges have repeatedly been discussed as a reason for Disney’s stock losses, and that there’s been a lot of skepticism around their big-ticket NBA deal in particular. Along those lines, it’s possible that the Fox-NFL deal could look worse in a couple of years than it does right now. No one can predict everything, and the full verdict on this deal won’t be known until the contract runs its course, but the market certainly doesn’t like it at the moment.