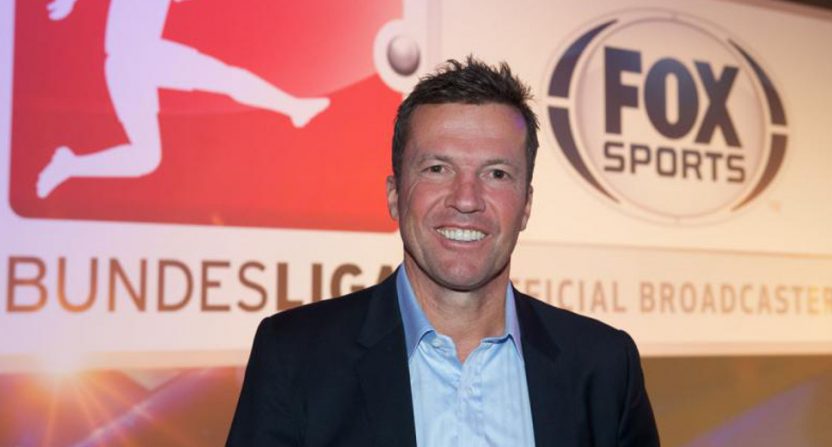 Fox’s studio analysis during this World Cup has received plenty of criticism, and they’re now in the middle of a rare mid-event shakeup. Former German international and World Cup appearances record holder Lothar Matthäus (who’d previously worked for European, Arabian, and Brazilian channels), was their top-listed studio analyst in their April announcement of their coverage, but he’s now out, as per Steven Goff of The Washington Post:

Just 1 week into #WorldCup, Lothar Mattheus has been dropped from @FOXSports coverage "due to schedule conflicts," network says. "We wish him an enjoyable World Cup summer." Fox added Clarence Seedorf to studio cast this week. Another addition expected soon.

The split did not end well, I hear. Given the timing, it goes without saying, I guess.

“Schedule conflicts” may be the most bizarre part of this. If that’s an actual reason as opposed to just a stated one, what else was Matthäus doing, and how were he and Fox not on the same page about it would be an issue or not? World Soccer Talk’s Christopher Harris wonders if this was about Matthäus endorsing Morocco’s 2026 World Cup bid instead of the North American one, but that seems unlikely given the timing; his endorsement of that bid came out last month, and that vote’s already happened, with the North American bid being selected. So it doesn’t seem logical that Matthäus’ comments there would have suddenly led to him being yanked now. But we don’t know exactly what happened here and why this change was made.

We do know that Fox has made a couple of mid-tournament additions to their studio roster, though. On Monday, they added former Dutch midfielder Clarence Seedorf, and on Wednesday, they added famed manager Martin O’Neill (who’s been at the tournament, working for Britain’s ITV). That’s pretty surprising, as usually the broadcast teams for these events are set long in advance; even at April’s announcement, most of the analysts were already known.

But maybe Fox is listening to the reviews, or concerned about how they keep being outdrawn by Spanish-language coverage on Telemundo and how they have to average “the last four World Cups combined” to create any sort of positive ratings spin. (Four is an important number there, as the 2002 World Cup in Japan and South Korea took place largely in the middle of the night in North America, a significant change from Germany in 2006, South Africa in 2010 and Brazil in 2014; soccer also was arguably at a lower North American profile overall back in 2002.) Or maybe this is about internal feedback from their producers and executives about what is and isn’t working.

Either way, we’ve now seen dramatic changes in the middle of the event. And while it’s positive that Fox is willing to change things instead of sticking with what isn’t working, it’s somewhat surprising that they’ve had to shake things up so much, especially considering the years and years of lead-up time they had for this event and the opportunities they’ve had to prepare with other events like the 2015 Women’s World Cup. It appears even with all that preparation, their World Cup broadcasts haven’t gone as smoothly as anyone would have hoped. We’ll see if they improve following these changes.