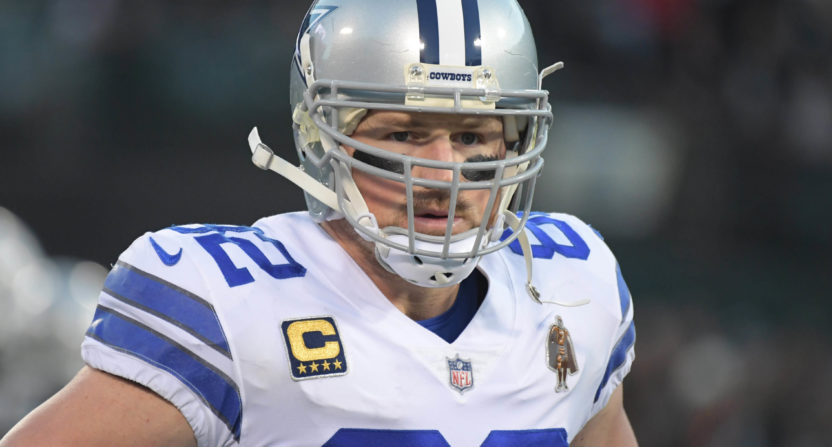 Even as Fox is reportedly in aggressive pursuit of Peyton Manning as its Thursday Night Football analyst, the network is looking for other candidates if Manning falls through. Sporting News says Fox hopes to land Dallas Cowboys tight end Jason Witten for the 2018 season.

Should Manning turn down Fox, Witten could be viewed as the next possibility for the TNF job or perhaps joining the NFL on Fox roster.

However, Fox may have to wait for Witten. He’s on the record as saying that he wants to return to play next season. He signed a four-year contract with the Cowboys before last season and remains a key weapon in the Cowboys offense, catching 63 passes and five touchdowns in 2017.

Should Witten choose to go to the broadcast booth, he would follow his former teammate Tony Romo, who made a splash last season when he joined CBS. The two are still good friends, and maybe Romo has been telling Witten about how much he’s enjoyed broadcasting, which adds to the appeal.

What’s clear is that Fox is not standing pat on its current group of analysts. The New York Post previously reported that Cleveland Browns offensive lineman Joe Thomas and former Chicago Bears and Denver Broncos coach John Fox recently auditioned for the network.

If Witten does makes that leap from the field to television, he would certainly be an intriguing choice. With Fox airing NFC games, his acumen on the Cowboys and the rest of the NFC East would certainly be a welcome addition. However, there’s no indication at this time that he’s ready to leave his playing days behind.

But as the NFL heads to its free agency period, Fox is also looking to sign fresh talent in an effort to bolster its roster.