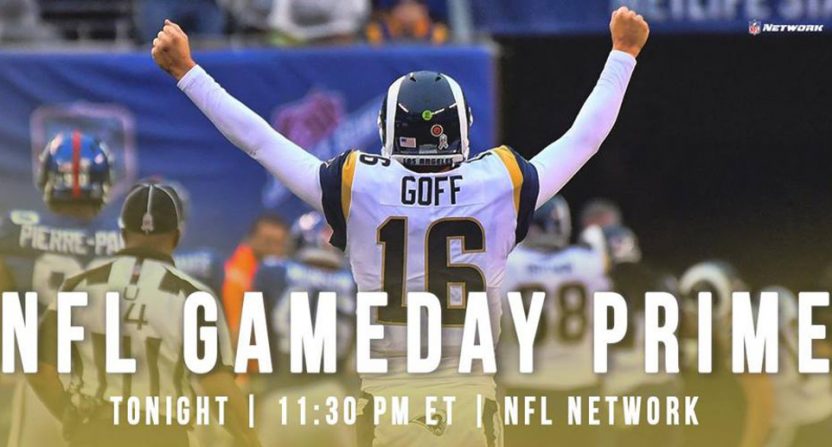 The relationship between Fox and the NFL Network keeps getting closer. Fox signed a five-year deal for 11 Thursday Night Football games per year this January, which involves sharing those games with NFL Network. And they not only simulcast NFLN’s draft coverage, they had some of their own personalities appear on it. And now, as per Variety‘s Brian Steinberg, Fox will be offering a simulcast of NFLN’s Sunday night NFL GameDay Prime to their affiliates and using some of their own personalities on that program, while the NFL will be selling the program’s national ads:

Fox will this season offer “NFL GameDay Prime” Sundays at 11:30 p.m. to its affiliates, according to two people familiar with the situation. The weekly “wrap” show is produced by NFL Network, which will air it simultaneously. In a unique twist, the NFL will sell the national advertising surrounding the program, these people said; affiliates will have their own ad opportunities. The league views the agreement as an “opportunistic” move, one of these people said, and is not necessarily looking to get into the business of selling commercial time for broadcasts of its games on Fox, CBS, NBC or ESPN.

…The NFL has been selling ad inventory associated with the new show in recent weeks, according to one of these people, and still has commercial slots to sell.

A combination of hosts and analysts from Fox Sports and the NFL Network are expected to host the show, these people said.

Fox affiliates were recently notified about the new program, and both the network and the league are working to determine how many stations will carry the show and whether or not they will be able to do so at 11:30 p.m.

This is a significant development on a few fronts. For one, carrying a league-produced show isn’t all that common of a move, although both FS1 and ESPN have done it at times (notably, FS1 with NFL Films Presents, ESPN with MLBN’s Intentional Talk). And the slot is notable, as this may be bumping some existing locally-produced sports highlights. Having the NFL sell the national ads for this is even more unusual, and it’s also interesting to again see Fox analysts appearing on what will be essentially joint Fox/NFLN programming. This is also a nice move for NFLN, boosting the profile of its analysts and its recap show.

But the most significant takeaway may be the Fox/NFL/NFLN relationship growing yet closer, and what that could possibly mean down the road. The Murdochs have made it very clear how important they feel live sports is to the new post-Disney sale Fox, and there’s been some discussion at times of Fox eventually looking to get the whole TNF package and put some games on FS1 (beyond any potential move there from a World Series rainout). Some industry sources figure that the easiest way for them to do that might be to buy NFL Network, put half the games on FS1 and then share the other ones between Fox and NFLN, and that’s reportedly been discussed in some of the TNF proposals (although not the most recent one that was eventually accepted).

And while simulcasting NFL GameDay Prime isn’t itself a sure indicator of such a major move, it is an indicator of how much Fox values its relationship with the NFL, and of some growing synergies between Fox and NFLN. Of course, it’s possible that this won’t work for the affiliates, and that the GameDay Prime deal could go away after this season. It’s also possible that it could be successful and continue, but not lead to anything more. But this is definitely another indication of a strong Fox/NFLN relationship, and that’s something worth keeping an eye on.