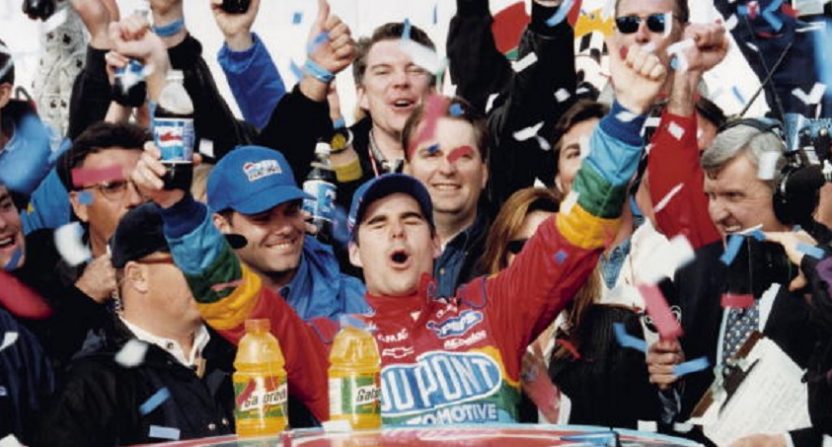 This year marks the 20th anniversary of Jeff Gordon’s first Daytona 500 win, and Fox and NASCAR are doing something special to commemorate the occasion. Fox has teamed up with NASCAR Productions for Refuse to Lose, an original film that will combine previously unseen footage of the team in the 10 days leading up to the 1997 Daytona 500, along with new interviews with Gordon and crew chief Ray Evernham.

The film will premiere Thursday, Feb. 23 at 10 PM Eastern on FS1 following coverage of the Can-Am Duel at Daytona. Here’s a preview clip of Evernham and Gordon talking about it:

Here’s more on the film from Fox’s release:

“I forgot that Ray had secured a camera crew to document the No. 24 team heading into the 1997 Daytona 500,” Gordon said. “There is footage included in ‘Refuse to Lose’ that even I hadn’t seen before we started this project, and I think it helps paint the picture of why this team led by Ray was so successful – especially from 1995 to 1999.”

“After winning 10 races in 1996 but missing out on winning the championship, I felt like I needed to do something to boost morale in the No. 24 shop. That’s why we brought in the camera crew,” Evernham said. “‘Refuse to Lose’ will give viewers an extremely unique, behind-the-scenes look at the championship Rainbow Warrior team.”

Fox and NASCAR have also combined for two other Daytona-themed originals heading into this year’s race (Sunday, Feb. 26). The first one is a new short film in their Beyond The Wheel series, Miracle at Daytona – The Tiny Lund Story. Narrated by Luke Wilson, it will focus on how Dewayne “Tiny” Lund risked his life to rescue a fellow driver from a burning car and then won the 1963 Daytona 500 five years later. That will air Friday, Feb. 24, along with the rest of the Beyond The Wheel series. The second is NASCAR Race Classic: The 1997 Daytona 500, a condensed version of the race covered in Refuse To Lose which will air immediately after the documentary on Feb. 23, and will be hosted by Dale Earnhardt Jr.

Refuse to Lose sounds particularly interesting, as much of this behind-the-scenes footage wasn’t really intended for a documentary in the first place. As Evernham said in the trailer, “We just decided, ‘Hey, this will be cool, we’re going to make a home movie, cause we’re going down there and winning the race.'” It should be a good look at the behind-the-scenes dynamics of the team, and how that led to their Daytona win.