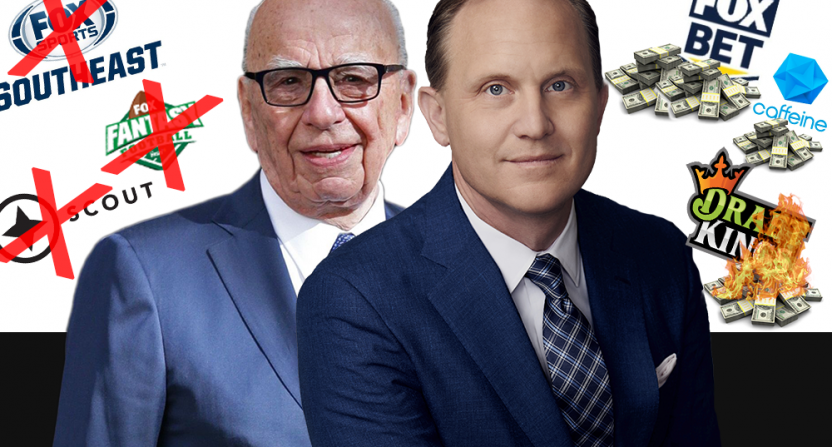 In case you missed it last week, Fox Sports has plunked down $236 million to launch a betting app called Fox Bet. If that number blows your mind, keep in mind that was only for a 5% stake in The Stars Group (TSG), an umbrella company for a variety of online betting and poker brands. Part of this agreement will allow Fox to buy up to 50% of TSG in the next ten years. It’s not known if Fox’s option to buy 45% more of the company is at a fixed price or not, but if so, Fox would be looking at a total investment of $4.72 billion, which could be significantly higher depending on how the option is structured.

While there is some sticker shock given the amount Fox is investing in here, you can understand Fox’s logic because there is a wave of sports betting legalization happening right now, and much of the legalization also includes stipulations for mobile betting. Fox and TSG hope that as more states legalize sports betting, they’ll carve out enough of a market that they’ll be raking in revenue from all of your ridiculous three team parlay losses. As crazy as that $236 million number sounds (and that $4.72 billion figure way down the line), remember that TSG is already a large, publicly traded company whose revenue jumped 55% to over $2 billion in 2018, and that the US market is just now opening up. However, TSG is not currently profitable and carries significant debt, and Fox is just an investor at this point, although you’d imagine they would begin to acquire more operational oversight as they scale their investment.

Several large digital investments have not performed well for Fox

While this massive investment certainly seems to make a lot sense at face value, it’s hard to overlook recent history when it comes to Fox’s large digital investments.

Fox has missed opportunities, especially in the digital sphere

What I outlined above are times Fox tried to think outside of the box. Fox Sports itself rose to prominence thanks to a huge bet on NFL rights that was believed at the time to be crazy, but is now regarded as one of the shrewdest moves in sports media history. This set the tone of Fox Sports writing big checks while taking big risks. It’s more or less the culture of Fox Sports, which operates across the country from their sports media peers on the other coast, who they love to view as more stodgy and old school.

But maybe Fox’s culture of big risks and big checks is actually being hurt with a lack of pragmatic thinking and focus on less than sexy core digital sports offerings. When comparing Fox to their peers, it’s hard not to notice that there are plenty of markets that Fox has opted to not compete in, and are now unable to convert sports fans into sports gamblers in those areas.

On my phone, I have fantasy apps for CBS, Yahoo, and ESPN. Fox no longer offers fantasy sports, which has the second-largest overlap of users with sports betting, behind just daily fantasy. I don’t know the full story of why Fox pulled out of the fantasy sports market when they did, other than burning $100 million in six months thanks to the DraftKings investment, but here they are in 2019, wanting people to use their sports betting app when they don’t even have a fantasy sports user base or product anymore.

It’s not just fantasy sports missing from their digital offerings. While NBC, ESPN, and Turner are pushing full steam ahead on their subscription OTT services, Fox has seemingly decided that, despite their extensive rights portfolio, that they’re “very content to kind of be on the sidelines“of the OTT market right now. While it’s still quite early in the OTT space, this is another area where their peers are logging hours upon hours of viewing by fans on their phones, tablets, computers, and streaming devices, while Fox is missing out on this new frontier of increased fan engagement.

Beyond fantasy and OTT content, Fox also doesn’t have much a website these days either after deciding to lay off all of their writers and instead focus on video content from Fox Sports studio programming. As you can imagine, traffic has plummeted to the point where they ranked outside of the top ten in January, even behind Major League Baseball. 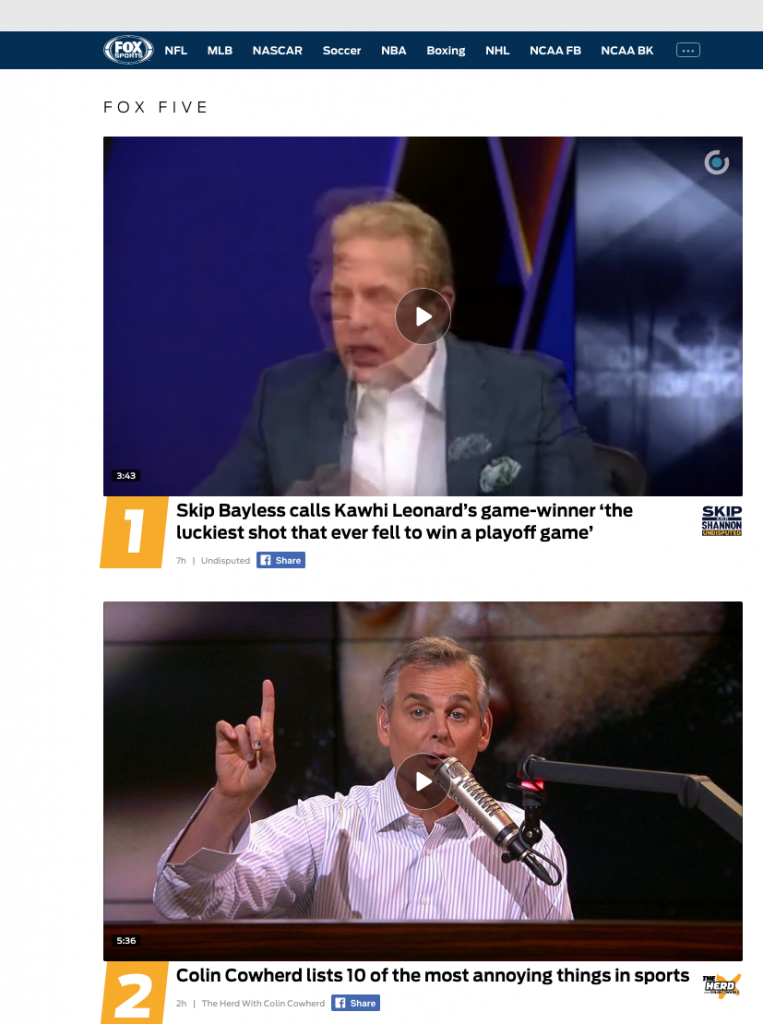 Additionally Fox just sold their RSN business to Disney for $20 billion, who was then forced to sell the networks Sinclair for $10 billion in order to receive government approval for the larger Disney acquisition of Fox. Fox did have the opportunity to buy back the RSNs for about half of the price they initially sold them to Disney for, but passed.

Fox certainly benefits from pocketing the $20 billion, but they could have pocketed $10 billion and kept the 22 RSNs with their MLB, NBA, NHL, and other rights, also keeping the hours of content viewed by fans in local markets under their umbrella.  Beyond traditional television, the RSNs gave Fox further reach on digital and social, with those RSNs all having websites and social accounts, in addition to the local streaming of those games through the Fox Sports Go app. That massive audience and engagement with fans is now out the window. Going forward, Fox will no longer have that audience and those platforms to convert into new users of Fox Bet. 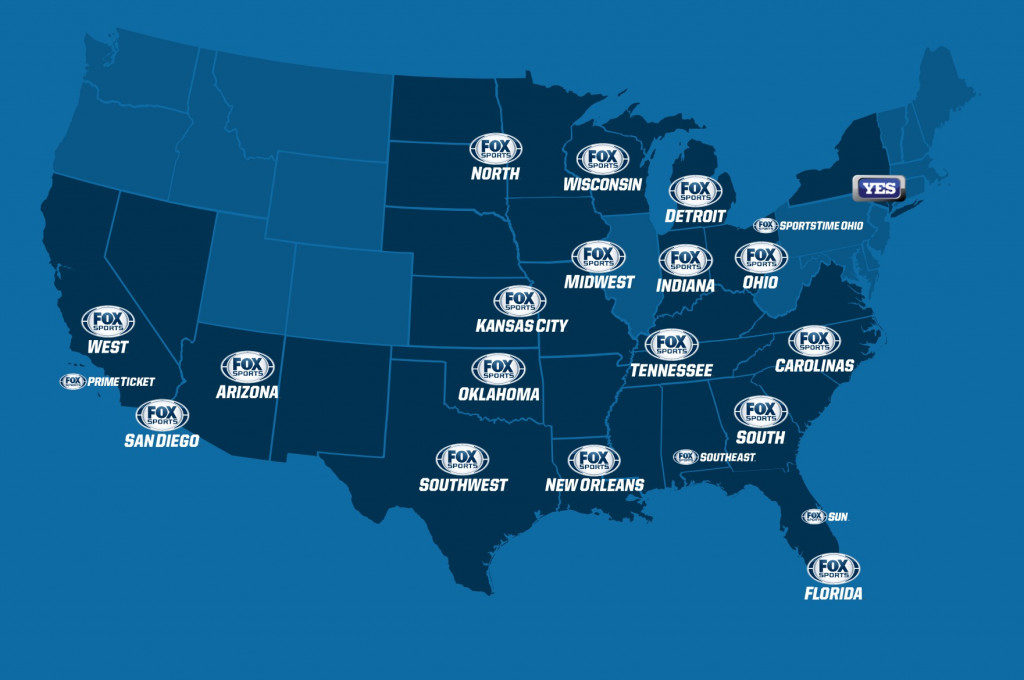 I understand most of these moves, and they make more sense when looking at the culture and history of Fox Sports. Be first. Win big. If not, wait for the next big thing. Why compete in an area if you’ll squeak out a small profit or barely break even? Let the others battle it out instead of chasing crumbs, and be first and win big on the next thing.

That’s all great, but Fox has retreated or passed on so many opportunities at this point that it makes a venture like becoming the market leader in a field as potentially lucrative as sports betting significantly more difficult for them. Almost everything Fox does is inherently more difficult because for most, there just isn’t much of a strong connection with the Fox Sports brand outside of live rights.

Fox’s road to success with their betting investment would much easier if they had an ongoing presence in the lives of sports fans outside of live games. Without original online content, fantasy sports, or an OTT app, Fox just doesn’t have much of a foothold in the digital lives of sports fans and are is now reemerging like a deadbeat parent when their kid is about to get drafted in the first round.

That said, I still like Fox’s investment. Mobile sports betting will continue to grow as more states legalize sports betting. Many will opt to use Fox Bet instead of another app that doesn’t have a brand they are familiar or comfortable with. However, Fox’s narrowed focus significantly undercuts both the size of the audience and the familiarity with the existing Fox Sports digital user base. In many ways, Fox reminds me of a football team that doesn’t want to run the ball because it’s not sexy. Yes, passing plays net more yards, but they’re more likely to cause a turnover and you often find yourself in third and long situations. Moving the chains with three yards and a cloud of dust isn’t sexy, but it’s a strategy that cannot be completely shunned. While I applaud Fox’s ambition and efforts, their ambivalence towards so many core components of the digital sports fan experience is a significant detriment for any big bet they have made or will make in the future.