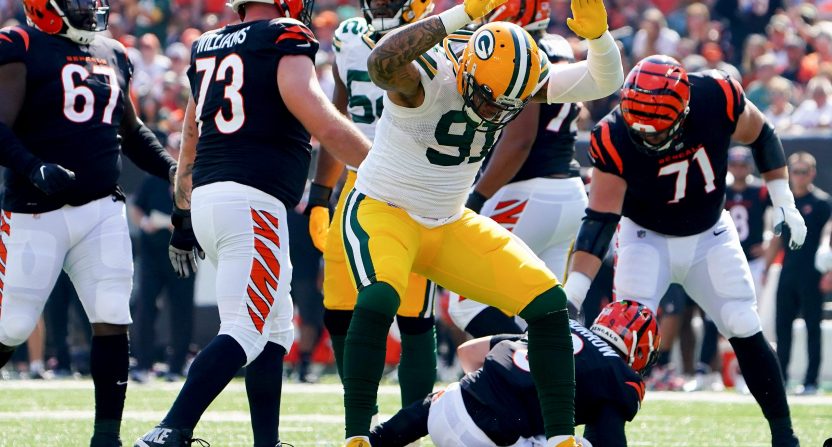 It’s been a wild Sunday in the NFL in terms of missed kicks. We saw six missed extra points across the league and, over in the game between the Green Bay Packers and Cincinnati Bengals, we saw Packers kicker Mason Crosby miss three field goals while Bengals kicker Evan McPherson mistakenly thought a game-winning field goal went through and started celebrating, only to find out that he’d, in fact, missed.

The last six drives that have taken place in Packers-Bengals ? pic.twitter.com/gKMFYwvuK2

So when Crosby lined up to kick a 49-yard field goal in overtime to win the game, you better believe Packers fans and NFL viewers were glued to their televisions to see how this drama would play out.

Only….many of them wouldn’t get the chance. Fox affiliates around the country apparently cut away from the broadcast right before the game-winning kick (which he made) in order to go to…commercial.

Why did my local Fox station leave the Green Bay-Cincinnati game before Mason Crosby’s kick???
Shades of the Heidi game.

Umm, FOX in my market cut away from the Bengals Packers game right before the game winning FG. To show commercials.

It doesn’t appear that this happened to all Fox viewers, just ones in select markets. It appears that the affected markets were the ones that are supposed to get one of the afternoon games such as the Dallas Cowboys vs. New York Giants. Some markets saw the broadcast return to watch the field goal before leaving that game behind for good. And to be fair, it’s not anything new, it’s just that people noticed it this time because it came as a critical moment right at the end of the game.

Home and secondary markets are switched to the late game as soon as coverage starts, per longstanding NFL rules. (This happened last week on CBS. Those who got switched to Packers/Steelers watched the whole 1st quarter without a commercial as the Jets game went deep into OT)

DAL and NY markets promised entire game under Nfl rules right? Stupid, but not new and not complicated.

A good solution for avoiding this might be for fans to sign up for NFL Sunday Ticket, except that, well, that wouldn’t have helped.

Eh, it's fine. NFL is background music for me on Sundays.

Sometimes it's secondary background to my FBC podcast routine. https://t.co/mnclpA3mi8

You’d think that the NFL and its broadcasting partners could figure out a way to not shock viewers like this by now, but, here we are. While some think that fans should know this going in, that might also be a bit much to ask of people who expect to be able to watch the game they’ve been promised, regardless of how long it runs. Just a good reminder to note the game that follows the one you’re watching, just in case it runs long and you’re going to be invested. You might want to have a backup viewing plan handy for the ending.