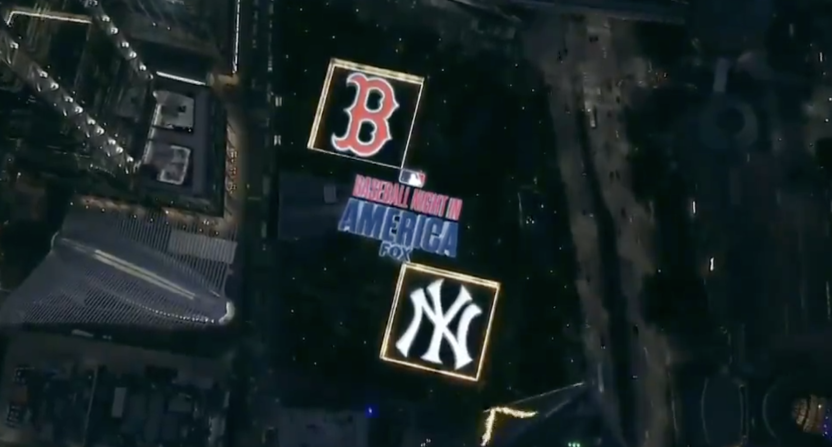 If you were alive during the events of September 11th, 2001, you’re well aware of the significance of the grounds where the Twin Towers once stood. And frankly, even if you were born afterward, you’re almost certainly aware of the reverence deserving of that site.

Turns out, however, that not everyone sees the 9/11 Memorial and thinks “hallowed ground.” At least one person at Fox saw it and thought the pools within the memorial were the perfect empty canvas to drop some graphics on during the Baseball Night in America game between the New York Yankees and Boston Red Sox.

And oh boy, did people notice.

Hey @FOXSports — please tell us you didn’t do this to the #WorldTradeCenter memorial. pic.twitter.com/4RmUlrZVJ8

The pools where the MLB team logos were superimposed are known as Reflecting Absence, twin waterfall pools surrounded by bronze parapets that list the names of the victims of the 9/11 attacks and the 1993 World Trade Center bombing. Anyone who has visited the site knows the sobering, reverential feeling that they evoke.

For the out of towners: pic.twitter.com/uF1ByRxklH

Now, it stands to reason that this wasn’t a purposeful mocking of the 9/11 Memorial and was instead a boneheaded screw-up from someone who didn’t put two-and-two together. At least we can hope. While many were left asking “what is wrong with Fox?” it’s pretty hard to imagine they, of all companies, would want to disrespect that site.

Still, even as a mistake or poor decision, that’s an egregiously bad one to make, and reactions were swift and harsh.

Fox Sports putting team logos in the reflecting pools at the 9/11 memorial. ?‍♂️

Of all the NYC aerial shots Fox Sports could have used, they decided to superimpose their baseball logo over the 9/11 Memorial?

I am calling for total graphic creation shutdown until we figure out what the hell is going on pic.twitter.com/nlICTJDFI2

The most offensive thing is that they did this during a game in which Nick Castellanos isn't even playing https://t.co/XlQtBlgCi4

We’ll have to wait and see if Fox issues any kind of statement or apology for the distasteful placement of the graphics and we’ll update accordingly when they do.

Update: In response to the backlash, a spokesperson for Fox Sports issued the following statement to the Daily Beast:

“During tonight’s telecast, we used poor judgement on the use of a graphic. We sincerely apologize and regret the decision.”