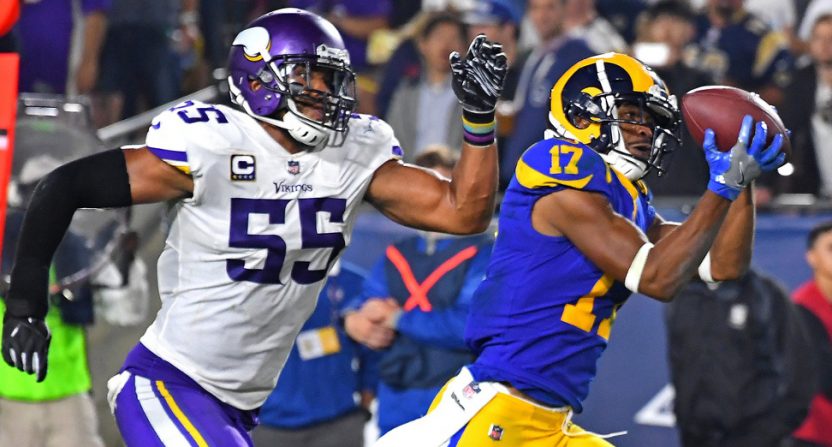 An important part of the conversation around sports TV ratings in 2018 is how the rest of TV is doing (as Robert Kraft really, really wants you to know), and the answer is…not great. Last week marked the first official week of the fall TV season, and as per Vulture’s Josef Adalian, it went pretty well for NBC and Fox, but not for CBS and ABC. The NFL was a big part of the equation on both sides:

We'll have actual numbers shortly, but early projections have ABC and CBS both falling about 25% year-to-year in A18-49, with ABC falling to fourth and NBC in first. CBS can blame loss of football. ABC? It's just tanking. Details:https://t.co/gYoB7CT9wB

Adalian’s full piece is well worth a read, especially for the details on how each network performed year-over-year:

Final numbers (including DVR replays) for premiere week aren’t in yet, but the early projections from one network research source suggest CBS and ABC will end up down about 25 percent among adults under 50 versus 2017 levels, with NBC flat or down just a tick and Fox jumping a massive 70 percent year-to-year. Much of Fox’s turnaround can be attributed to its purchase of Thursday Night Football rights, which allowed it to quadruple its year-ago ratings on the night. But Fox can also brag about its big Friday gains and the successful relaunch of Mondays (which now feature The Resident and 9-1-1). It’s also probably no coincidence that the other network not losing ground this fall, NBC, also has a prime-time pigskin showcase in Sunday Night Football.

That growth for Fox is particularly notable, as they were previously last in adults 18-49 amongst the big four networks. A whole lot of that comes from Thursday Night Football‘s debut on Fox with the Vikings-Rams clash, which saw the network pull in a massive 10.1 overnight rating. That’s huge compared to the rest of broadcast TV, and it even was an eight percent jump over the Bears-Packers Week 4 Thursday Night Football game a year ago on CBS.

Now, one week does not a season make, and while Fox and their ad agency will tell you about how great their matchups are, it’s far from certain that every week will see growth. However, even down Thursday Night Football games are still often dominant compared to most of the rest of TV, and that’s why Fox paid $3 billion over five years for that package and based its “New Fox” strategy around it, part of the plan of selling off their TV studio (and a whole lot else) to Disney and mostly focusing on sports and reality programming. (They do still have some scripted stuff, though, and as Adalian notes, Last Man Standing, The Cool Kids, The Resident, and 9-1-1 all performed for them in Week 1. Some of that was about promotion of those shows, Last Man Standing in particular, during TNF.)

It’s also interesting that ABC fell so hard, as they did get great ratings Saturday for their college football slate. It’s the rest of their programming that’s really underperforming, including Dancing With the Stars (the Monday edition was down 36 percent year over year), The Good Doctor (down about a third from last year’s premiere), and A Million Little Things (7.9 million same-day viewers for its premiere, but that’s 2 million less than the since-cancelled and revived at Netflix Designated Survivor drew for its second-season premiere last year). So, yeah, their non-sports slate is not in good shape.

Of course, it’s far too early to conclude that the “New Fox” strategy is going to be successful long-term (especially pondering what their schedule will look like after the NFL season ends), and it’s also too early to conclude that even the Thursday Night Football deal is worth the money they’re paying. Yes, Fox is likely to win the night for the foreseeable future every time they air TNF, even if a particular matchup turns into a dud, but just how good those ratings wind up being will be important, especially considering that they’re spending way more just for the rights to that programming than any other network is spending on scripted or reality shows of similar duration. Similarly, CBS and NBC won’t get a TNF boost this year, but they’re saving substantial money by not paying for that.

But these network ratings are interesting. They provide further evidence that sports (the NFL in particular) is hanging in there much better than most other programming, and also suggest that Fox (which wasn’t doing so well with the old approach, especially in adults 18-49)’s shift towards sports might have some merit, even with its significant pricetag. We’ll see if that story continues as the TV season progresses.