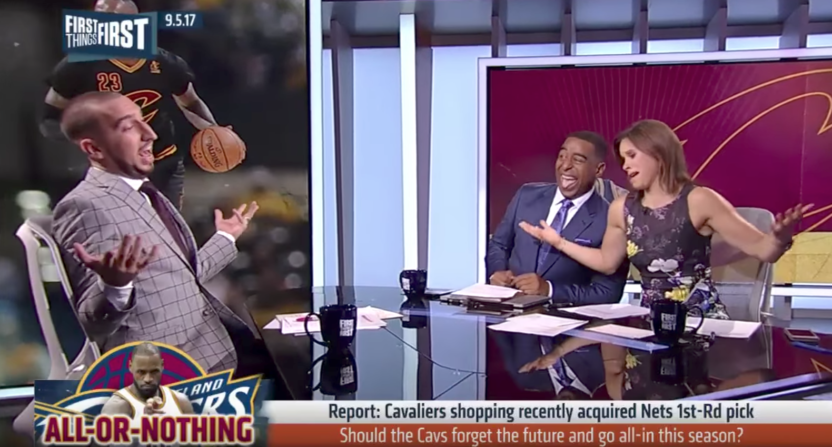 At first glance, FS1’s First Things First seems like it may be a bit much to take on in the early morning hours before work and during breakfast. Three hours of sports debate TV? That’s a lot of debate to embrace.

However, three hours isn’t an outrageous length of time for a sports morning show. Mike & Mike goes four hours, while Good Morning Football and MLB Central (albeit at a later hour) are on for three. Outside of sports, Good Morning America and the TODAY show go for two hours (though TODAY returns for one hour at 10 a.m.). But three hours is pretty standard in cable news. Fox News’ Fox & Friends, MSNBC’s Morning Joe and CNN’s New Day go from 6 a.m. to 9 a.m. every weekday morning.

Those latter two shows definitely embrace debate early in the morning. Watch CNN’s Chris Cuomo practically tap his gloves together every time someone from the Trump administration like Kellyanne Conway or the recently fired Sebastian Gorka is a guest on the program. And if anyone disagrees with Joe Scarborough on MSNBC, the tension level increases. So there is definitely a place for debate on morning TV.

Yet here’s one takeaway after First Things First debut on Monday morning. There wasn’t a whole lot of debate to embrace. Nick Wright and Cris Carter weren’t shouting at each other and trying to talk over one another. Neither personality took himself so seriously as to assume a defensive stance whenever an opinion was challenged. Host Jenna Wolfe didn’t have to meekly interject to go to a commercial break. Maybe that will come in future shows, especially if one or the other gets particularly worked up on a topic.

In light of Edelman’s injury, @getnickwright says there is real uncertainty for the Pats as they face a fully stacked Steelers team in AFC pic.twitter.com/svo74qMmAo

For the most part, these guys were having a conversation in which they focused on their areas of interest or expertise. If you didn’t know Carter was a former NFL player, he certainly made it known several times that he was a professional athlete. And that’s fine because that background gives him credibility. Wright countered nicely with his own opinions, often using statistics and memories of past events to make his points. He’s also a natural talker, coming from radio, and brings personality to the exchange, often with a funny quip that makes sure no one is taking himself too seriously.

Wright and Carter showed entertaining chemistry and potential for more enjoyable banter to come while talking about Aaron Rodgers fixing Sam Dekker’s sink over the weekend. Carter portrayed this as a basic skill that every man should have in life, while Wright had no problem admitting that he’s not a handyman and helps stimulate the economy for paying for such services. Wright even asked if Carter had hit hard times with investments if he didn’t have the cash to pay a plumber. This is when the show was at its best.

“Beckham is not a problem, he’s the solution.” —@getnickwright on if OBJ is a distraction for NYG. @MichaelVick & @criscarter80 weigh in pic.twitter.com/cR5rnsVXF6

Host Jenna Wolfe is a welcome presence in the dialogue as well, providing another voice in addition to some opinionated questions (such as whether or not Odell Beckham Jr. was too much of a distraction for a New York Giants team that should contend for the NFC East title). Wolfe’s experience in hosting morning TV with several people at the desk was notable in guiding the conversation and interjecting something that kept the discussion fresh.

She also brings some entertaining personality to the show itself. Maybe the funniest example of that was when Wolfe mentioned that her mother texted her to say “Great show! Get ’em again tomorrow!” at the beginning of the 7 o’clock hour, apparently thinking that the show only ran from 6:30 a.m. to 7 a.m. “It’s a three-hour show, Mom!” Wolfe said.

“If Cam is ever going to be MVP again, it’s because he utilizes the talent around him and only runs when he’s forced.” — @criscarter80 pic.twitter.com/nqy45n7APv

First Things First also brought in Mark Schlereth and Michael Vick to discuss the pertinent topics going into Week 1 of the NFL season. At times, the former athletes at the desk ganged up a bit on Wright, bringing their playing days to the table and seemingly trying to marginalize layman opinions. That could get kind of old if it happens too often.

Viewers surely appreciate having perspective from those who played the game, but Wright represents the regular fan (albeit a very knowledgable one), asking questions and making observations that many of us have on certain stories or in response to what happened on the field. Hopefully, Carter and the many ex-player analysts that FS1 employs won’t lean too much on “I played the game” and lend insight in response to what Wright (or Wolfe) is saying, helping viewers to understand why things happen or what an athlete might be thinking in certain situations.

If there’s one gripe with the debut episode of First Things First, it’s that the show hardly discussed college football coming off the first full weekend of the season. Not one word was mentioned about Alabama-Florida State or UCLA’s amazing comeback over Texas A&M (which was broadcast on Fox). College football wasn’t even referenced until more than an hour into the program when a one-handed catch by Kansas receiver Chase Harrell made the highlight reel for the “Hall of Fame Hands” segment in which Carter will grade a highlight-worthy snag.

Maybe the opening show was playing to Carter’s strengths and the NFL is obviously the king of the major sports, gobbling up most of the headlines. But it seemed a bit strange for First Things First to virtually ignore what most sports fans were likely watching throughout the holiday weekend, taking up prime time real estate for the past five nights. Even the NBA got some attention, discussing reports that the Cleveland Cavaliers want to trade the first-round pick they received from the Brooklyn Nets and whether or not the team should go all-in to appease LeBron before he possibly leaves in free agency.

If you were expecting another three hours of sports debate, and the shouting and chest-thumping that comes with it, First Things First was a pleasant surprise with its premiere episode. Wright and Carter make a good on-air team, and Wolfe fits into the mix well. The two aren’t afraid to tease each other, which makes for some entertaining interplay and good quotes, and complement each other well. Hopefully, the two become even more comfortable and evolve beyond “pundit vs. athlete.”

Few people will likely watch the entire three-hour program, and the show realizes that by resetting, returning back to topics and segments later on in the show. But if you need some sports talk in the morning (personally, I like a bit of news and weather in my morning regimen), First Things First gets right to it without too much opening chit-chat.

It’s certainly something to have on while getting ready for the day, working out, or having on while working at home. And it’s nice not to have the shouting. Hopefully, the discussion topics are a bit more timely with what happened the night before in the future and doesn’t focus almost entirely on the NFL in future episodes. This could be the best studio show FS1 has in its lineup.