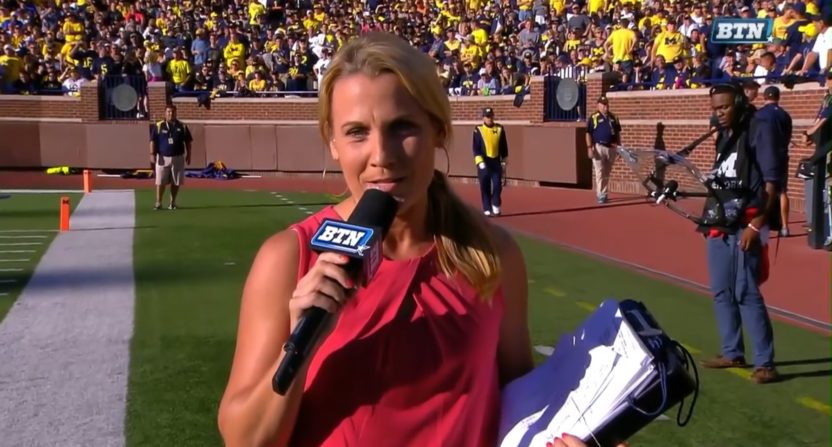 The last couple of years have seen significant growth in the prominence of female announcers and analysts on U.S. sports TV broadcasts, from Beth Mowins calling national NFL games for ESPN and CBS to Jessica Mendoza as a regular ESPN Sunday Night Baseball analyst to AJ Mleckzo’s work as an analyst on NBC’s Olympic and NHL hockey coverage to Doris Burke’s increased role as a NBA game analyst for ESPN to Aly Wagner’s work as a World Cup analyst for Fox. Now, Fox Sports is doing something interesting, having an all-female on-air team for this coming Sunday’s D.C. United-New England Revolution MLS clash (7:30 p.m. Eastern on FS1), with Lisa Byington doing play-by-play alongside analyst Danielle Slaton and reporter Katie Witham. Richard Deitsch of The Athletic notes that this is “the first time an all-female booth will call an English-speaking broadcast of a men’s professional soccer match on a national sports network.”

Both Slaton and Witham are well-known in the MLS world. Slaton had a successful playing career with Santa Clara University and then with the U.S. national team, the Carolina Courage and Olympique Lyonnais, did some coaching and then went into broadcasting, starting as a soccer analyst with the Big Ten Network in 2010. She’s also done plenty of soccer for Fox (including the 2015 Women’s World Cup alongside John Strong) and has served as a sideline analyst for local MLS broadcasts with both the Chicago Fire and San Jose Earthquakes. Witham joined Fox in January 2017 as a sideline reporter and host for their MLS coverage; she’d previously worked on soccer coverage at ESPN and with the Columbus Crew, and had other reporting experience with BTN, Fox Sports South and the Cleveland Indians, and she has a soccer playing background as well, serving as the co-captain of Capital University’s team.

Byington (seen above doing college football work for BTN) will be less familiar to some MLS fans, but she’s an experienced play-by-play voice. She’s called college soccer and NWSL games, and played soccer at the NCAA level with Northwestern for two years (she was a dual-sport athlete there, also playing four years of basketball). She’ll also be calling college football for BTN this fall, and will be calling men’s and women’s basketball for FS1 as well as serving as a reporter on some Fox men’s basketball broadcasts.

While there have been many women in prominent sports broadcasting roles recently, an all-female on-air team is still a relatively-new frontier. It’s happened with some college basketball broadcasts, including Mowins and Burke calling a DePaul-Providence men’s basketball game in 2011 and Mowins and Kara Lawson calling a package of West Coast Conference games in 2013, but it’s not something that’s been seen in men’s U.S. soccer coverage. Or in many other sports, for that matter. And it’s interesting to see Byington part of making history here, as in 2015, she and Brooke Weisbrod were the WNBA’s only full-time all-female on-air broadcast team, but were cut in favor of two men.

But Byington told Deitsch that while “It’s actually unfortunate to me that this opportunity has taken so long to happen,” she agreed to do this not because of the all-female team, but because of the chance to work with respected figures like Slaton and Witham and the chance to expand her play-by-play horizons to a different league. And she summed it up by saying she wants to “push forward the attitude that a good broadcast is not gender-based, but information and performance-based,” and “frankly, I hope we are getting closer to the point where a moment like Sunday really won’t feel that significant.” Maybe that will be the case some day. For now, though, this is a notable deviation from the norm.