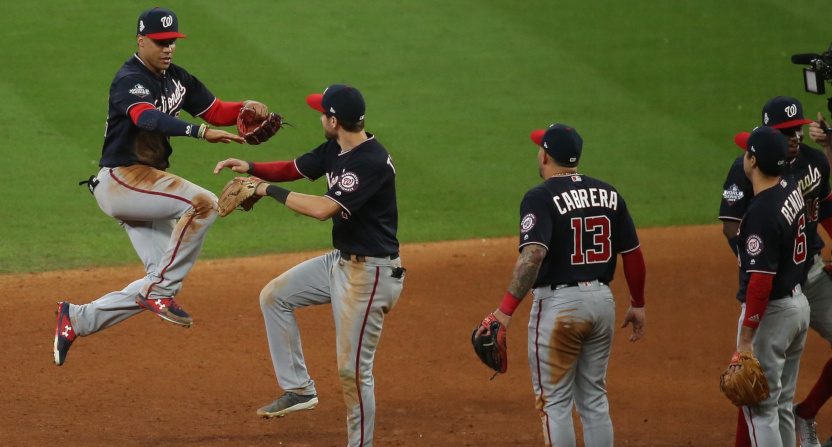 The ratings are in for Tuesday’s Game 1 of the World Series between the Washington Nationals and Houston Astros, and they don’t seem great for Fox. As per Rick Porter of The Hollywood Reporter, the final viewership for Game 1 dropped 11 percent year-over-year and matched a five-year low:

The first game of the World Series delivered a ratings win for Fox on Tuesday, but it fell short of last year’s opener. Regular programming on other networks was mostly unaffected, with NBC’s This Is Us and several other shows actually improving week to week.

As per Sports TV Ratings’ Robert Seidman, the final number here was 12.194 million, which puts it barely ahead of the all-time low (since 1972) of 12.191 million for Game 1 of the San Francisco Giants-Kansas City Royals series in 2014 and behind the previous next-lowest number, the 12.243 million for Game 1 of the Giants’ series against the Detroit Tigers in 2012. However, this one seemed like it would have an edge over 2014 from a market standpoint; the Nationals and Astros play in the sixth and seventh-largest U.S. markets as per Nielsen, while the Giants are in the eighth-largest and the Royals are in the 32nd-largest.

There are some potential disclaimers with the Nationals (a lot of people who live in D.C. are from other areas and are fans of other teams) and Astros (they had some poor TV ratings years ago thanks to the CSN Houston debacle), but those are maybe less notable than the Giants sharing a market with another team entirely (the Oakland A’s). So this wasn’t an easy-to-predict drop from a market standpoint, and many of the predictions compiled by Douglas Pucci at Programming Insider had this series being close to or even surpassing last year’s Red Sox-Dodgers numbers. It could still do that over the entire series, of course, but it’s not off to a good start there.

MLB’s other ratings numbers this year also don’t necessarily explain the drop. This year’s All-Star Game drew a record-low overnight rating, and the local ratings declined by four percent mid-season, but they were down just one percent by the end of the year. And TBS, Fox and ESPN all saw some national increases this year. So it’s not an obvious “baseball ratings are all down, so this is down too” story.

Of course, there was some significant competition Tuesday night from the NBA’s season-opening TNT doubleheader (Pelicans-Raptors and Lakers-Clippers). Those games drew 2.251 million (U.S. only; it actually drew 2.6 million in Canada, remarkable considering that Canada has just over 11 percent of the population of the U.S.) and 3.583 million viewers respectively. Those aren’t huge numbers relative to what the World Series pulled in, but they’re decent (especially considering that the first game had only one local U.S. market and that the second one was up over last year’s 2.717 million for Thunder-Warriors), and that’s a reasonable amount of potential sports viewers who were watching something else.

In any case, it should be noted (as Ad Age‘s Anthony Crupi outlined very well in his comments for Pucci’s ratings predictions) that even down sports ratings are still a big win considering the dismal performance of much of the rest of network television, especially when it comes to ratings in the 18-49 demo. And Fox handily won the night here, and while these ratings stack up with some of the worst World Series numbers on record, they’re at least not dropping below those at this point. But we’ll see how the rest of the series goes from a ratings standpoint.