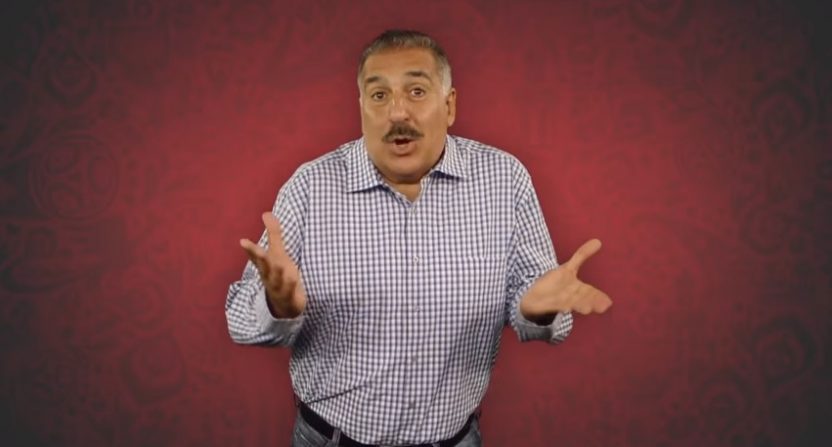 The 57-year old energetic, eccentric Argentine Fox Sports soccer personality will host World Cup Tonight throughout the tournament, airing nightly on FS1 beginning next week. It will be the 8th World Cup he’s covering, but his first in English for Fox after spending 25 years and seven World Cups working at Univision.

In those 30 years on television, Fiore said he always wanted to provide a different approach than other TV personalities or analysts.

“For me from the very beginning, even when sports on TV or in broadcasting was very serious, very detailed, very analytic and very numbers-oriented, for me it was entertainment,” Fiore told Awful Announcing last week in New York. “For me, it was fun. I took that approach.”

Fiore — or El Presidente, as he’s called— said he respects and loves all his hard-working colleagues that know every single player, coach, and tactic. “But I was approaching sports as entertainment,” he said, noting that his approach began when he first started working on TV in 1988. “I was looking for something else.”

“And I love the people who still are in the serious side of business, and the people whose analysis are the most important thing,” Fiore said. “But we have so many of those [among] my colleagues. When I joined Fox, they told me you don’t come here to try to outdo the analytics of the other people, and I didn’t want to do that. They brought me up for what I was doing in Spanish, and it seems like it worked.”

Fiore is also grateful that Fox hired him in 2015, three years before the network broadcast its first World Cup. Because if not for that time for Fiore and the network to have a couple of proverbial dress rehearsals under his belt, and for an English-speaking American television audience to get to know him, his transition would’ve been far from ideal.

“If I would’ve started from [now] to the World Cup, the situation would have been much abrupt,” he said.

After three years, “I go in New York and people stop me who don’t speak any words in Spanish and go ‘Fernando Fiore! Ohh, I love your style!’” he said. “So it’s already a buildup.”

He’s very happy that non-Spanish speaking people have embraced him so well over the last three years.

But for the people who doubt or question Fiore’s knowledge of the game because he’s more about entertaining the audience, Fiore came out quite strongly in his own defense.

“Do you want me to sit down and talk about the seven World Cups I’ve been to or the hundreds of stadiums around the world that I’ve been to, all the games that I’ve seen every single tournament?” Fiore asked. “I can talk to you about that. I can be serious and talk to you about that for hours and hours. And let’s see how many people can keep up with me in the conversation.”

Fox will have numerous analysts and former players to break down the nuances, player matchups and tactical choices. Fiore’s job will be to bring a sense of balance and lightness to the broadcasts, trying to cater to both the hardcore soccer fan and the casual American who only watches once every four years.

Transitioning from broadcasting in Spanish for Univision to Spanish and English for Fox took some time, but Fiore was thankful that he got respect and love from the network.

“Thank god it’s a trendy thing and people love accents,” he said. “You might say my English might not be so perfect, so be it. This is something I’ve been trying to do better every single day of my life, but I’m not going to change my accent or my attitude.”

Two summers ago, Fox began its coverage of Copa America from its studios in Los Angeles but eventually took their show on the road to various host stadiums across the United States. In his major debut for the network, Fiore said the responses from fans who came up to him were mainly positive.

“We love the way you fight with [Alexi] Lalas and the crazy things you do,” Fiore said the fans told him. But there were also people who reacted negative towards him and called his behavior clownish. This was his response, he said.

“Hey dude, I like to be a clown also because this is entertainment,” Fiore said. “And I’m not ashamed of it.”