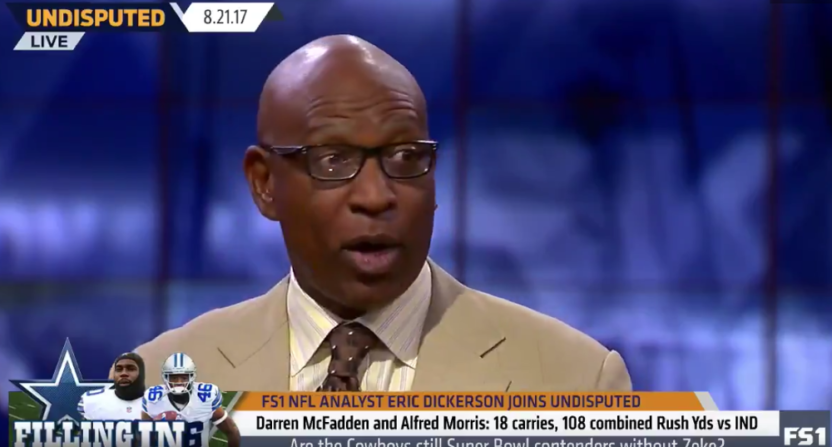 FS1 NFL analyst and Pro Football Hall of Famer Eric Dickerson has been in the news this week for his role with a letter that demanded better health insurance and benefits for Hall of Famers (or all retired players, as he’s since tried to shift the focus to), a letter signed by 22 Hall of Famers and the widow of a deceased Hall of Famer that threatened boycotts of future Hall of Fame ceremonies, and a letter that a couple of the signatories (Jerry Rice and Kurt Warner) distanced themselves from within hours.

He’s becoming quite a flashpoint of NFL criticism, even saying “I hate them fuckers” in a Deadspin interview published Friday. But the most notable part of that interview may be Dickerson’s response to a question about if he’s worried this might impact his job with Fox.

First, some background. Dickerson has been making the media rounds to talk about this letter  (and also arguing with reporters on Twitter over what exactly the group’s goals are and if he did or didn’t cross a picket line in the 1987 strike), appearing on ESPN’s Golic and Wingo Wednesday, showing up on Outside The Lines after that, and speaking to Deadspin’s Dom Cosentino Wednesday night for that piece published Friday. That whole piece is worth reading for Dickerson’s various discussions of the 1987 strike, his thoughts on NFLPA leadership past and present (far from favorable), and his comments on how Warner and Rice were mistakenly added to the signatories on the letter, but the most interesting part may be how bold Dickerson gets with his NFL criticism (in relaying a story about his comments to a woman from the league office who asked him and other former players for their thoughts on the league), and how unconcerned he is about that possibly impacting his work as a FS1 NFL analyst.

First, the quote on the NFL:

“I said, ‘I’ll say this much here: The NFL was good to me; I’ve been able to do things for my mother that I never would have been able to do.’ But as far as the NFL, I said, ‘I hate them fuckers. I hate them. I loved the game so much and they made me hate it at the end.’”

She was, like, ‘Really?’ I said, ‘Most players feel like this.’ I said, ‘They say this ‘We’re family’ crap and I say that’s bullshit. We’re not no family.’

And next, the piece-ending exchange on implications for his job status:

You still work at FS1? With all that you’re saying, are you worried about your job there, considering their parent company (Fox) is one of the league’s broadcast partners?

Nah. I’m not worried. You heard me say it before: I’m loyal. I’m loyal to this fight, and if they do that, then we know why.

That’s a bold stance from Dickerson, and it will be interesting to see if anyone at Fox or the NFL is concerned about it. We’ve heard over and over again about the NFL’s complaints about critical coverage and comments from ESPN, and about new president Jimmy Pitaro’s efforts to try and keep the league happy. We’ve heard relatively little about NFL complaints against their other broadcast partners. Some of that’s because those other networks aren’t exactly investing in investigative journalism that really digs into the NFL (ESPN doing that has been a focus of many of the league complaints), but some of it’s because there haven’t often been personalities on those networks strongly criticizing the league.

In fact, FS1 may be the media outlet that’s been most supportive of the NFL’s continued non-employment of Colin Kaepernick, especially when it comes to Jason Whitlock (even if his barbecue sketch with Kid from Kid N’ Play never made it to air). Whitlock’s also said football’s consequences are “yachts,” a distinct counterpoint to, say, ESPN’s reporting on CTE. Oh, and Ray Lewis has had plenty of negative things to say about Kaepernick too. Of course, those are just two of the many people who talk about the NFL on Fox and FS1, but the majority of Fox’s NFL coverage has been focused on on-field matters, and hasn’t usually been too critical of the league. So it’s somewhat new ground to hear a FS1 NFL analyst blasting the league so vehemently and profanely.

However, this may not lead to any discipline for Dickerson, especially if the NFL’s smart about it. While the league undoubtedly isn’t happy to hear about this, trying to push for punishment here would likely lead to even worse publicity for them, especially if their connection to it came out. And Dickerson’s status as a Hall of Fame player maybe gives him some leverage that others don’t have; even a move like ESPN suspending Jemele Hill for tweets suggesting a boycott of Cowboys’ advertisers (which was problematic enough in its own right) still seems easier to sell to the public than disciplinary action from Fox here, which would get them a whole lot of criticism for caving in to the league.

But it all depends on how upset the NFL gets and how worried Fox is about that. The NFL is an absolutely vital partner for Fox, especially with the “New Fox” sports-focused strategy and the Thursday Night Football deal, and if NFL suits do get particularly upset over this and demand a suspension or a parting of the ways with Dickerson, it seems likely that Fox would still appease them. And it’s notable that Dickerson is only one of many FS1 NFL analysts, that there are a ton of ex-players out there looking for TV work, and that Dickerson isn’t even a regular cast member of a particular NFL show; he just shows up on their various studio programming. It’s certainly possible that they could reduce his appearances or stop them altogether.

The smartest move for the NFL and Fox would seem to just let this blow over and not give Dickerson’s comments further traction still by handing him discipline, but the NFL doesn’t always make the smartest move. We’ll see what happens here. At any rate, it’s certainly notable to see a FS1 analyst blast the NFL this way.