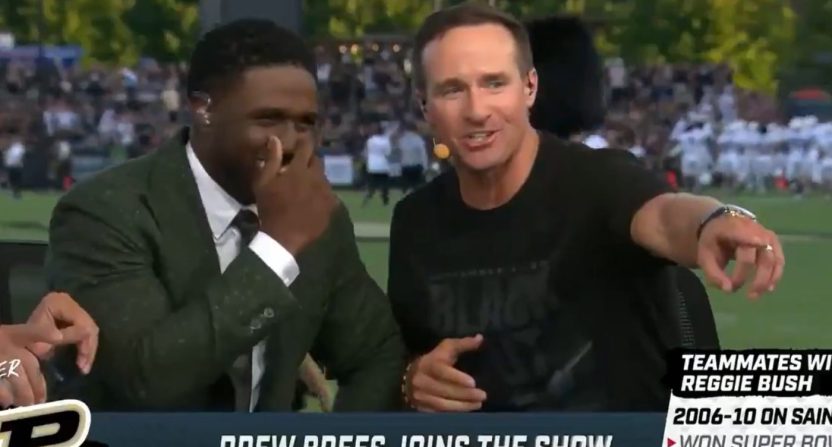 With everyone down on Drew Brees’ broadcasting chops after one disappointing season with NBC, the future Hall-of-Famer went on Fox Thursday night and reminded the world that he does have a personality.

"You took it like a champ"@ReggieBush HAD to bring this up with @drewbrees in the building ?? pic.twitter.com/H0kSZHtUcY

The former New Orleans Saints quarterback joined NBC last year with expectations of being the next Tony Romo. Instead, Brees and NBC abruptly parted ways following just one season, with the experiment resembling more Jason Witten than Romo.

Brees was OK calling Notre Dame football on Saturday afternoons, and he was serviceable as part of NBC’s Football Night in America studio show. But Brees will infamously be remembered for his disastrous performance as an analyst during the Las Vegas Raiders–Cincinnati Bengals playoff game, which reinforced the fact that he wasn’t ready to for the big stage as a broadcaster. Fans soured on Brees’ ability as an analyst, questioning what NBC saw in him beyond his name. And ultimately, NBC soured on Brees as well, with the network and former quarterback both agreeing to part ways after one disappointing season.

But Thursday night on Fox, we may have received a glimpse of what NBC previously saw in Brees when they hired him straight off the football field. Brees portrayed so much enthusiasm on this Fox pregame show that he made Romo sound like Mr. Rogers. And usually, when a person goes from mundane to fervently excited, it might come across as disingenuous, but the enthusiasm that exuded from Brees felt authentic.

Maybe sitting next to a former teammate drew the passion out of Brees, maybe it was eliminating the pressure of high expectations, or maybe it was just the aura of Urban Meyer. Whatever it was, Thursday night may have been Brees’ best possible audition for his next opportunity in the media and attempt to “be one of the very best” broadcasters. Assuming he doesn’t decide to go back to quarterbacking first.