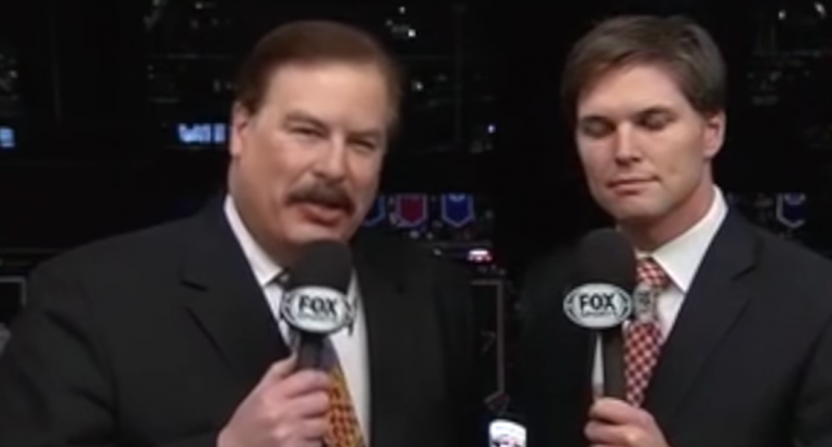 Here’s one that really makes you shake your head. Fox Sports North play-by-play announcer Doug McLeod was replaced in the broadcast booth after saying “all the White Bear fans get out the lynching ropes” during the first game of the Minnesota Boys’ State Hockey Tournament quarterfinals on Thursday. He was scheduled to call a second game yesterday, but was replaced Charlie Beattie, the sideline reporter who many lauded for his call of a triple overtime game.

I'm guessing this is probably what got Doug McLeod pulled from the broadcast this afternoon. Yikes. pic.twitter.com/l6luIKYQBM

The Star Tribune reports that while the comment was initially not reacted to by McLeod’s broadcast partner, the following statement was offered up during an intermission by 45TV studio host Tom Hauser after the clip began to circulate on Twitter.

“Earlier in this broadcast this afternoon, there was an inappropriate comment made,” Hauser said. “If you were offended by this comment, we sincerely apologize.”

The comment came shortly after Blaine took a 3-0 lead early in the second period. Blaine would go on to win 4-2 to advance to the semifinals.

Wow. Doug McLeod out. Did he jeopardize his Gophers gig too?

While the Minnesota Boys’ State Hockey Tournament may sound like a pretty low level event, it’s a big deal in Minnesota. It regularly sells out the Xcel Energy Center and the games do attract a considerable audience on television.

McLeod’s main gig is the Minnesota Gophers’ play-by-play announcer for Fox Sports North. Gopher hockey has, or at least used to have,  a pretty sizable following in Minnesota.   (Update: While the Gophers do play on Fox Sports North tonight, tomorrow, and possibly Sunday, those games are being produced by Big Ten Network and we’re now told McLeod was not actually scheduled to do those games.)

Thrilled to be calling games at the MN High School Hockey Tournament again. It’s been way too long. I have two AA tilts starting Thursday at 11:00 AM Central on TV-45.

45TV airs a lot of high school sports and usually mixes in local TV talent like McLeod, along with various radio voices. The on-air talent and production team are usually a lot of experienced freelancers, most of whom are not actual employees of 45TV. It also should be noted McLeod is not an employee of 45TV.

We live in an era where many stories result in heated debate between folks outraged about comments deemed insensitive vs. those who think PC culture has gone too far. ESPN announcer Doug Adler just rejoined ESPN after he sued the network because he was terminated for making comments about Serena Williams that some interpreted as racist. A similar situation just unfolded with Iowa basketball announcer Gary Dolphin.

With that said, I’m really struggling to wrap my head around McLeod’s comments. I don’t know McLeod or his track record, so I can’t give much context for how unique or out of character this may have been for him, but the comment itself is pretty squarely and brazenly racially insensitive. I imagine he knows that and will release a very sincere apology, and just chop it up to saying something really dumb without much thought or intent.

Will that be enough to get him back on the air? That’s hard to say, given I don’t know the quality of his work or his background. This does seem to come at a time where there will be a lull of no regular season Gophers hockey games to call for eight months. That probably works in his favor, should Fox Sports North decide to bring him back. In the meantime, this is up there as one of the worst announcing flubs we’ve heard.

“We are aware of the insensitive remarks, and while this didn’t occur on our air, we have zero tolerance for these comments. We are addressing the matter and have no further comment at this time.”