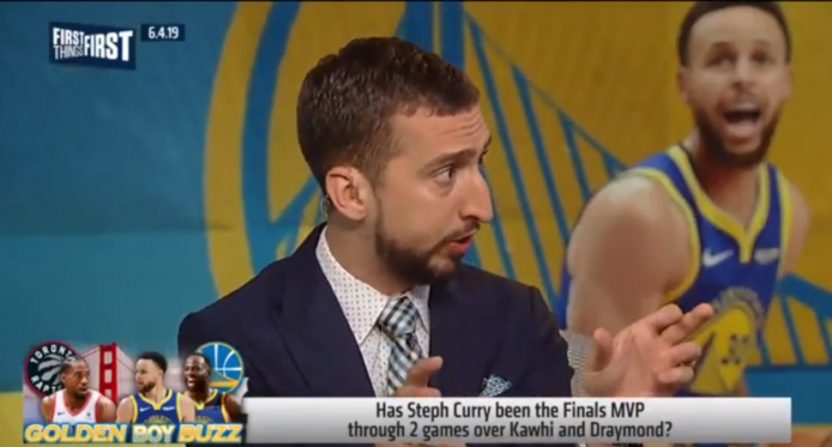 Whoever’s running the Twitter account for FS1 morning show First Things First probably should research the Streisand effect, where “an attempt to hide, remove, or censor a piece of information has the unintended consequence of publicizing the information more widely, usually facilitated by the Internet.” That came into play Tuesday, where the First Things First account tweeted a clip from that morning’s show featuring co-host Nick Wright’s claim that Steph Curry was “as close as a player has come to winning Finals MVP ever, without winning it” in 2015.

Wright’s claim in that clip is that the initial 11 votes were split: four for Andre Iguodala (who actually won), four for LeBron James and three for Curry. He then claims that a revote led to Iguodala’s win. Well, NBA senior vice president (communications) Tim Frank called that out in strong terms, saying “This absolutely never happened.” And the FTF account then deleted their clip:

This absolutely never happened. No media member, including any voter, was privy to those results until they were announced on the court. The results were as we announced – Iguodala 7, James 4. Also, players from both teams are always eligible to win the Finals MVP https://t.co/EpTJererej

Here is the official release and votes from the 2015 Finals. This was issued the night the Finals ended. Thanks for being a fan. pic.twitter.com/v209knok4w

For what it’s worth, here’s the clip FS1 pulled down from Twitter. It also doesn’t exist on the First Things First YouTube channel, or on the FoxSports.com NBA video page (which, you know, is supposed to “focus on using our A-list talent” as part of a brilliant strategy to fire all their writers and only post video clips from their shows and personalities). But it’s here:

A transcription of Wright’s comments:

“What’s unfortunate for Steph is none of this is a legacy discussion if he had just won the Finals MVP he should have in 2015. And I think the audience needs a reminder because it wasn’t well-reported on in the moment, it’s only been well-reported on in the years since, what happened in that 2015 Finals, the year he won league MVP, averaged more points in the Finals than the regular season, and didn’t win it. 11 ballots are cast for Finals MVP, they come in, it was four for LeBron, four for Iggy, three for Steph. And they can’t have a co-Finals MVP.”

Cris Carter then chimes in with the inaccurate information that “The NBA, a number of years ago, they said they’re not going to have a loser be named Finals MVP.” Wright comments on that with “that’s not a rule, but it’s essentially become a rule.” Frank also refutes that in his tweet above; it hasn’t happened since Jerry West in 1969, but it isn’t prohibited. Wright then talks about LeBron’s performance, and then gets back to his account of what happened.

“So, what’s been reported is that the seven people who voted for the Warriors came together and said ‘Guys, we can’t have co-MVPs. We all obviously think it should go to someone on the winning team. Who’s it going to go to?’ And since Iggy had a 4-3 vote edge, they said ‘Okay, we’ll all vote for Iggy.'” Carter then chimes in with “Well, I didn’t know that,” appropriate considering the way the NBA and some of the writers involved since disputed this. Here are some refutations of that from writers who voted for Iguodala:

This is laughable. Tough to “come together” when voters are sitting at their press seats in different spots around the arena and an NBA rep grabs your ballot before the buzzer sounds. https://t.co/j6eJ1Dr8m0

As someone who voted for Andre, this is laughable – as @MarcJSpearsESPN said. There is no group collaboration. Also, there’s no rule that a losing player can’t win. Tin foil hats though… https://t.co/z3NmjPGq4s

What’s particularly weird about this is how Wright presented his claim not as personal knowledge, but as something that had been “well-reported on in the years since.” There doesn’t seem to be anything to back that up, and so FS1 viewers (and those that saw the clip on Twitter) got a conspiracy theory presented as reported fact on TV before NBA executives and writers debunked it online. For what it’s worth, Wright did apologize:

One of the perils of a mid afternoon nap is if you screw something up on TV that morning you can wake up to some of best NBA writers in the world saying you’re full of it.

I’ve now heard from multiple people I respect/trust that I was just flat wrong on this. Again, my apologies https://t.co/ihUS2frLfX

Look, mistakes happen, and inaccurate things are sometimes said on air. (Especially if you’re Stephen A. Smith, for example.) But there’s a huge difference between arguing that Curry should have been the Finals MVP in 2015 (there’s certainly a case there, and if Wright had just made that case, fine) and claiming that a bunch of prominent reporters and commentators (in addition to Spears and Amick, the other voters for Iguodala were Ken Berger of CBS, Hubie Brown of ESPN Radio, Jason Lloyd of the Akron Beacon Journal, Rusty Simmons of the San Francisco Chronicle, and Marc Stein of ESPN.com) switched their votes after the fact to prevent a tie. That’s a serious claim, and one that needed some evidence to support it. And now it’s one that’s gotten even more attention thanks to Fox’s attempt to scrub it off the internet.