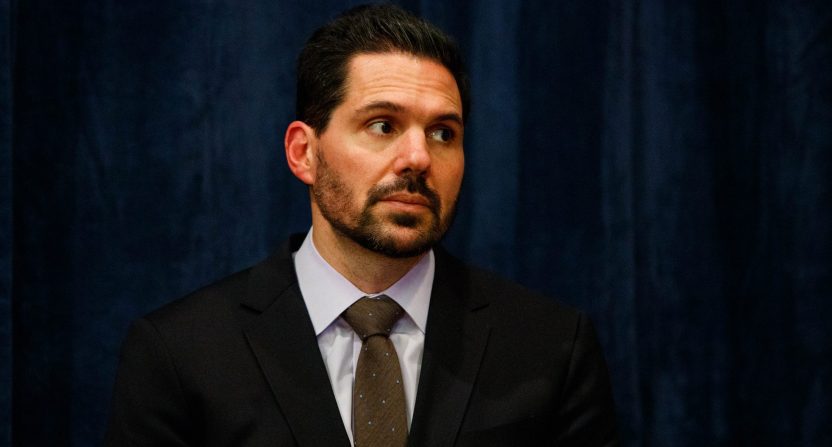 The second iteration of the XFL begins in just over a month and the league is putting the finishing touches on final preparations when they kick off February 8. The XFL has now made one more big move, as PFT’s Mike Florio reports that they will announce former NFL senior VP of officiating and current Fox Sports rules analyst Dean Blandino as the XFL’s head of officiating Tuesday.In addition to Blandino’s announcement, Florio reports that the XFL will announce their full set of rules in a Tuesday press conference. Some rules have already been revealed, including eliminating PAT kicks and replacing them with scrimmage plays, a continuously running clock (other than the last two minutes per half), and a penalty shootout-esque OT period, but the full explanation of rules should be revealed Tuesday.While fans have a negative view of Blandino from his NFL days, this was the best move the XFL could make regarding the officiating. While he had the unenviable task of explaining to teams and fans why refs made the calls they made to those who think their team got screwed over by the officials, Blandino at least gave us the official’s viewpoint of controversial calls. Plus, as someone who was the face of NFL officiating for four years, Blandino’s XFL involvement adds legitimacy to a league who is going to be fighting for relevancy and survival in their first season.Since Blandino is an NFL rules analyst for Fox Sports, there should be no conflict of him working with the XFL during the offseason. While Blandino was never named as taking part in Fox’s XFL broadcasts, it’s getting less likely he will be on the air during XFL games on Fox. This however may mean that Blandino will be there explaining referee calls after the fact, which will be important for viewers who will no doubt be learning the XFL’s unique rules in those early weeks.[Pro Football Talk]