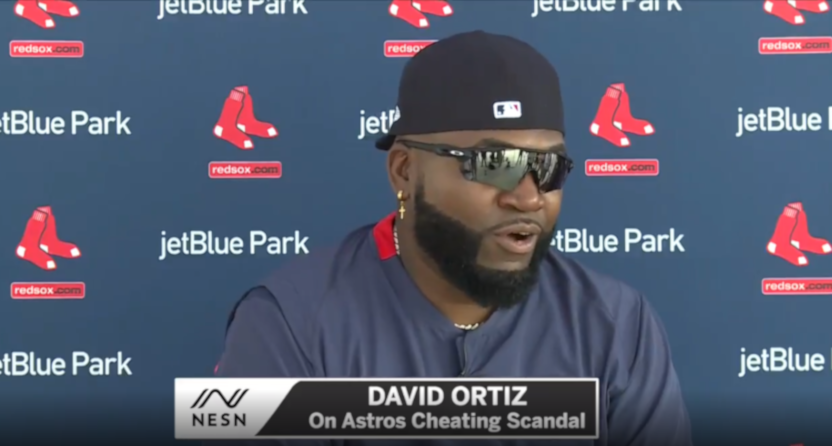 The Houston Astros’ sign-stealing saga has seen a lot of problematic public statements from Astros’ players and MLB commissioner Rob Manfred, but something that’s been perhaps particularly surprising is the number of players-turned-analysts who have criticized not the Astros for cheating, but rather Mike Fiers for blowing the whistle on it. And, interestingly enough, many of those doing this have also held roles with teams. Softball player turned ESPN analyst and New York Mets’ consultant Jessica Mendoza went after Fiers in January in a remarkable loss-of-credibility tour across ESPN platforms, saying that Fiers “ratted out” the Astros, while MLB Network/TBS analyst and Boston Red Sox special assistant Pedro Martinez called Fiers “a bad teammate” later in January. And now, Fox analyst and Red Sox special assistant David Ortiz went in on Fiers Thursday at the Red Sox’s spring training facility in Fort Myers, Florida:

Here are some of those comments, as transcribed by ESPN’s Joon Lee:

“I’m mad at this guy, the pitcher who came out talking about it,” Ortiz said at JetBlue Park on Thursday. “And let me tell you why. Oh, after you make your money, after you get your ring, you decide to talk about it. Why don’t you talk about it during the season when it was going on? Why didn’t you say, ‘I don’t want to be no part of it?’ So you look like you’re a snitch. Why you gotta talk about it after? That’s my problem, why nobody said anything while it was going on.”

Much of this is straight from the comments Mendoza and Martinez already made, saying concerns about the Astros’ blatant violations of MLB rules should have been expressed internally rather than through the media, but there are several problems with that line of thinking. For one, reporting from Jared Diamond of The Wall Street Journal indicates that former Astros’ GM Jeff Luhnow repeatedly discussed the “Codebreaker/Dark Arts” scheme (and that “Dark Arts” was a line item in the team’s 2019 budget), and former Astros’ manager A.J. Hinch admitted to Tom Verducci of SI and MLB Network that he didn’t take action to stop the scheme after he found out about it. So two of the Astros’ most important people (to say nothing of the high-level people involved in operating it) were at least aware of this scheme well before Fiers brought it to the public and didn’t shut it down, so who exactly internally was Fiers supposed to go to to stop this?

And as for making complaints to MLB, Barry Svrluga and Dave Sheinin of The Washington Post reported earlier this month that “10 to 12 teams had complained to MLB about the Astros over the years,” and that “it was a big open secret, really big.” Yes, perhaps there would have been a more impactful response from MLB earlier if a player like Fiers had come to them, but judging by how poorly MLB has handled this investigation, this punishment, and commenting on this scandal, they don’t really seem like an organization that was worth going to with this. (And it’s notable that MLB buried much of the information involved here and then got mad at the reporter who released it, so yeah, they’re really trustworthy.) Fiers taking this to the media (specifically, to Ken Rosenthal and Evan Drellich of The Athletic) likely made a much bigger impact than any internal complaint would have.

And while Fiers’ timing can be debated, that’s not a clear right-and-wrong scenario. Yes, Fiers left Houston after the 2017 season and signed with Oakland, so there’s an argument he could have gone to the media immediately after signing that deal. But there’s also an argument that he was waiting to see if the many teams complaining to MLB would have an impact and only went to the press once that didn’t get far. In any case, regardless of Fiers’ motivations for coming forward at the exact time he did, his decision to bring this to the media proved to be incredibly necessary for baseball, even if Mendoza, Martinez and now Ortiz don’t see it that way.

It’s also quite interesting that all three of Mendoza, Martinez and Ortiz have/had roles with clubs. Mendoza gave up her role with the Mets earlier this month as part of the demotion billed as a promotion she got at ESPN, but Martinez and Ortiz remain employed by the Red Sox in addition to their work as broadcasters. And it’s interesting that there aren’t as many people mad about their double roles (or those of others, like MLB Network analyst/Mets’ consultant Al Leiter) as there were with Mendoza. It’s possible that these bad takes on Fiers and whistleblowing come just from these analysts being former players and still thinking like former players rather than media pundits, but it’s also possible that their ongoing work with front offices plays a role in their team-first thinking. And that should raise further discussion of if it’s appropriate for people to hold broadcasting and club roles at the same time. Heck, even Jose Canseco had a better take on this than Ortiz:

Mike fiers the truth is never wrong no matter when you say it…its never to late for the truth…big papi I am a fan since the first time I met you in Minnesota but get off this kid ,you made it through the ped era…

(The “you made it through the PED era” may be a shot at the 2009 New York Times report that claimed Ortiz was among those who failed a PED test in 2003, something Ortiz continues to dispute.)

At any rate, this is just the latest case of a player turned analyst and front office consultant relaying a horrible take about Fiers. But it probably shouldn’t be expected that this will lead to much. While Mendoza wound up with that demotion-disguised-as-promotion after her Fiers comments, those weren’t necessarily all that was going on there (there was already a lot of pressure on ESPN to shake up the Sunday Night Baseball booth), and there’s been no impact for Martinez other than some criticism. It seems likely we’ll see the same with Ortiz, and that deciding to bash an important baseball whistleblower won’t affect his studio work, his front office job, or his various endorsements. Smaht pahk indeed.