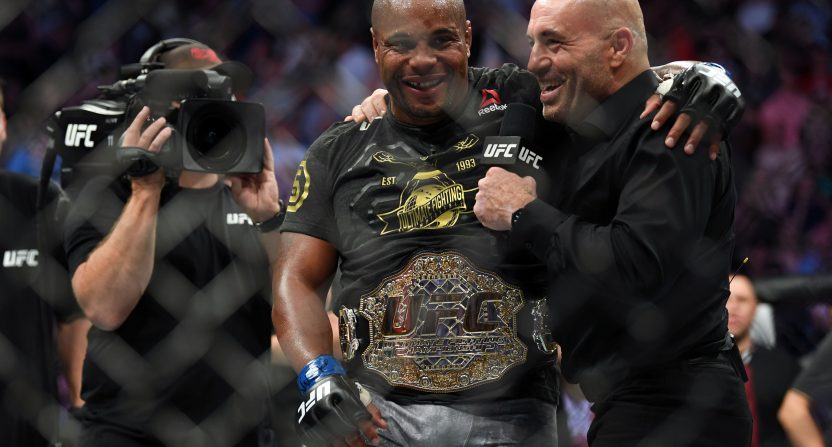 UFC Heavyweight and Light Heavyweight Champion Daniel Cormier loves WWE and hasn’t made that a secret over the years. That’s why it wasn’t so surprising when Cormier revealed that after his Heavyweight title defense at UFC 230, he will audition in Orlando for a WWE commentary role.

Daniel Cormier reveals to @sportingnews that we may see him in WWE soon when he tries out for a commentary position. Also, he explains what would happen in a WWE match between him and Brock Lesnar (hilarious). pic.twitter.com/PCzlTF9of4

What may be surprising is that Fox is rumored to be the entity pushing Cormier to the audition. According to Uproxx and Wrestling Observer Radio, Fox loves Cormier and wants him in a commentary role when they start airing SmackDown in October 2019.

“The Cormier thing is, Fox wants Cormier. That’s the deal. That’s where that (news) comes from. Vince isn’t yelling as much at the guys on Smackdown every week, because Vince doesn’t go to Smackdown that much anymore. And they want him (Cormier) for Smackdown. Although when Smackdown’s on Fox on Friday, that may all change. He (Vince) may be at every Smackdown again. But Fox wants Cormier, that’s the deal with Cormier. Because number one, they want more of a sports presentation, and number two, they love Cormier from the UFC, and they don’t want to lose him. So that’s what that is about.”

It’s been an open secret over the past week that Fox wants to make major changes to SmackDown once they have the rights next year. In addition to moving it to Friday and creating a four day block of sports from Thursday to Sunday, Fox wants SmackDown to be presented as more of a competitive sport, instead of the usual sports entertainment style of product that WWE provides.

Cormier’s potential inclusion on the commentary team fits into Fox’s plans. Him working with WWE would be perfect cross-promotion if Fox was keeping the UFC, but in mere months, the promotion is heading to ESPN. Despite losing those rights, Fox loves Cormier enough that they want to retain his services.

This seems like a deal that makes sense for all sides. As a WWE fan, a commentary position has to be a dream job for Cormier. Considering he’s turning 40 next March and is already talking about his post-fighting plans, this could be an ideal way for him to transition into the next part of his life. For WWE, Cormier provides another link between WWE and UFC, following in the recent footsteps of Brock Lesnar and Ronda Rousey (and decades ago, Ken Shamrock). Given Cormier’s feud and upcoming UFC fight with Lesnar, including that post-match confrontation after UFC 226, WWE would love to be involved going forward.