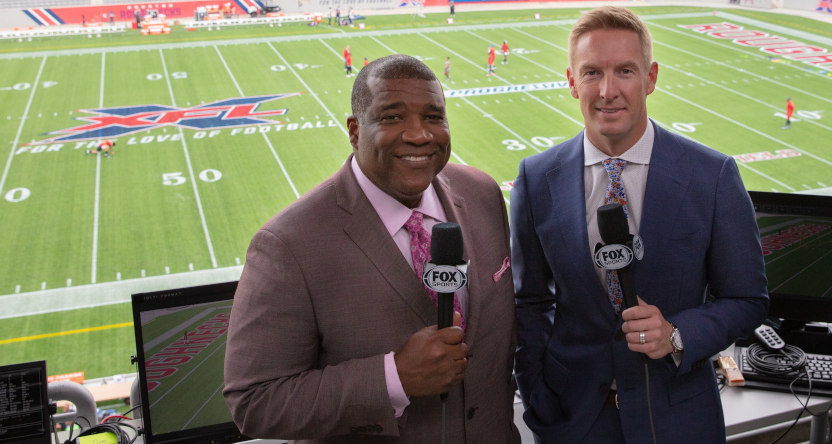 Fox Sports’ top broadcasting team for the USFL will look familiar to those who watched XFL coverage on Fox in 2020. The partly Fox-owned USFL starts its season on April 16, with the opening game simulcast across Fox and NBC; NBC will produce the pre-game, halftime, and post-game studio coverage there, while Fox will produce the game broadcast. And while we don’t have specific commentator assignments yet, it seems like that kickoff will draw Fox’s top booth. And John Ourand of Sports Business Journal reported Monday that the top booth will be Curt Menefee and Joel Klatt, the same team that was the network’s top XFL booth in 2020 (as seen above during a Feb. 8 game):

I’ve learned that Curt Menefee and Joel Klatt will be Fox Sports’ top USFL announcing team this season. Menefee and Klatt will be in the booth 12 days from now when the league kicks off with an opening game that will simulcast on both Fox and NBC.

Fox Sports is expected to make an announcement on Menefee and Klatt within the next two weeks, along with the other play-by-play, analyst and sideline reporter teams for the new league. The league officially starts April 16 at 7:30pm ET when the Generals and Stallions play each other from Birmingham.

Of course, Menefee and Klatt have other notable roles at Fox too. Menefee has been hosting the network’s primary pregame NFL show, Fox NFL Sunday, since 2006 (he shared hosting duties with Joe Buck that year, but has been the primary host since). Klatt is the network’s top college football analyst. But both of those responsibilities are fall-focused, and they both clearly have strong football backgrounds, and they did well on alternate league coverage two years ago. We’ll see how they do with the USFL, and who else Fox winds up using on USFL broadcasts.